The border crossing went pretty smoothly. We had arrived in Albania, the land of bunkers!

We continued on our journey to Tirana. The roads weren’t quite as good as in Kosovo. A lot of roadworks with not a lot of work going on. There are some good stretches of two lane dual carriageway but there are numerous sections where bridges are under construction so it goes to two way road.

At one point I saw a random dog walking around in the middle of the carriageway, I saw people walking cattle in the road and in some areas there were lot of goats close to the edge of the road.

The closer we got to Tirana the worse the road got. The dual carriageway seemed like a distant memory.

The road wasn’t that wide with homes and businesses lining either side, most of the cars seemed like they were in a rush and insisted in overtaking and going a lot faster than our satnav said the speed limit was.

By the time we approached the outskirts of Tirana the traffic was very busy and in my opinion the drivers were crazy.

There were about 4 lanes of traffic approaching a roundabout, I think I was in the third lane, it was a total free for all. Cars forcing their way out of junctions in front and everyone cutting each other up. I am so glad I got to drive in Macedonia first; if I’d have driven in Albania first with no ‘right hand side of the road’ practice driving it would have been hell!

Getting cut up on a roundabout!

Finally we arrived of the street where our apartment was, it was pretty narrow with cars parked either side of the road. We had to do a loop round the block because we couldn’t find the apartment, I had to pull over while Keith went to find it. The apartment was fairly nice, we had a room each but the WIFI was pretty crap.

By now we were pretty shattered but decided to take a wander into the city, one reason being we needed to withdraw some money out to pay the apartment owner.

Tirana is definitely not built for pedestrians! Busy traffic everywhere.

There were lots of people about and it wasn’t long before we got approached by a guy who span us a story about how his brother was working in the UK but he couldn’t get a Visa etc, basically he wanted some money – we told him we’d only just arrived so hadn’t even been to a cash point yet. This didn’t bother him! He said if we went with him we could pay him by credit card!! We declined his offer!

We wandered around for a while, then went in search of food, Keith wanted some sort of street food but there didn’t seem to be anything like that, it had been a very long day, we were so shattered so we to returned to the apartment. We used to WIFI to find a close restaurant.

The restaurant we went to was quite posh but being Albania to us it was very cheap. Afterwards we headed back for an early night.

3am I was awoken but chanting bellowing out from a local mosque! I recommend wearing ear plugs when staying in Tirana city centre!!!

I started getting a bit of a cold over the previous few days and now my nose was so bunged up, not really what I wanted whilst on holiday. The shower had warm water which was a result can’t say the same for the temperature of the apartment, it was freezing.

Unlike Macedonia and Kosovo we had no pins plotted on the map for Albania so we literally free to wander around and wing it. We got some food in a fake McDonalds. Being a vegetarian there weren’t many options for me so I went for salad and chips! Neither of which were very nice. Keith wasn’t a fan of him burger either.

We checked out the Pyramid of Tirana, although I think its derelict (least it looks it), it is still one of the main tourist attractions on the map! There were people right at the top, we thought about climbing it but decided against it as didn’t want to risk getting arrested! 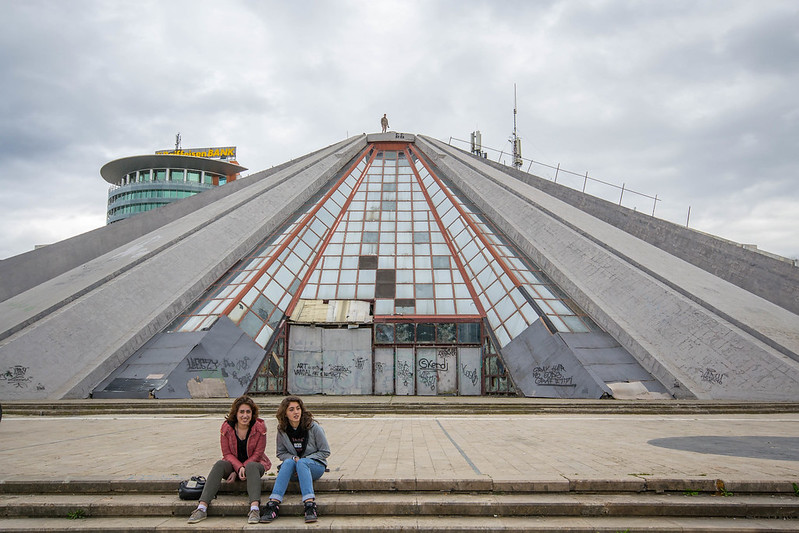 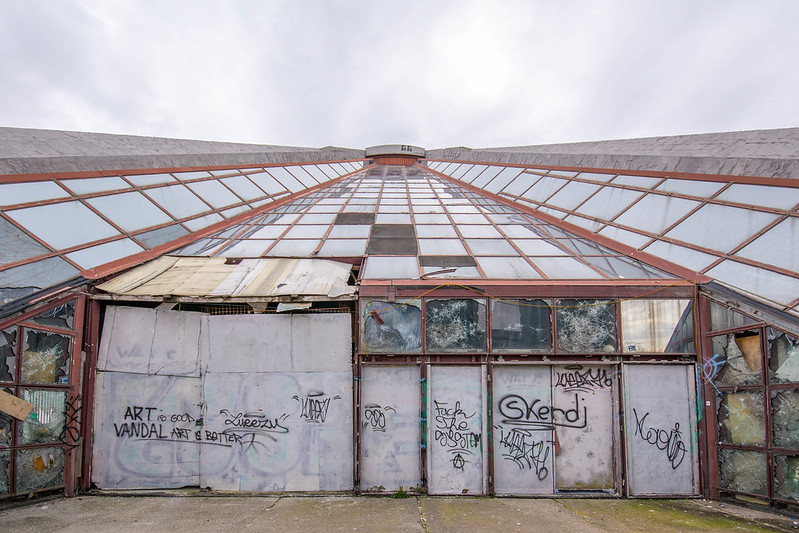 Tirana doesn’t seem to have a main high street with big shops on it just a lot of roads with busy traffic and smaller shops.

There is a stream running through Tirana with various bridges over it and I pretty certain it is raw sewage, I’ve had the pleasure of working at sewage works and it smells the same. (According to Wikipedia I am right, it is called the Lanë “Although once clean, it now carries sewage”).

There is meant to be a small bunker, some pillars from a mine and slice of the Berlin wall somewhere but it’s definitely not where my phone thought it should be.

To get away from the traffic and give Keith a bit of a bird watching fix we headed for the Grand Park of Tirana.

We came across a concrete amphitheatre which was looking a bit sort for itself, there were viewing towers either side and we thought it a bit rude not to climb them. 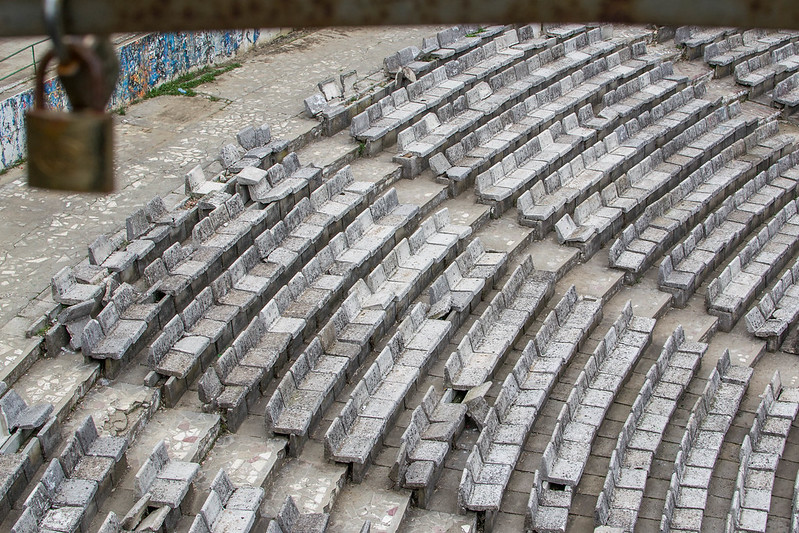 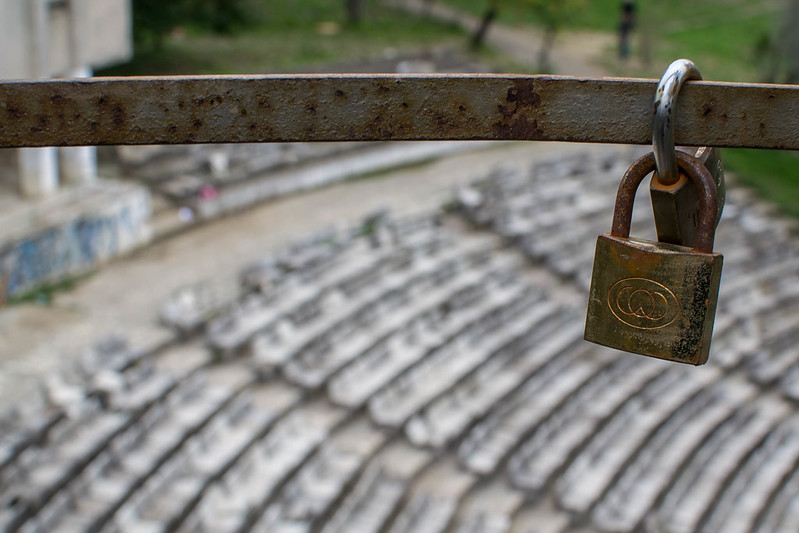 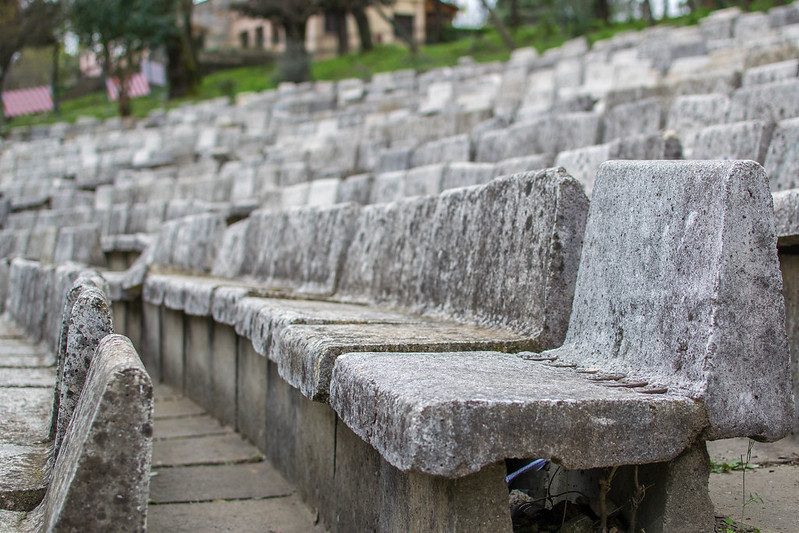 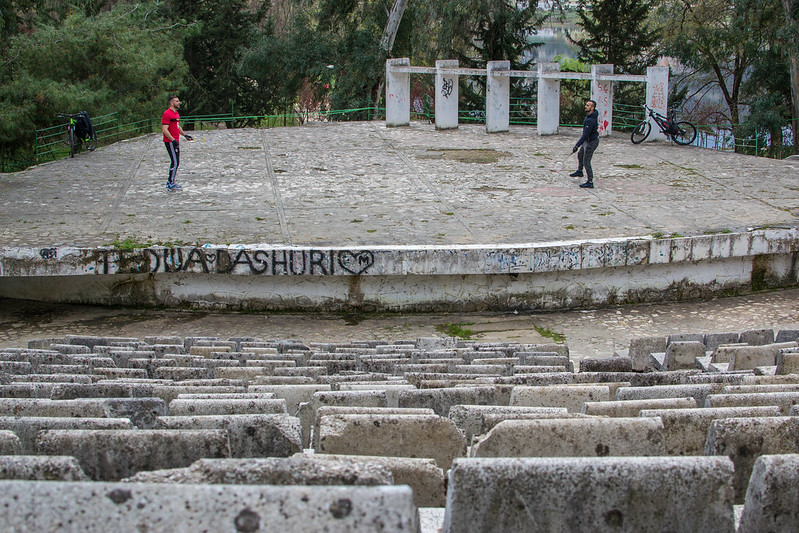 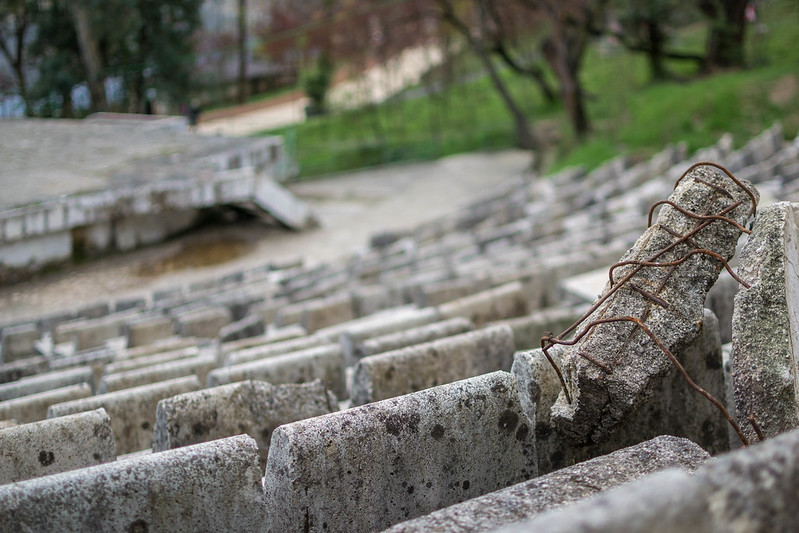 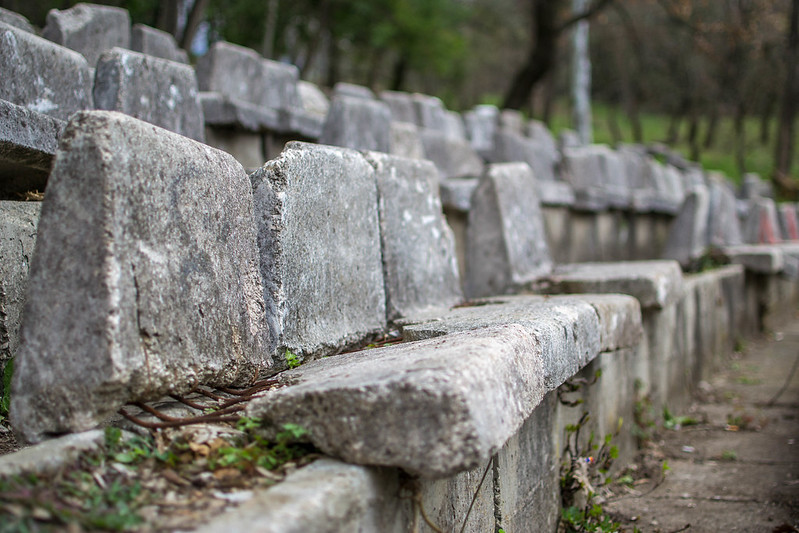 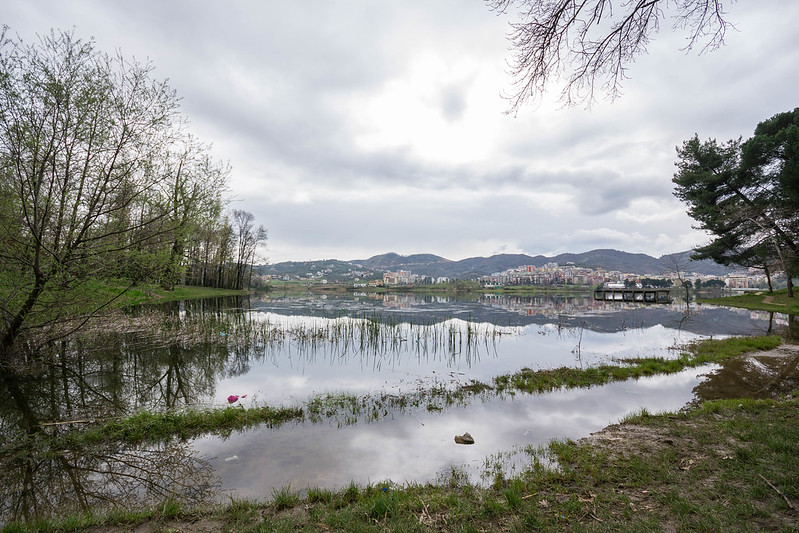 The sun was out and it was getting warmer, I even took my coat off!!

I sat on a bench for a bit with a dog while Keith shot some birds (obviously with a camera not a gun).

The maps.me app said there was a shopping mall the other side of the park so we headed there, again the app was totally wrong, Keith turned on his data to check where it really was and it was 3 or 4 miles further up the road!

We found an area with lots of gift shops so got ourselves some souvenirs including ash trays in the shape of little bunkers and a postcard of a got sitting on top of a bunker. Wish I could get a photo of something like that!

I wanted a photo of the national history museum but there was so much traffic the other problem was that it has a bus stop outside. We waited and waited till the bus left but it only left when another one pulled up behind it to take its place! Rubbish.

Mural on the national history museum

It was Friday, so we planned give the local nightlife a look. We chilled out in the apartment for a bit, got ready and went in search of a restaurant (when I say chilled out, I literally mean chilled, the apartment was freezing. There was no central heating, had to both huddle around a tiny electric heater in the living room).

It was warmer outside than in our apartment so almost sat outside at the restaurant but opted for inside which may have been the wrong choice as it was freezing in their too!

The Blloku area is supposed to be the best place for nightlife so we headed in that direction. The first bar we went in was Irish themed, the kind of place I’d usually avoid but because it was busy we gave it a look. It had the typical European table service.

Next we had a drink in a small ruin bar while we worked out where to go next. It was meant to be a fun night but I was getting stressed because we couldn’t find places we were looking for as like usual they didn’t seem to be where they were supposed to be!

We stumbled on the memorial installation that we were looking for earlier with the bunker, Berlin wall and concrete pillars from a mine, it was nowhere near where my map say it was. I have since researched this and apparently this memorial is named PostBlloku, which gives away its location! It contains three important symbols : the wall that divided Europe, the mentality of Albania’s communist regime (the bunker) and the pillars from the copper mine at Spaç where hundreds forced labourers, who were alleged enemies of the state lost their lives.

There was a bar/club that looked very busy we tried to get in but men can only get in if they are accompanied by women!

Using a cached google map I finally located the bar we were looking for – Checkpoint Charlie.
We were escorted to a table upstairs as apparently it was too busy downstairs. We had few drinks, the music and atmosphere were pretty good. The toilet situation was not good. One toilet for men and one for women with the cleaner letting you in and out so there was lot of queuing. We made our way back to the apartment a little tipsy, Keith fell over en route!

Keith was feeling pretty worse for wear, I wasn’t feeling hungover, just ill, my cold was possibly even worse, I was so bunged up but we had to hit the road. We decided we would stop off at the mall that we didn’t go to the day before where we could get some breakfast before the incredibly long drive back to Skopje.

The mall was alright but I didn’t find anything I wanted to buy.

Being in a car hungover is never good but the winding mountain roads made this 10 times worse. We had to stop at one point for Keith to have a quick lay down!!

I wanted to get at least one photo of an Albanian bunker before we left the country, we had seen quite a few on our journey but none near enough to the road to get a snap. Our prayers were answered, one right next to the road. 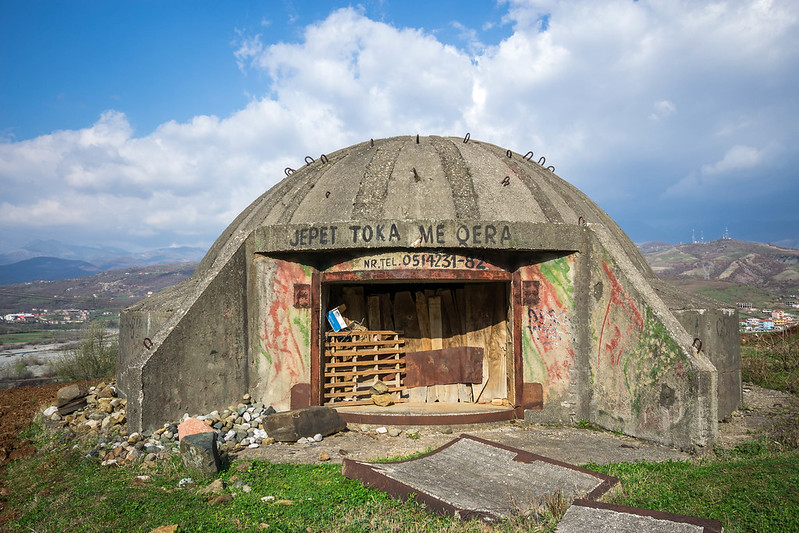 Over 700,000 bunkers were built between 1967 and 1986 during Albania’s communist era. They were commissioned by paranoid dictator Enver Hoxha, one for every four inhabitants. 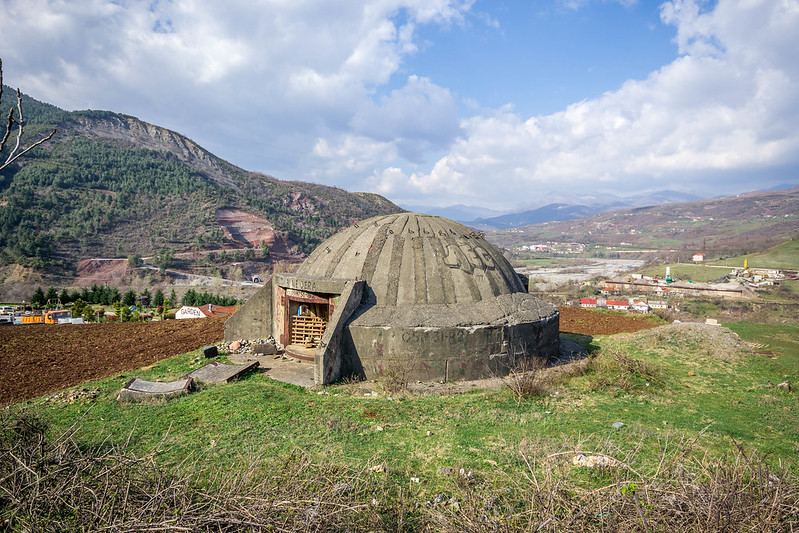 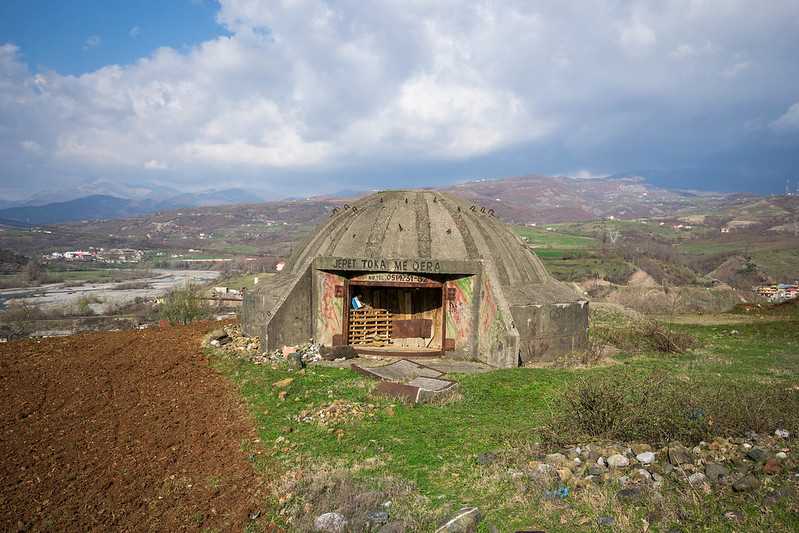 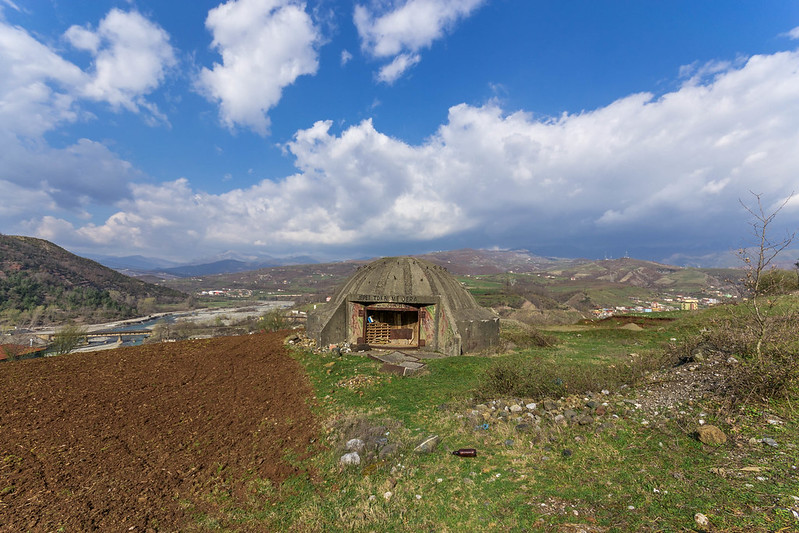 We passed a star monument with a donkey tied to it, we had to turn round, stop and get a couple of snaps. Not quite a goat on a bunker but pretty good all the same. 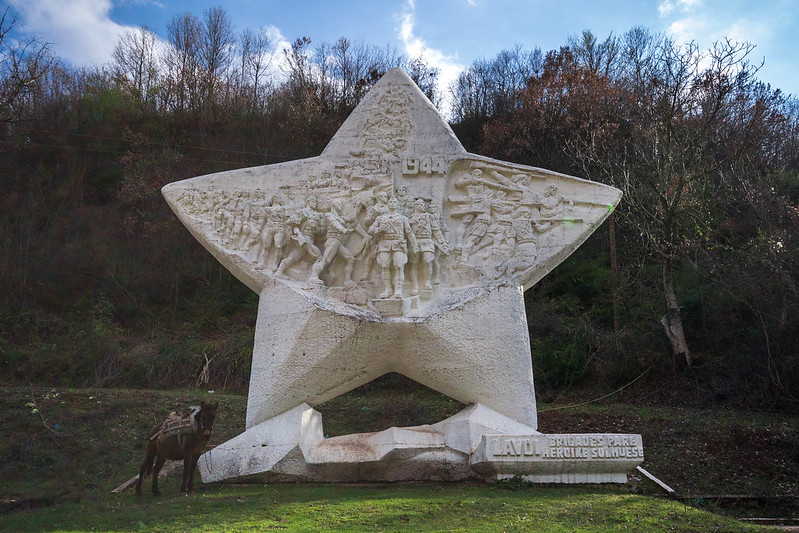 Very close to the border we spotted a load of bunkers on a hill next to the road, we pulled over and went to investigate. We kept spotting more and more further up the hill. After getting a few pics we made our way to the border.

Time was getting on, we had planned to have a short stop off at Ohrid lake, a lake straddling the border which was meant to be very picturesque but there was still a long way back to Skopje so we abandoned the idea.

This crossing did not go smoothly. We were made to drive into a warehouse where a grumpy stern Albanian man who spoke very little to no English searched our luggage and the car then raised the car up and proceeded to shine a torch all round it. Luckily we had hidden all the drugs and guns well enough for him not to find them! (Joke).

He searched for what seemed like an eternity and we thought we’d be stuck there forever! Eventually another man came in, he spoke good English and was really friendly!!! They lowered the car down and sent us on our way.

We were back in Macedonia.