The fourth destination in our European adventure was Austria’s capital Vienna.

After a nice chilled out journey, the train pulled into Wien Meidling Station. Keith’s Clarity card was still maxed so I had to resort to drawing cash out on my card. I decided to get 100 Euros out, either to split between the guys or keep myself. The problem was that the cash machine gave me a €100 note and we needed to get a taxi to our hotel. 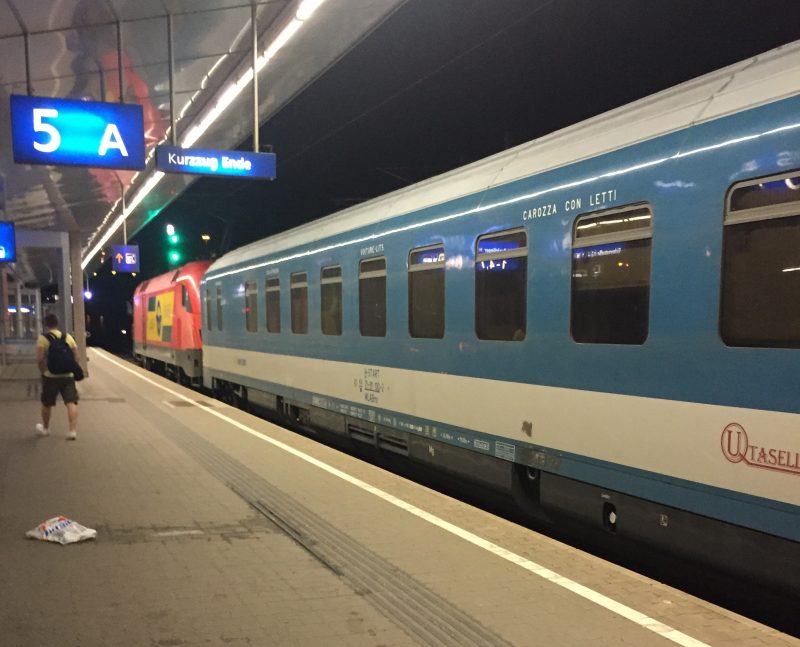 McDonald’s was next to the station so managed to split it there. There was one taxi outside the station, we didn’t really have a lot of options, so enquired how much it would be, I don’t remember it being that cheap. It took us too the Pension Excellence hotel. The man on reception said he was new but seemed nice and helpful.

I woke up went to bathroom, tripped up the step which woke the others up with my cursing.

We went for the buffet breakfast provided by the hotel which wasn’t bad.

We decided to try plan the next few days destinations, hotels and travel. Using the wifi in hotel we researched possible travel options to get to Slovakia. Jon found a car hire company that looked very promising, they offered cross country one way hire, something that we hadn’t found before. They had a Facebook page with a few reviews, not enough to convince me it was a real company! Jon contacted them, they got back to him with some questions which he replied to, we couldn’t stay in the hotel all day to wait for confirmation so would have to check later.

Jon had also found a company who do mini bus travel between Slovakia and Poland so contacted them too.
We planned to go to Slovakia’s capital Bratislava for one day followed by a day in the mountains. On the map we picked the city of Kosice as it was fairly near the mountains to drop the car off and get a mini bus to Poland. The hire company and bus company wanted an address for the drop off/pick up so we found a Tesco Extra store!

For accommodation in Bratislava we booked the boat hotel Botel Gracia on the river Danube.

Wandering in Vienna city centre we discovered it was very different to other all the other cities we’d visited, walking just a few minutes up the road from our hotel there was a pedestrianised street with shops, something we struggled to find in the other cities. It seemed to be an area really posh designer brands stores, walking a bit further we came across less posh shops and lots of souvenir shops. 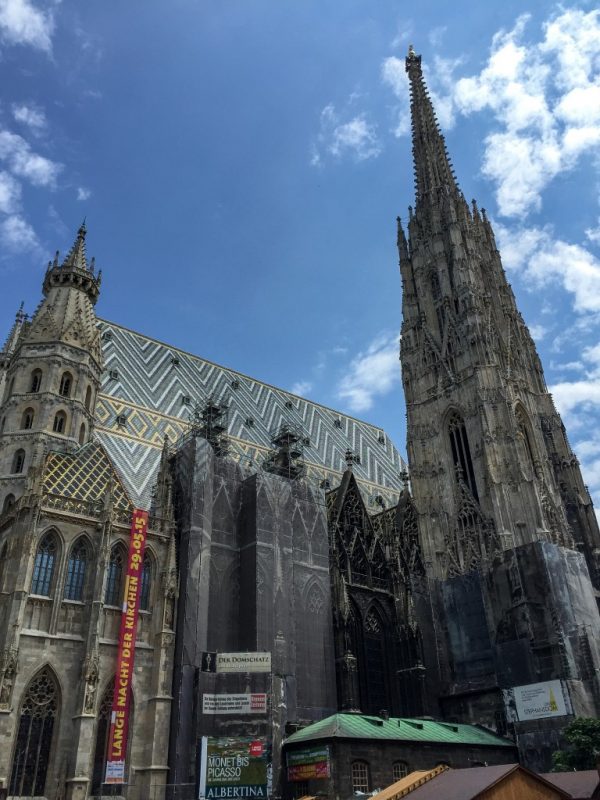 It was getting really hot now so to try and change cool down a little me and Jon decided to get vests from H&M, we tried to convince Keith to buy one but instead he took the piss because we both got the same colour.

We passed some of the historical buildings listed in the guide leaflet picked up from the hotel. On our search for a random market Jon had seen on the map, we ended up near a fountain and colleseum type thing. 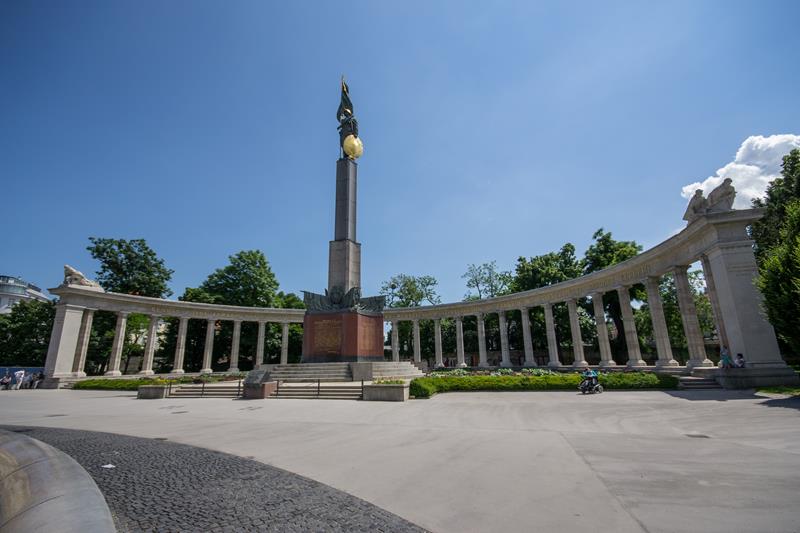 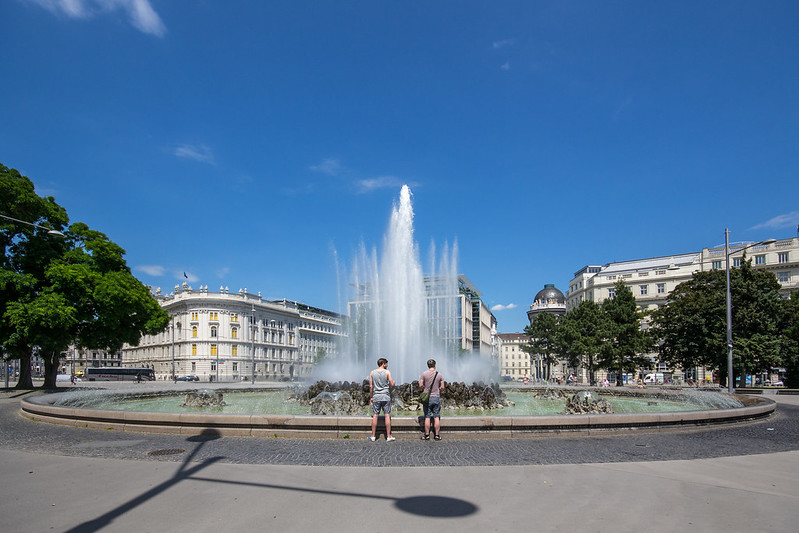 We were dying of thirst as it was at least 26 degrees outside so stopped at a little bar for a soft drink and some wifi. Once rehydrated we made our way to fountain then off towards a market via a quick stop off at Karlskirche (St. Charles’s Church). 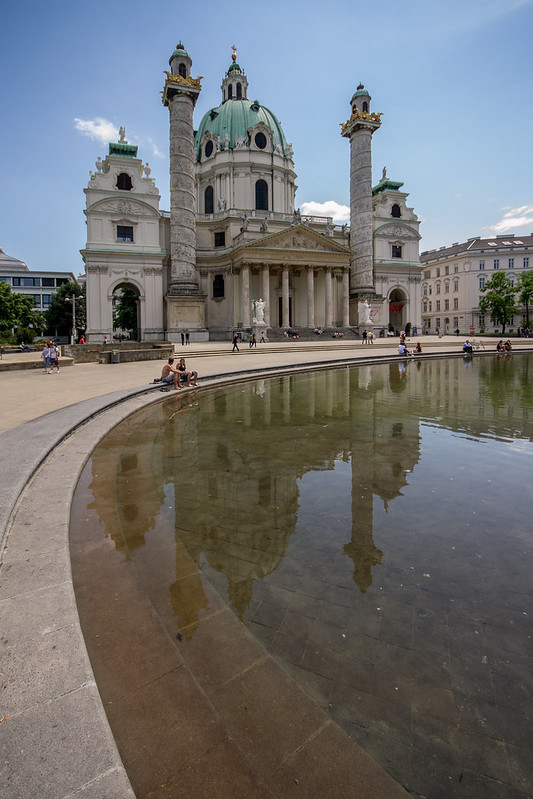 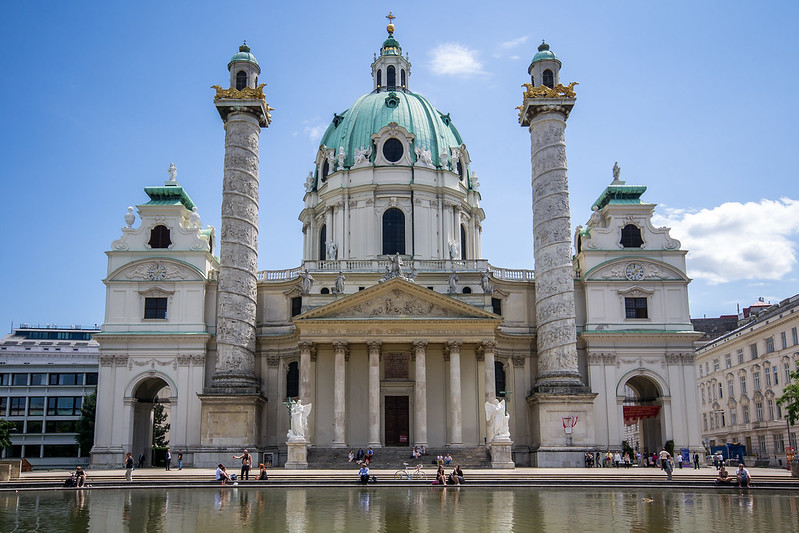 The market was mainly food stalls with lots of people offering free samples to tempt you into buying something.

Next we headed to one of Vienna’s flak towers, it was a massive concrete tower with circular platforms protruding from the top of it. Flak towers were above-ground, anti-aircraft gun blockhouse towers used by the Luftwaffe to defend against Allied air raids on the cities during World War II. They also served as air-raid shelters for tens of thousands of people and to coordinate air defence. (Info from Wikipedia). After seeing lots of war time stuff in the UK it was interesting to see something from the other side. 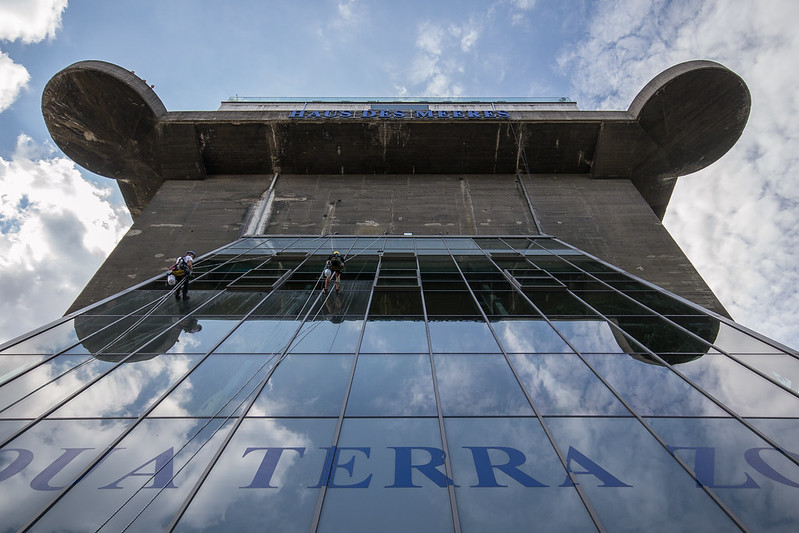 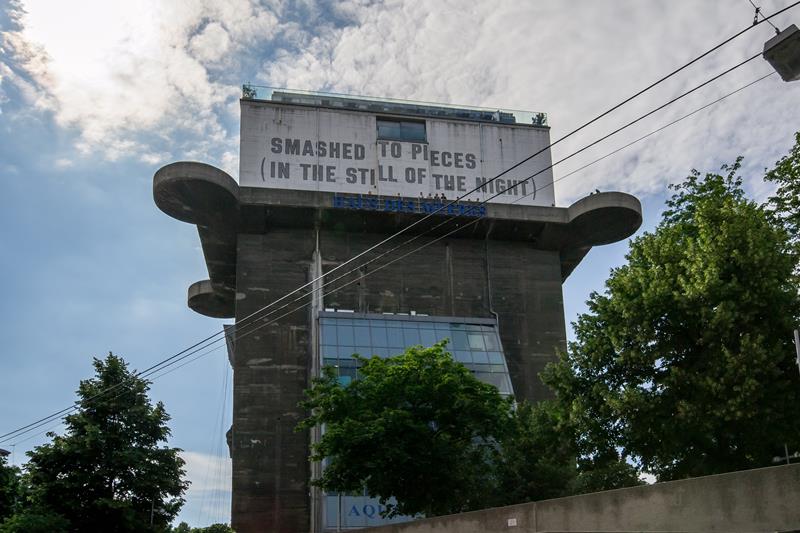 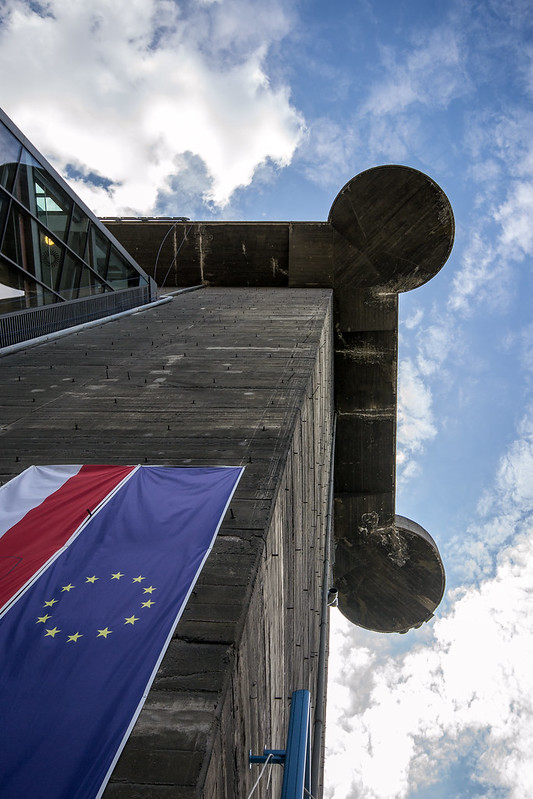 This tower was now being used as an aquarium. You could also pay to go to the top so we did.

The views from the top were amazing. 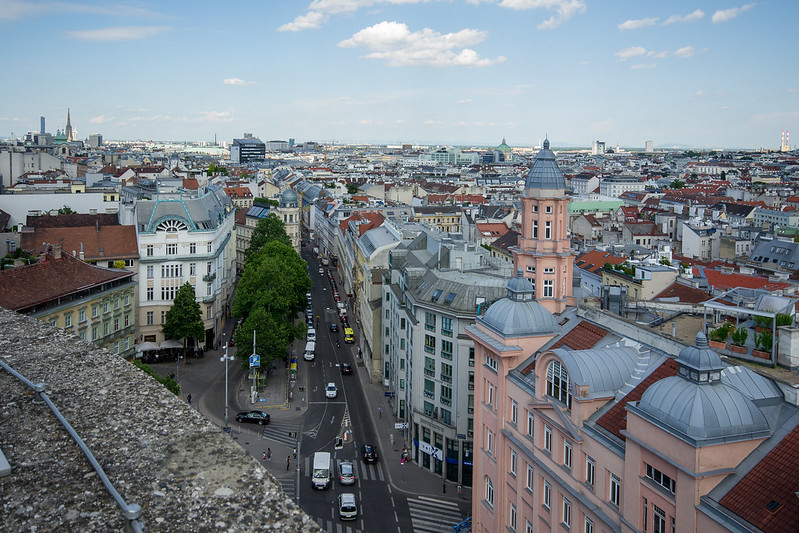 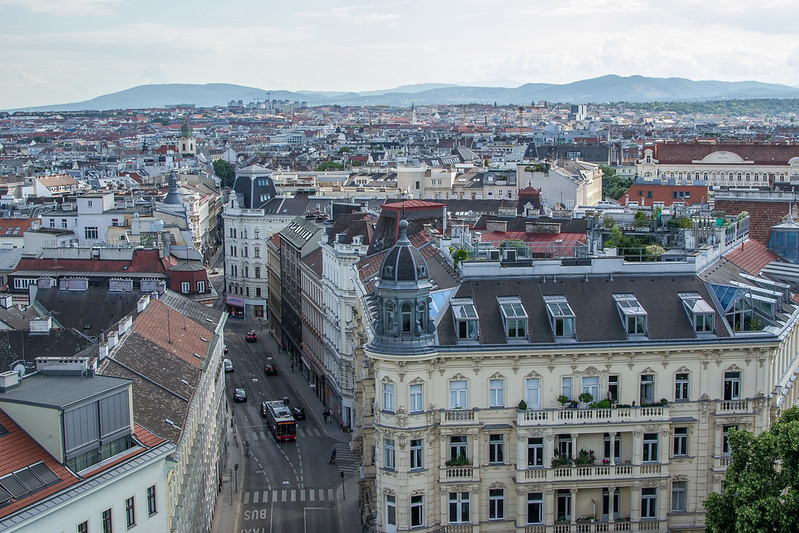 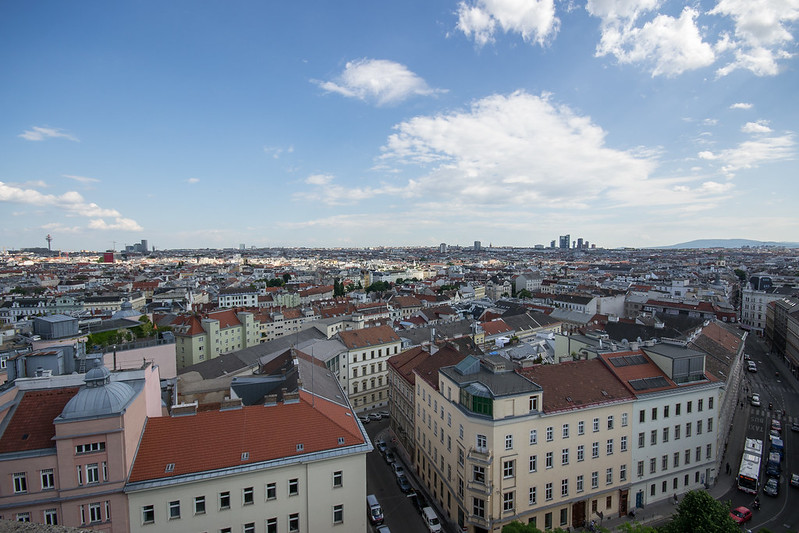 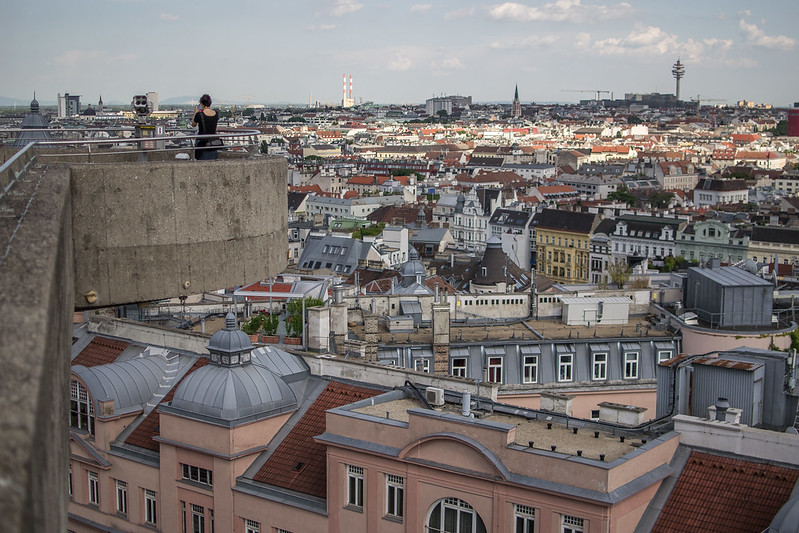 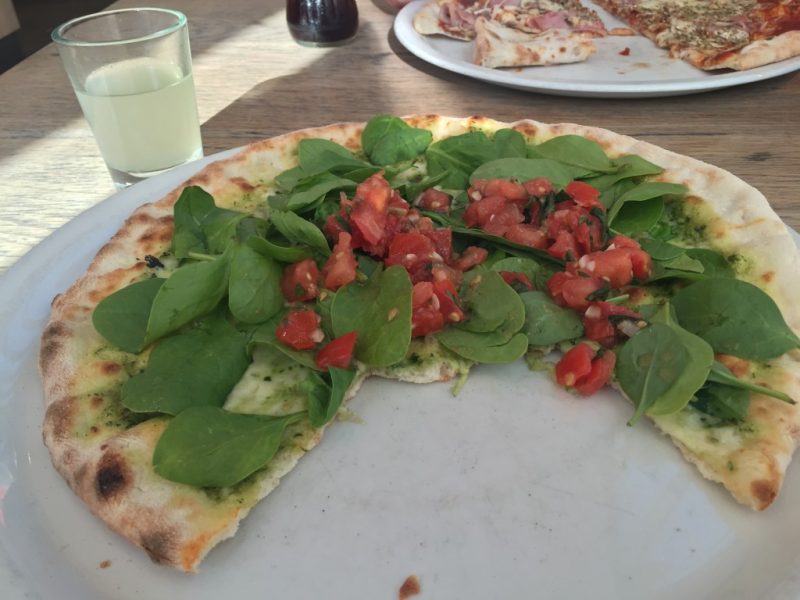 Got some food in a Vapiano.

This evenings adventure was couple of tram rides to the outskirts of Vienna centre. It was the Wotruba Church, a church built in a brutalist style out of 152 concrete blocks. It is at the top of a hill in an area of housing, looking out over the city. It’s the strangest church I’ve ever seen but pretty cool. It was built between 1974 -1976. The guy who designed it, Fritz Wotruba unfortunately died a year before its completion. Find out more info here. 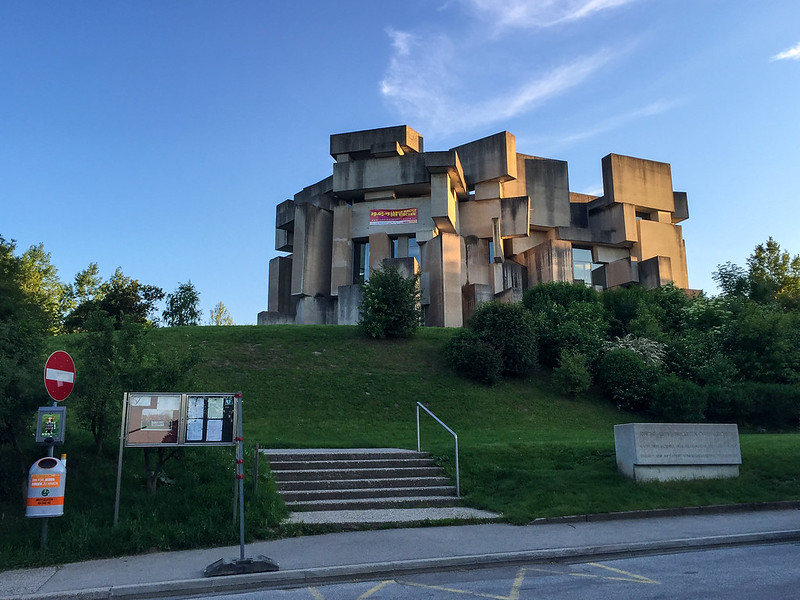 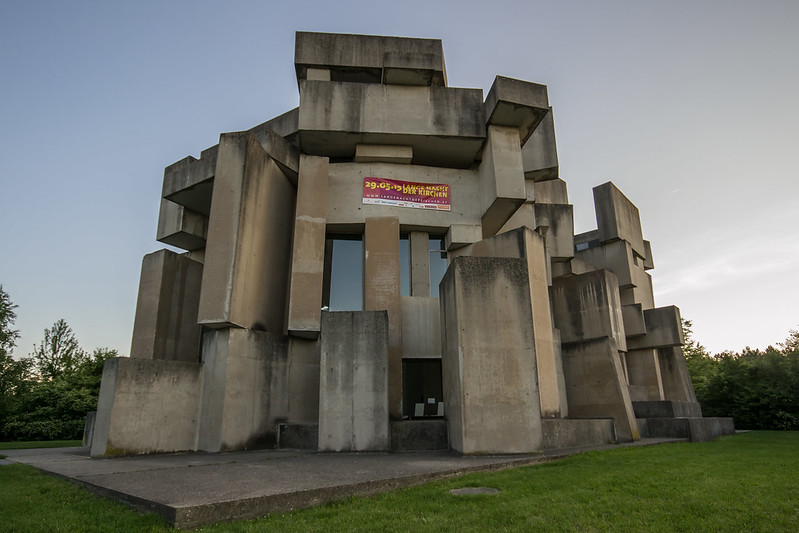 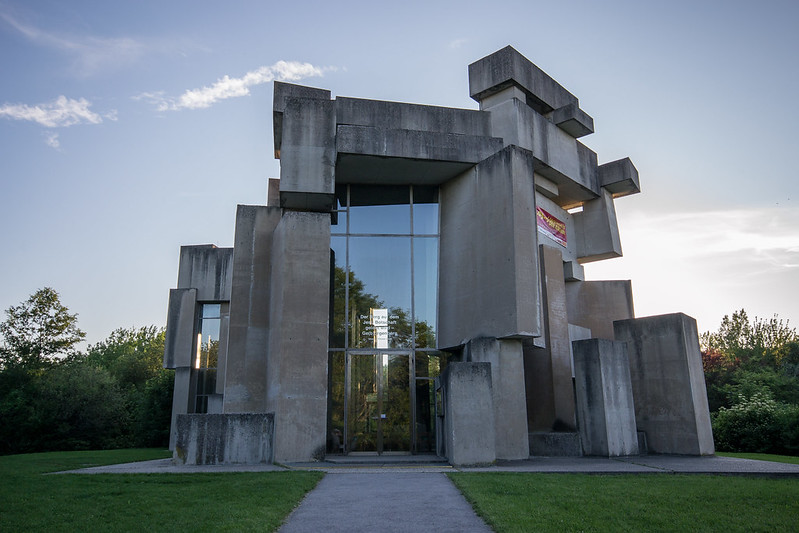 The hotel room was so hot today, with no air conditioning we had to have the window open all night, luckily the combination of earplugs and traffic noise drowned out the snoring! We got up for breakfast, car hire still not confirmed for later.

Jon rang the car hire company and confirmed the details though I was a little sceptical, seemed too good to be true!

We headed towards a park which had a couple more flak towers in it, these ones are in a more derelict state. 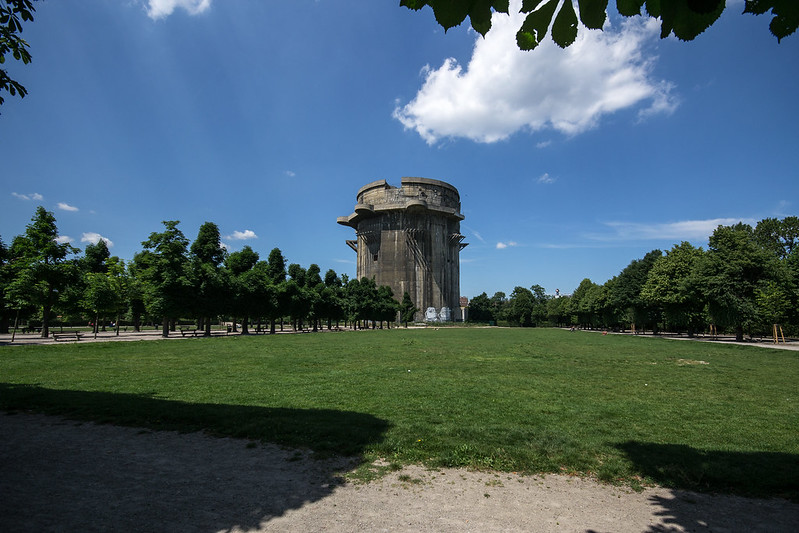 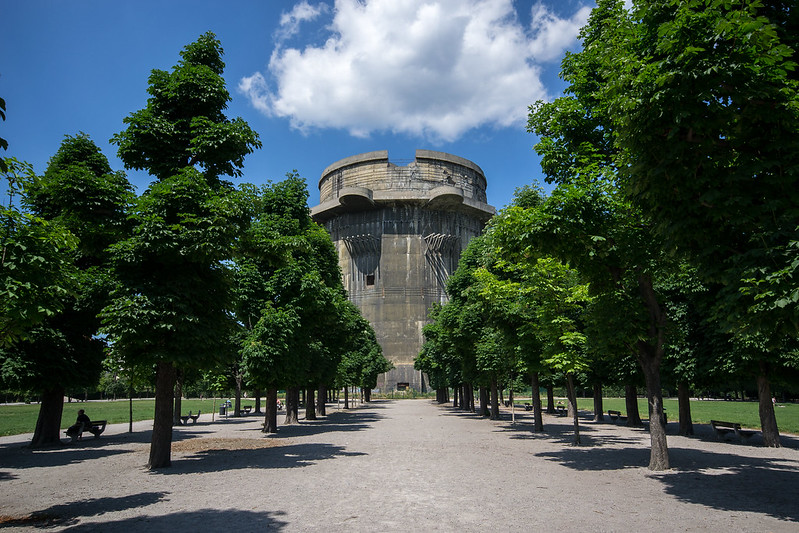 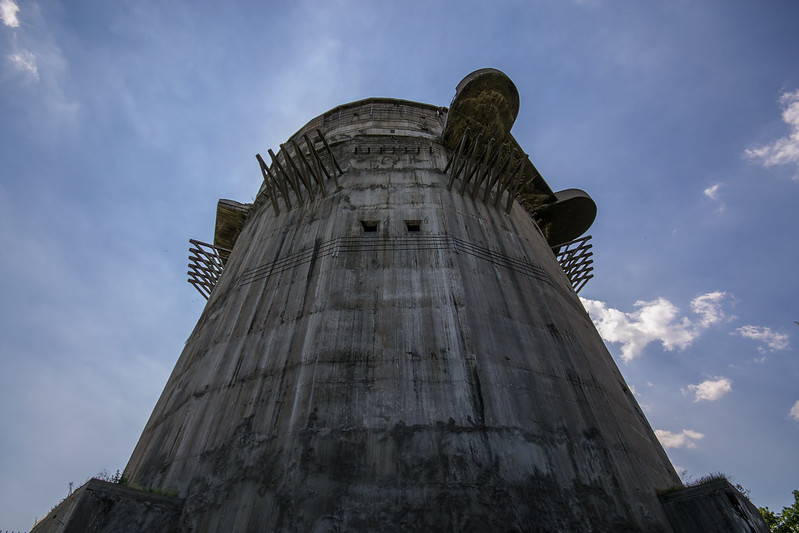 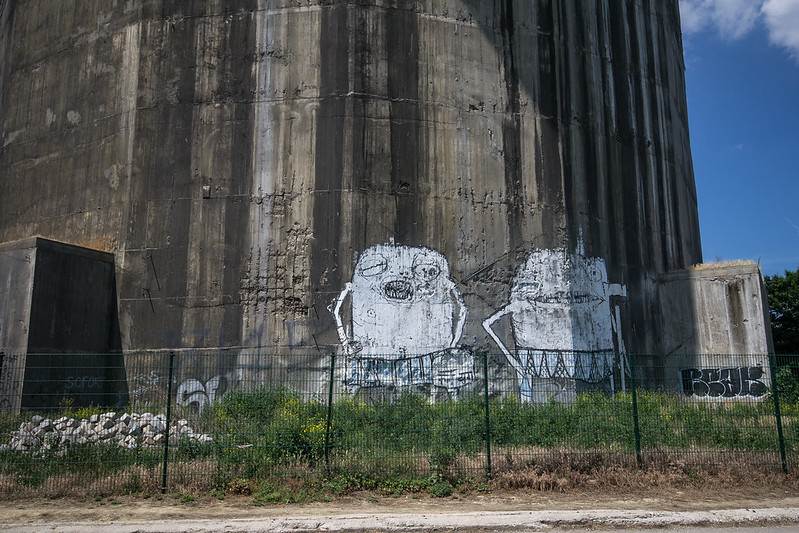 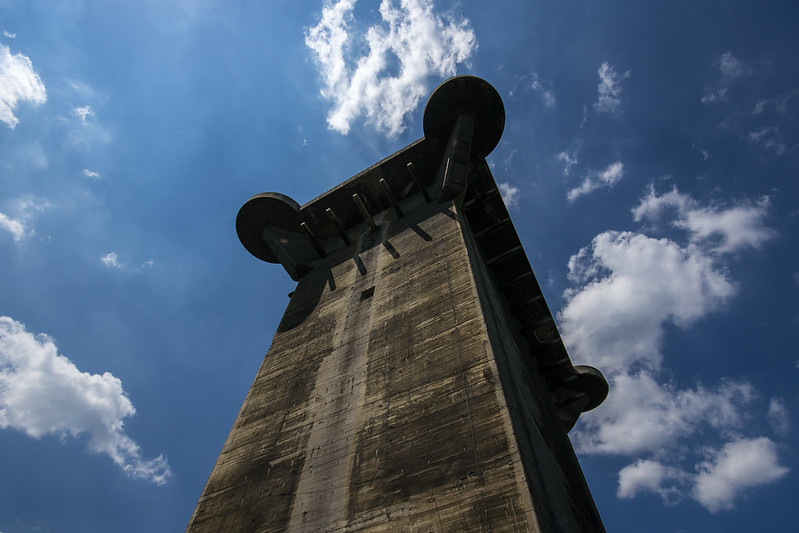 A Flak Tower in Augarten park

Keith and I wanted to check out some more random buildings so split from Jon who went off in search of record stores.

We needed to travel on the trams and the metro throughout the day and were told you could get tickets from some convenience stores so we bought some sort of travel cards, I think it was more expensive than getting it from a station but never mind. Also no one else seemed to have tickets or at least they were’t validating them but better to be safe than sorry I suppose. 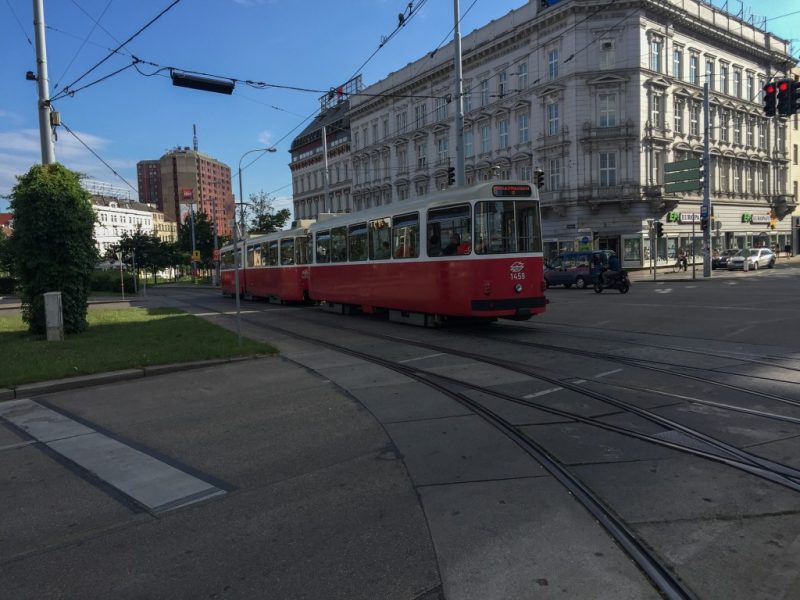 We headed for the financial district which has the tallest building in Vienna, DC Tower 1. Not the most exciting looking building but the reflection of the sky in the buildings glass was cool. 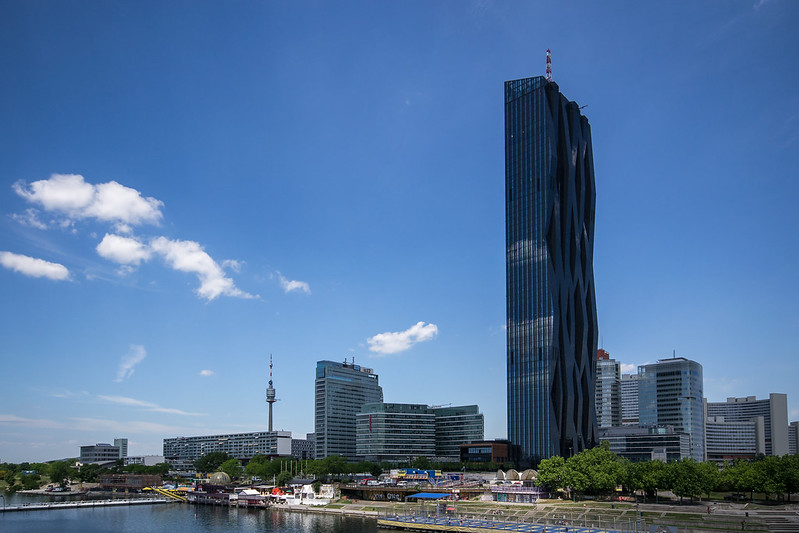 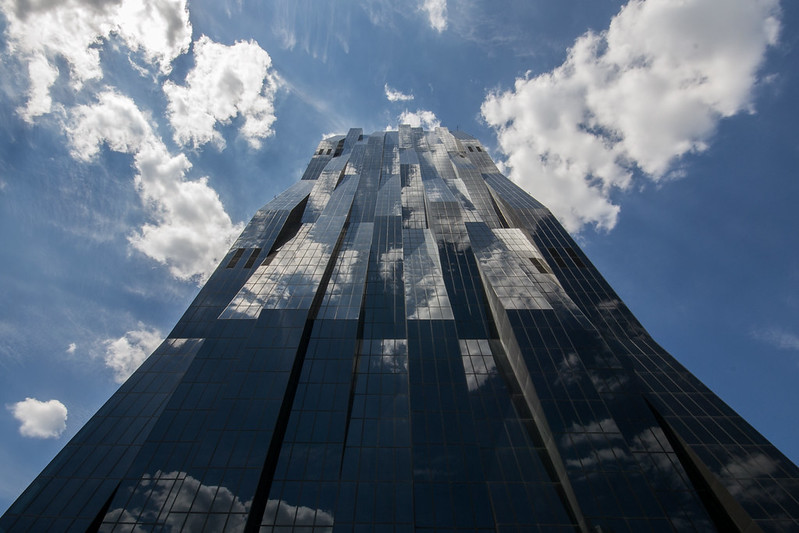 Next we headed to Hundertwasser House, a random looking and colourful house designed by Friedensreich Hundertwasser. Quite hard to photograph because its in a narrow street plus the sun was in totally the wrong place! 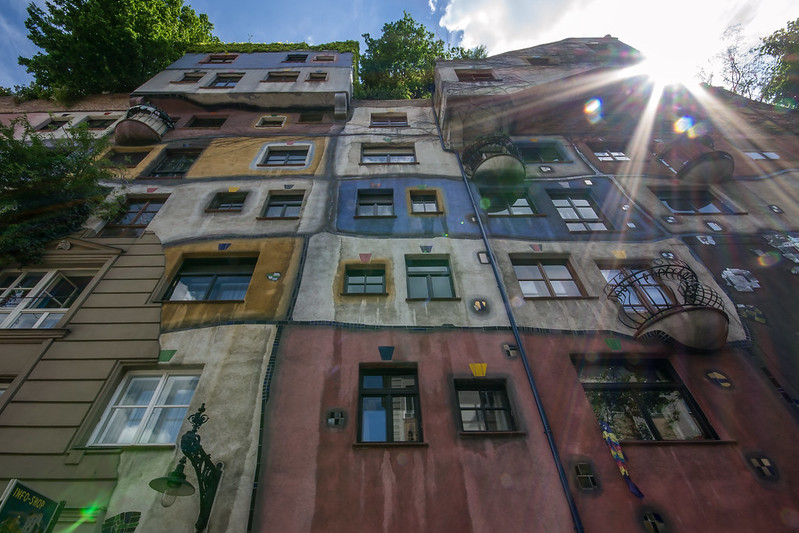 Opposite Hundertwasser House I finally found a small Austrian flag in a souvenir shop suitable for my bar! After this we made our way back towards the hotel with a stop off at the park next to Votive ChurchÂ for a short chill out and to catch some cheeky rays before meeting up with Jon. 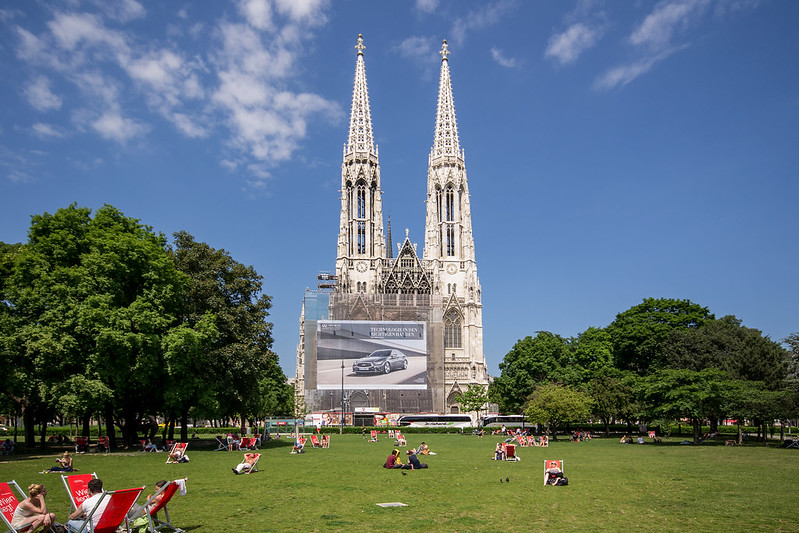 The hire car turned up on time, they even gave us a free upgrade as the car we booked wasn’t available. They also gave us a free guide book to Slovakia and the use of a sat nav for no extra cost. I would definitely recommend this hire company https://www.carone.sk facebook
Although we couldn’t complain as it was free; being a snob who is used to TomTom; I found the sat nav was awful, for some reason the view kept changing from 3D to 2D randomly as the most inconvenient times. It stressed me out.

I followed the sat nav and drove out of Austria and into Slovakia….. Next stop Bratislava….. 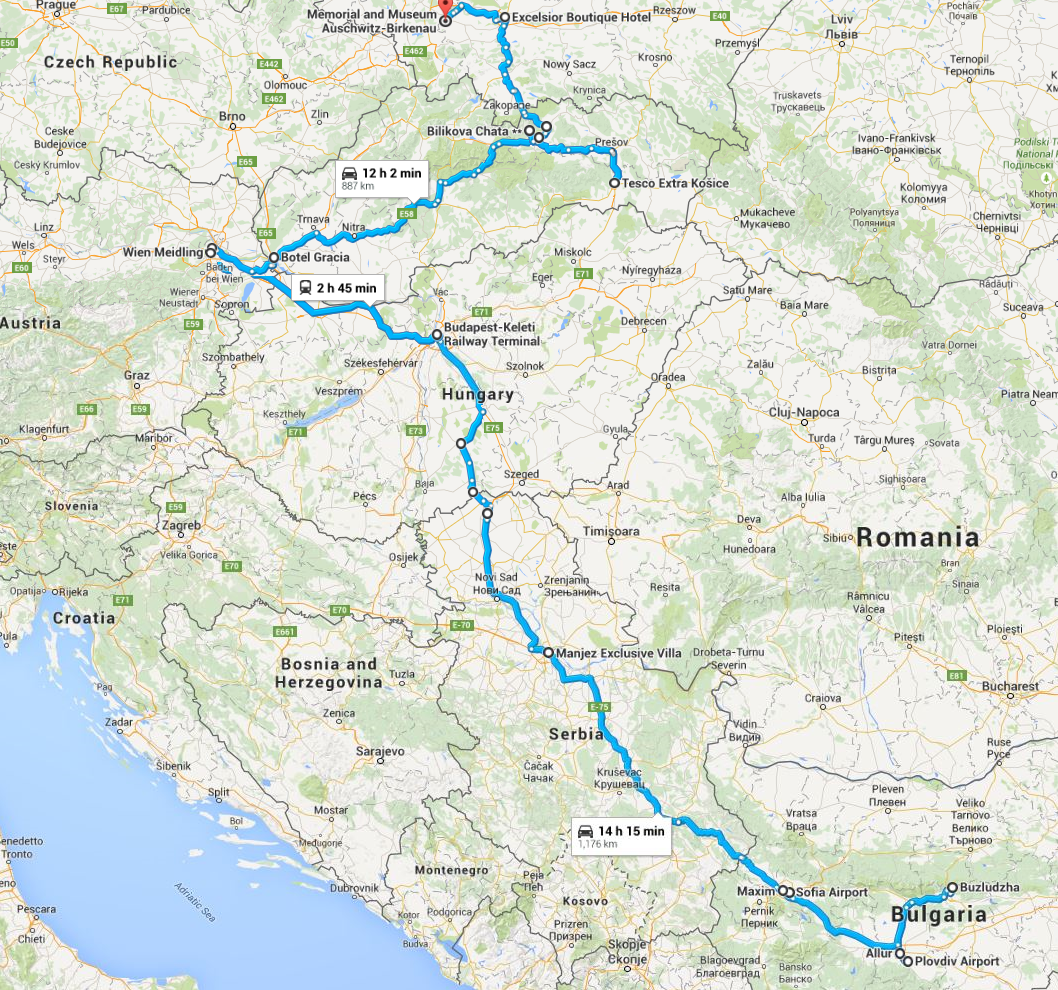