A trip to Chisinau, Tiraspol and Bucharest.

Today we would leave Moldova and travel to Romania.

Without doing much research, we’d booked a flight to Moldova and a flight back from Romania. The original plan was to find a way from Chisinau to Bucharest by road but it was a lot further than we had anticipated, it would have wasted a whole day, the train would have been cool too but that would have taken even longer. So before the trip we found there are flights between the two cities for under £100 each. There was a flight on the day we had planned to travel and at a reasonable time.

I contacted the apartment owner and said we would be ready to leave at 10am. She said to give the keys to the cleaner who would come round then.

We left the apartment and set off in the direction of the airport stopping off for a quick browse in Mall-Dova. In one of the clothes shops I found a t-shirt with a Russian word on it. I held Google translate up to it. I bought it.

There wasn’t anybody behind the Sixt desk so we thought we’d check the cases in first. As soon as we had started walking away we spotted a Sixt man walking back to the desk. I gave the keys back, waited for them to inspect the car then signed some paperwork.

After checking the cases in, we went through security in to the departure lounge.

I tried to find something to spend my remaining currency on in the duty free shop.  Ash had lots of money left. We looked for somewhere to change his money but there wasn’t anywhere. Outside of the country the money would be useless. Time was running out the plane was nearly ready to board.

The only solution would be for him to buy cigarettes. He did but still had lots of currency left. We had run out of time and had to board the plane.

It was probably the smallest plane I’ve ever been on; it was also my first time on a prop plane.

Above are a few clips from my Instagram stories throughout the trip.

The flight was only around an hour long, just enough time to be given a roll, a Milka chocolate bar and a small glass of whatever drink we wanted. I changed my sim card back to EE ready for the EU roaming.

The weather forecast was for storms. It was raining when we landed. In the terminal we waited by the luggage reclaim for our cases.

Once we were reunited with our damp cases I booked an Uber.

The Uber man messaged me in Romanian and I messaged back in English. We were trying to work out where he was waiting for us. Eventually we located him and were on the way to our next apartment in Bucharest.

The apartment was bang in the centre of the old town. It seemed like the perfect location but later I would be cursing it.

It was another apartment block; the lift in this one had a manual metal outer door and wooden saloon doors inside. It was a bit of a squeeze especially as the doors opened inwards.

The apartment seemed nice. We had a room each, all a decent size. Keith had a balcony with a nice view of the river. 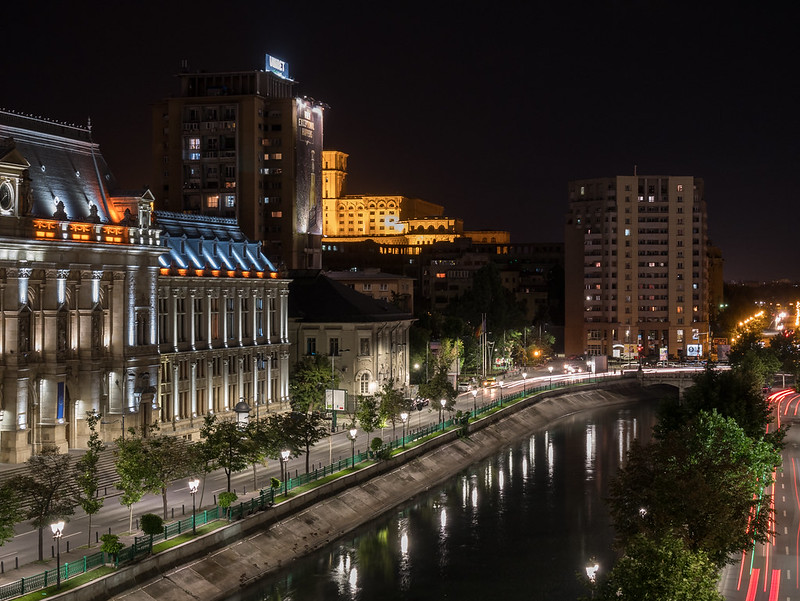 The rain had eased off so we went for a little explore, mainly to locate a cash machine. There were a few strange street performances.

It was getting late so we decided to go out for a meal, with the help of trip advisor we found a couple of options. We ate at Bazaar, I had fish and chips.

The only thing I had plotted on the map was the Nation’s Heroes Memorial, a large monument in a park. We headed towards it, passing the Unirii Square fountain and enormous parliament building en route.

A stage was being dismantled which was partially blocking the view of the monument. 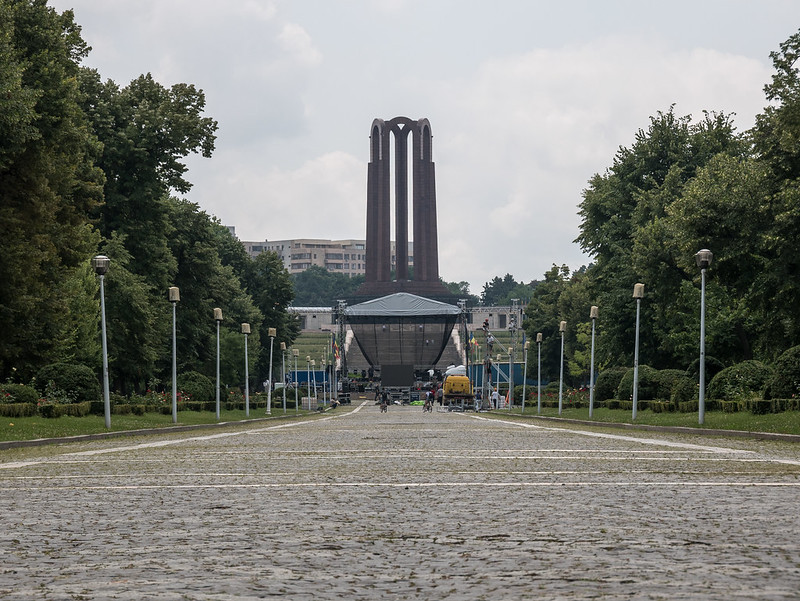 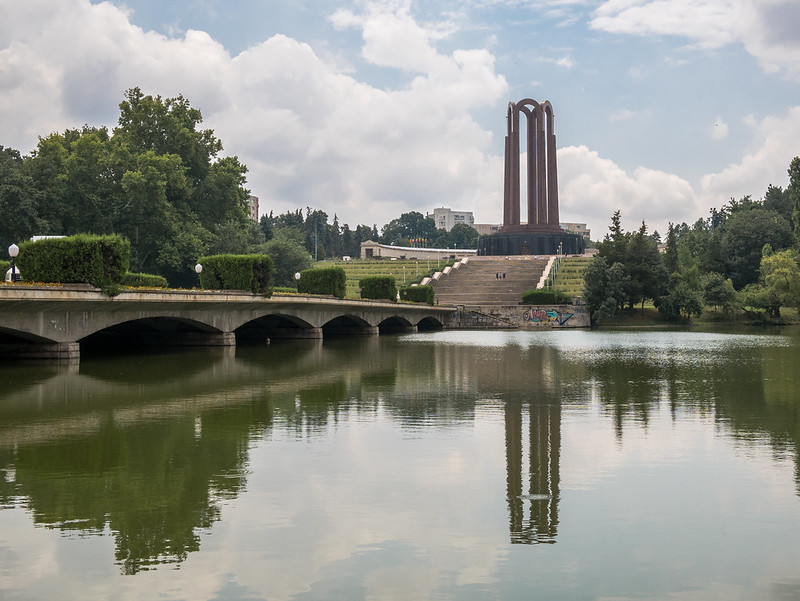 We walked right of the stage to the edge of the lake and saw some splashing. There were loads of little turtles swimming about and floating on bits of wood. 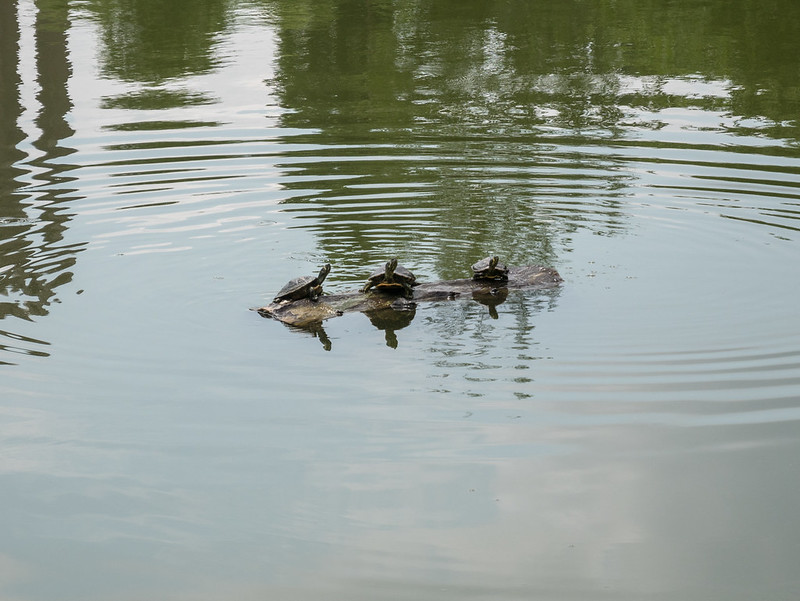 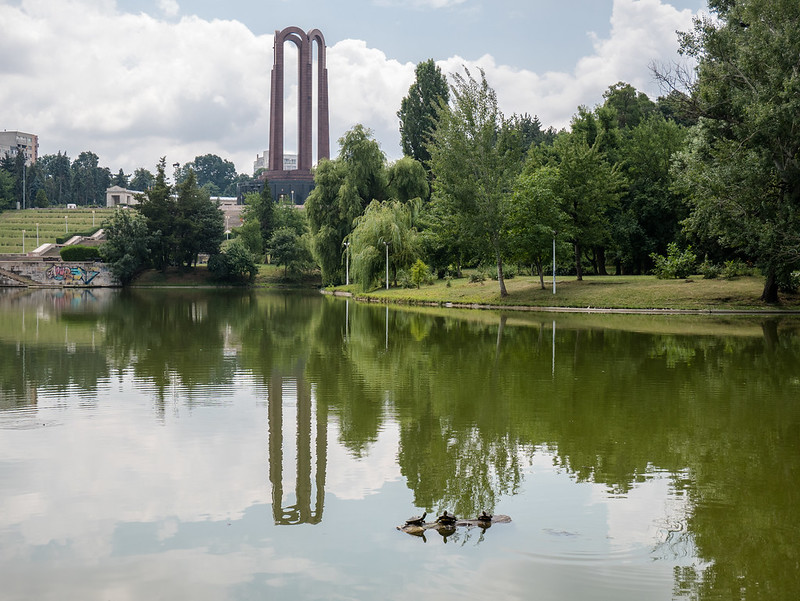 We started to walk a bit further round, Keith took the lead. He thought he’d brushed passed some stinging nettles but looked round and there was a massive hornet on the bush, he’d been stung.

Also in the park was a very sad looking cat. 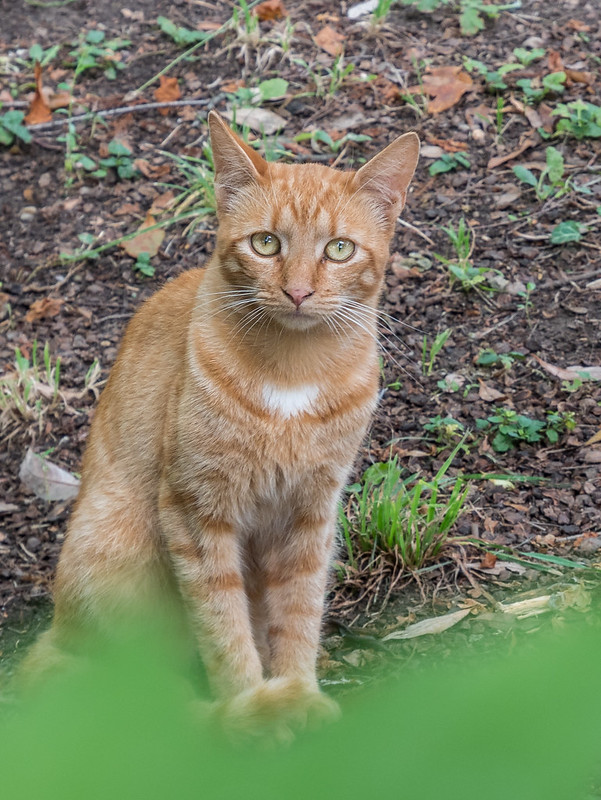 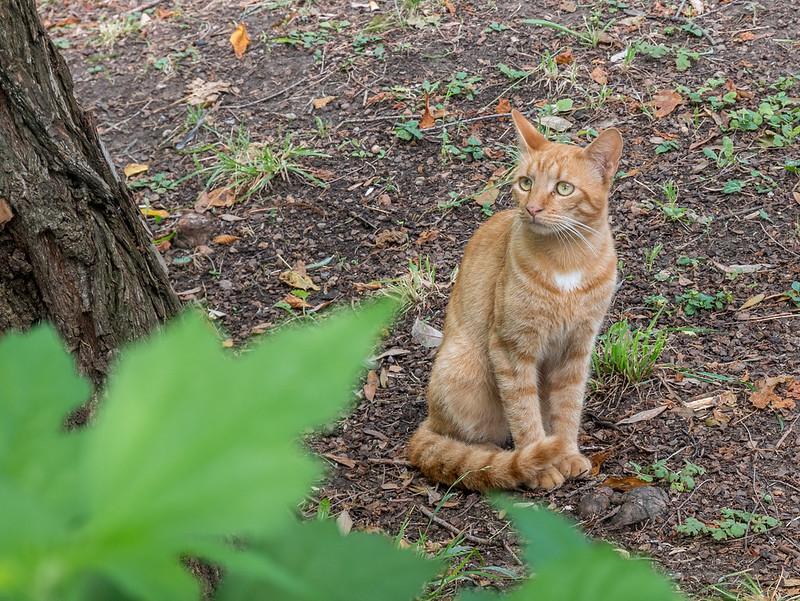 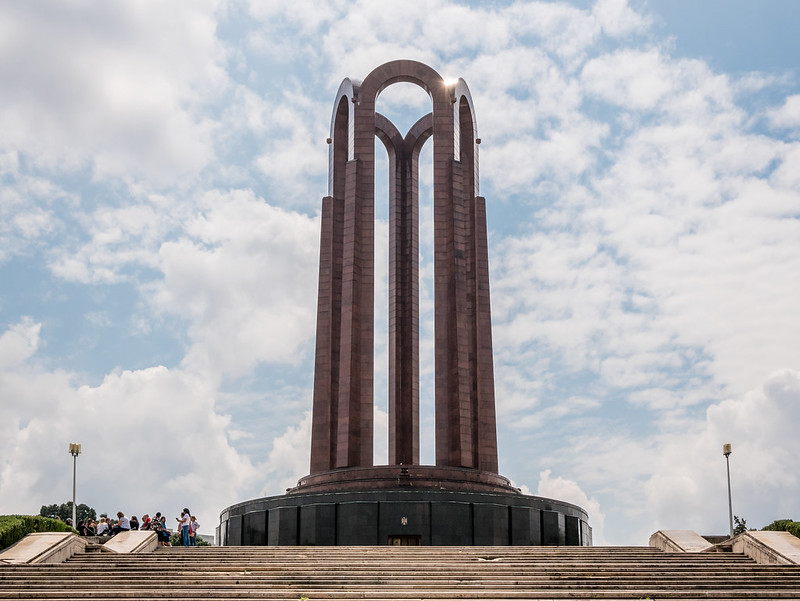 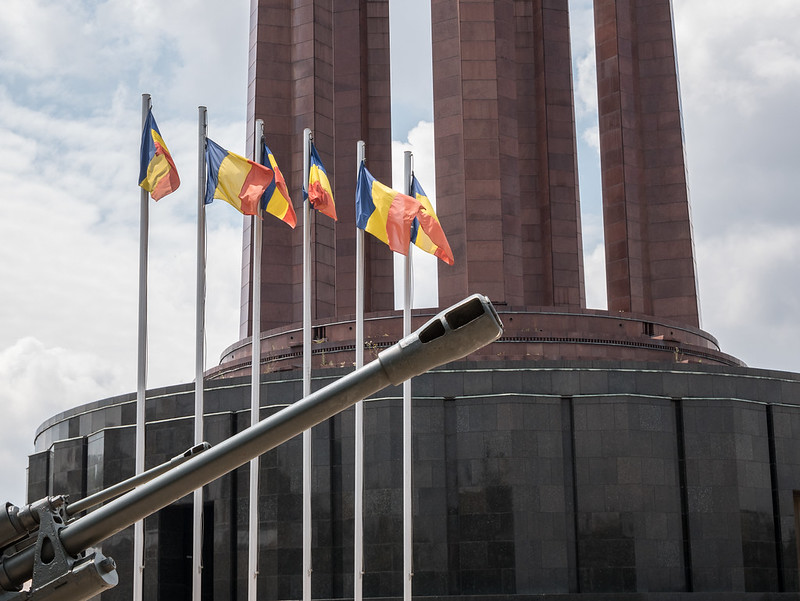 Bucharest has electric micro scooters for hire everywhere, after watching them everywhere in Tel Aviv last year I had to have a go. Ash didn’t fancy it so Keith and I downloaded the Lime app, registered and found some scooters. They are so much fun, in the cycle lane I managed to get up to 27kmph.

We went exploring, heading for some of Bucharest’s street art.

We soon got bored of that and concentrated more on the scooting so headed to a couple of parks.

For our evening meal we went to a restaurant called Aubergine which served Middle Eastern cuisine. It was good, the dessert was nice if a little small.

We wanted to have a bit of a night out but we weren’t too sold on what was on offer near our apartment in the old town. The place was like a beach resort, set up for tourists with restaurants and tacky overpriced bars everywhere just without the beach.

The first bar we went to had table service, yay. Keith and I got shisha, it wasn’t very good.

It was already feeling like a forced night out, and we were almost falling out, I didn’t want to go to shit bars like that all night but there wasn’t much else on offer. Finally we went into a shot bar which was quite cool, it had bar service for starters but after a couple of shots it’s a bit pointless.

Next we went into a bar that was so loud it was ridiculous and the prices were what you expect to pay in London! We noticed they were giving free drinks to girls.

We were done with it and called it night. I was expecting something better than this. Maybe we weren’t in the right area but I’d avoid the old town at all costs.

I slept terribly, partly due to the thumping music I could hear in my room coming from the old town until about 6am!

We had no real plans; there was nothing we really wanted to see so we decided to use the metro system and head to a shopping mall. It would end up being a day of malls.

On the way to the closest metro station we passed the Tehno Import building, Keith and I thought it looked cool. We thought it was brutalist but it predates brutalism being built in 1935 and apparently is an example of cylindrical form in modernism.

After purchasing tickets from the machine we made our way to the platform and got on a train. We alighted at Aurel Vlaicu Station and headed for the first mall –  Promenada Mall.

Really it was a bit early for lunch but we were hungry so scouted out the food court which had a good variety of food outlets. I decided to try Taksim – flavours of Istanbul and ordered a Veggie Falafel Box.

I looked on the map for somewhere else we could go and found a market. Obor Market has indoor and outdoor stalls selling a variety of different things. It was nice to see but we weren’t really looking to buy anything. All I got was a lemonade from a stall, I seem to remember it not being as nice as I’d hoped.

At the end of the market we spotted another mall. Mall 2 – Veranda Mall.

After a quick wander round; Ash decided he wanted to go to Pull and Bear; there wasn’t one at Veranda but there were a few stores on the map. I can’t quite remember why but we decided to try and beat the time google said it would take.

To get to ParkLake Shopping Center we had to get the M1 metro from Obor to Dristor.

Waiting for the metro slowed the journey down.

At Dristor station we had to guess which exit was would be on the route and then made our way in the direction of the mall. There were only a few minutes left. We passed another exit from the metro; it would have shortened our journey if we’d picked the right one.

We were close to the mall now but google maps was playing silly buggers so we ended up walking too far the wrong way, we soon worked out the way and started jogging through a park. We entered Pull and Bear 1 minute late.

The toilets in the mall were really cool. Everything was upside down, with sinks and toilets mounted to the ceiling, it made for some quite funny photos.

In the park there were swan boats sailing around the lake.

Later on we ventured back in to the old town and walked the streets looking for an Italian restaurant called Il Peccato, following the map on Keith’s phone, we ended up in the wrong place but eventually found it and it was really close to our apartment.

Ash isn’t the biggest fan of pizza and hated his, Keith and I tucked in. After the meal we went on dessert hunt. There only seemed to be one place in the old town and it had a big queue so we pretty much gave up. Keith got something from KFC.

After some googling Ash found a highly rated dessert café which was open to midnight a short walk away. I suggested grabbing the cameras to get some night shots of the fountain at the same time.

The café was called Zoomserie and the cakes were really good. The fountain was lit up so made for some pretty cool photos.

I got up and went for a run. I worked out that if I ran to the Nation’s Heroes Memorial and back it would be about 5K. It was getting pretty warm already. I ran up the steps until I was at the top with the monument in front of me, I have to take a quick break. There were a number of other people in the parking running and jogging.

Back at the apartment we finished packing and left. After a souvenir shop and a snack from a bakery we headed for the park next to the fountain to see out the last couple of hours before having to book a taxi to get to the airport.

It was the hottest day yet. The fountain suddenly kicked in to life with the water jets going to music, it was pretty impressive and the spray coming off it was refreshing in the heat.

We moved to a side street where I summoned an Uber which took us to the airport.

Ash still had quite a bit of currency again but this time managed to find a change kiosk before we went through security.

The airport food prices we very steep but we ate because it would be a long time before we’d have another opportunity.

Ryan Air had allocated us random seats, Keith was in front of me and Ash was a bit further back. The cabin crew started to close the doors. I nudged Keith; he said surely there must be another bus load of people. There wasn’t, each of us had 3 seats to ourselves! The flight was pretty smooth and took about 3 hours.

I wasn’t that impressed with Bucharest and would like to go back to Romania and see somewhere a bit more authentic.