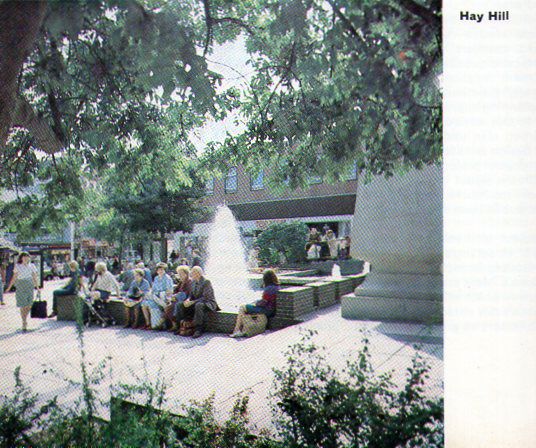 Can’t remember why but for some reason recently (2012) I thought about the old water fountains that used to be outside C&A (now Next) by the statue of Thomas Browne at the Haymarket/ Hay Hill in Norwich. I remember them being more full of rubbish than water!

Lots of people I talked to didn’t remember them so I started to think I’d imagined them as would have been pretty young at the time.

I browsed the net trying to find photos but all there seemed to be were before the fountains (where there was a grassy area around the statue) and photos of the area now. Couldn’t even find any photos of C&A!

After speaking to more people I realised they did exist!!

So with the help of some friends, family and some old books we tracked a few images down!

Lets start with the Statue of Sir Thomas Browne. It was unveiled on the 19th October 1905.

Ceremony of the unveiling of the Sir Thomas Browne statue on Hay Hill by Lord Avebury on 19 October 1905. This event marked the tercentenary of Sir Thomas’s birth in 1605. He was one of Norfolk’s foremost writers and scholars in his day. An accomplished physician he wrote a classic analysis and defence of his profession in Religio Medici and contemplated the ancient cremations found in the county in Hydriotaphia or Urne-Buriall. Knighted by King Charles II at St Andrew’s Hall, he died in 1682 and was buried in the nearby St Peter Mancroft Church.

The buildings in the centre of the market including the White Horse P.H. were demolished and a rather attractive green created around Sir Thomas Brown’s statue erected in 1905. Alderman Riseborough’s School for Poor Boys occupied by Page & Sons (now Page Brothers) was later occupied by Lamberts.

Hay Hill pictured in the late 1960s. This area was once a market trading area for hay and fodder. By the end of the nineteenth century it was occupied by a number of pubs. On the left can be seen the survivor, the St George & Dragon: next door but one was the Golden Pipe and right in the centre, where the statue is seen, was the White Horse. At the turn of the century this area was cleared as part of slum removal and installation of the new tram network. Where the old White Horse stood a park was set up and opened m 1905 with a statue in honour of Norwich’s philosopher-physician, Sir Thomas Browne. Since this photo was taken the old brick Lamberts building behind the statue has been demolished to make way for a modern clothes shop and the little park cleared away to make way for concrete slabs. Apart from St Peter Mancroft Church and the statue just about everything else seen here has changed-I wonder what Sir Thomas would make of it all!

This Norwich guide book was not a fan of the 1970s refurbishment!

Hay Hill is the sloping piece of where land in the Haymarket- where the statue of Sir Thomas Browne is. As this name refers only to the two sides of the square (the top is Church Street and the bottom is the Haymarket) there is only one the building with this address “George and Dragon’. Shortly after the first edition of this book appeared, the area was totally mutilated by the City Planning Department who chopped down the trees, dug up the area of green and moved the statue. An attractive oasis of grass and trees was replaced by concrete slabs and a fountain (of sorts) which has been a source of embarrassment to all concerned ever since. The Hay Hill ‘scheme’ (if such a crackpot idea can merit the word), and the events leading up to it are a dreadful example of what happens when cities fail to keep a tight rein on their planning departments.

Below are some photos I have found of the fountain.

This is a busy city-centre pub with a thriving morning, lunchtime, and evening trade. It undoubtedly owes its present success to the Knight family who run this and two other pubs in Norwich. In the three years that they have been here, they have built up a large following especially among the younger generation. Of course, the central position of this pub helps. It stands on Hay Hill with the market a few yards away and is surrounded by the city’s leading shops. Hay Hill itself has been substantially altered recently and converted into a small public square giving the George and Dragon a more attractive setting. The inside of the pub is attractive and comfortable and at the week-ends usually crowded. A major daytime attraction is the food provided by Paul Knight, the landlord’s son. A variety of snacks are available as are excellent lunches.

The photo below is from Archant, to see the full size photo you have to buy it. Link below.

Recently (2013) the fountain has been talked about on a group about Norwich from the 1960s, mainly about memories of when people put fairy liquid or some sort of soap in it causing foam to overflow and cover the streets! Would love to see pictures of it if anyone has any!! Anyway here are a few of the comments/ memories taken from the people of facebook.

Apparently local pranksters used to tip soap powder or fairy liquid in it so it was a pretty common sight to see the fountain full of foam.

Wind in the Willows fountain

There was another water feature in the Haymarket, it is still there but no longer functions. The Wind in the Willows fountain is on corner of brick plinth in front of Topshop, behind the hot dog stall.

Not gonna steal photos from flickr so will put one on when I get round to taking one.

The area in front of the statue is now home to ‘Homage to Thomas Browne’ which includes sculptures of a brain, an eye and some seats and benches.

An EDP article from August 2015 has some ore photos of the fountain and area.