We checked out of the apartment and made the fairly short drive to the Italian coastal resort of Rimini stopping on the way to get a photo of San Marino from a distance.

This was the smallest apartment we had booked, the only one where we had to sleep in the same room. I was hoping to be drunk enough to sleep through Keith’s snoring!

Although we thought we had booked somewhere close to the centre, we hadn’t! it was a bit of a walk. To start with we walked down a dead end which made the walk even longer. It was ok though as we had Pokemon eggs to hatch!

One of the Pokestops in a park near the apartment looked cool, it was a giant camera. We couldn’t see it anywhere! Keith googled it and found it was in a totally different place! We headed towards it. 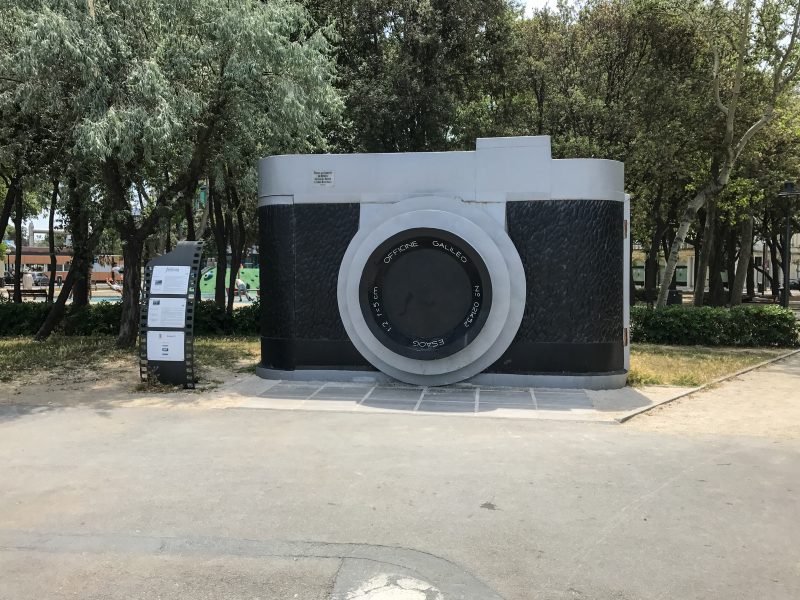 Squinting and trying to take a photo. #rimini #giantcamera #sunny

I believe it used to be a camera shop. http://www.visit-rimini.com/photos/the-giant-camera-fellini-grand-hotel/

After a quick snack at McDonald’s we headed for the beach. 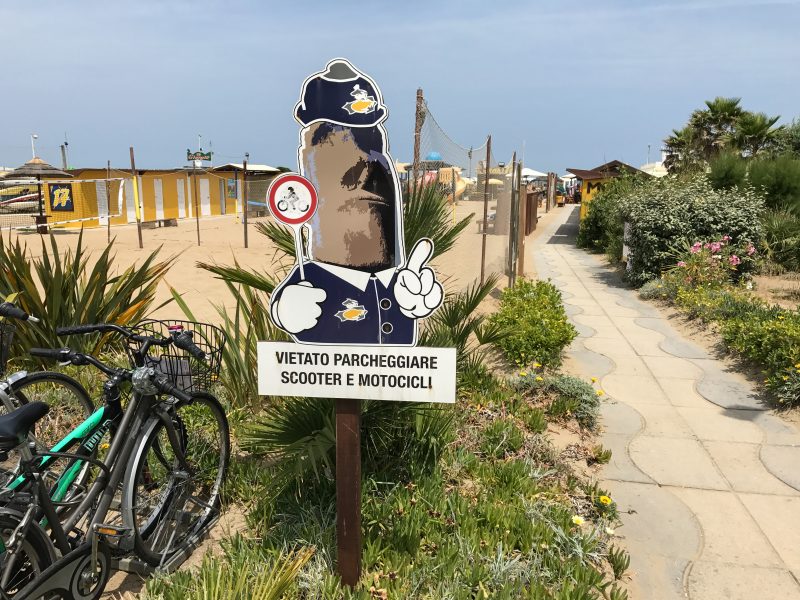 We had been sitting on the beach for 10 minutes before a man came over and told us we couldn’t sit there! We had to pay for a sunbed. We had never encountered this before so we pretty annoyed. After a quick google we realised it was just how things work in Italy, beaches are privately owned.

We headed for the public beach..

I went in the sea, forgot to take my fitbit off and it stopped working!!

After a nice spell on the beach we headed back to the apartment. Keith had a huge patch of sunburn on his back, he must have accidentally missed it with his lotion, it looked painful.

After showering off the sand we headed for the old town. 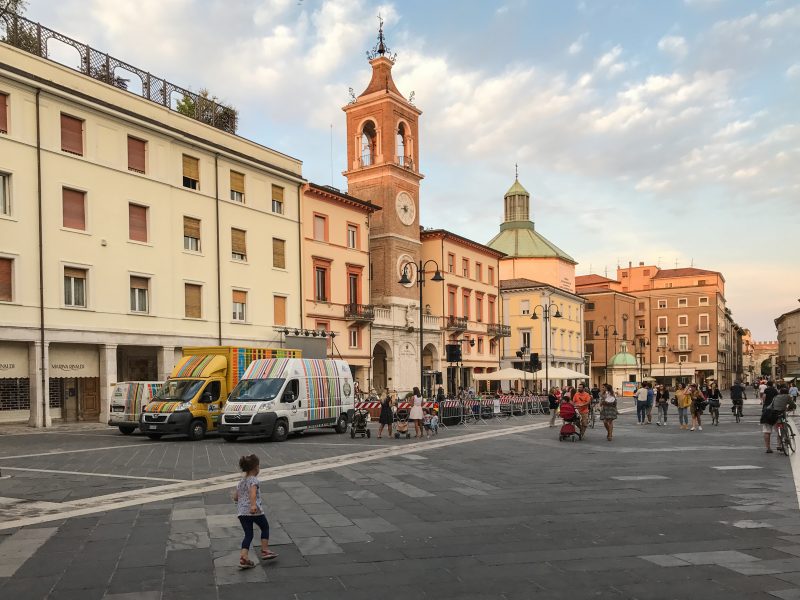 We eventually got some food after wandering round for ages.

We went in search of bars. We walked for ages along the main strip of restaurants and shops. None of the bars really took our fancy, they were not exactly ‘happening’. Thinking that when we eventually did find somewhere it would be really expensive we bought miniature vodka bottles from a couple of shops for the walk!

One shop had miniature bottles with pictures of fascist dictators on the bottles, many Hitler and Mussolini It was a bit strange. 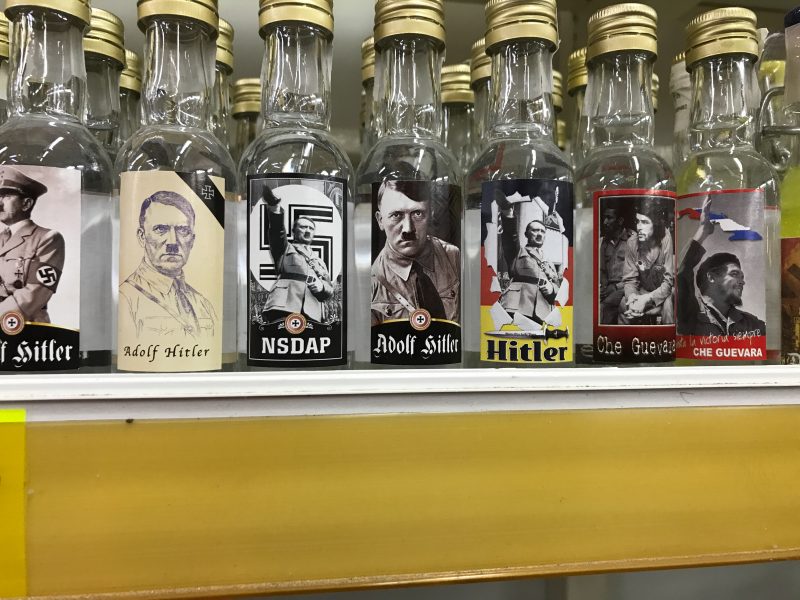 We stopped at small bar for a quick drink and toilet stop, typical European style with table service, gave us bowl of crisps which was cool.

We continued our walk and didn’t really find much so walked back along another street, we came across a lively bar, Keith was desperate for the toilet so we thought we would check it out – there was only one toilet for the whole place with a large queue! We moved on!

Keith tried to go for a pee in a dark corner on the other side of the road but someone started walking towards him with a torch!!!!!!

After having a drink in another bar we decided to call it a night, the nightlife didn’t seem that good and the lack of toilets was a nightmare. We got ice creams and walked back to the apartment.

The 2.5 hour drive to Marghera went smoothly. When we we booking accommodation, we found that staying in Venice was very expensive plus has no parking. After lots of searching we found Camping Village Jolly it looked like a holiday camp, it was close enough to a railway station where we could get the train to Venice and it was only £58 for a twin room for two nights!

The was room tiny! We checked booking.com but the rooms we now double the price. Keith went and enquired and they did us a deal so we got another apartment for €75. So now we had our own apartments which was still cheaper than staying in Venice!

The other bonus was the shuttle bus they offered – a return ticket to Venice was €5, this meant no hassle trying to get to the railway station.

We spent the rest of the day by the pool. In the early evening we went for a walk to try and find a shopping mall which looked very close on the map. It was still really hot, although on the map the mall was very close there was no way to get over the dual carriageway.

The mall was basically a big supermarket, there was another mall further up the road but Keith felt too hungover to go any further so we went back.

The food in on site restaurant was really good.

After a little rest and freshen up we went to the bar it was pretty dead. There were lots of mosquitoes! I’m not a fan of his music but the ‘Ed Sheeran’ cocktails were nice.

We got up early in an attempt to book our preferred bus time of 10.10am, it was fully booked so booked the next one at 10.40. We had no idea how long we’d want in Venice and had to give them a time for the return journey. We decided on 19.30.

After a chocolate croissant and and a espresso it was time to board the bus.
Within 10 minutes we were in Venice! After pinning the bus stop on google maps we headed towards the city.

I had the map we were given when we checked in to Jolly. I thought we could try and visit all the sights. On closer inspection the map just showed churches as the points of interest so we opted for the suck it and see approach and just walked, trying to take in a bit of every area and picking the favourite tourist attractions from google.

Through the railings #venice

It’s a busy place, so many tourists. The cheapest gondola ride was €80! We didn’t bother! 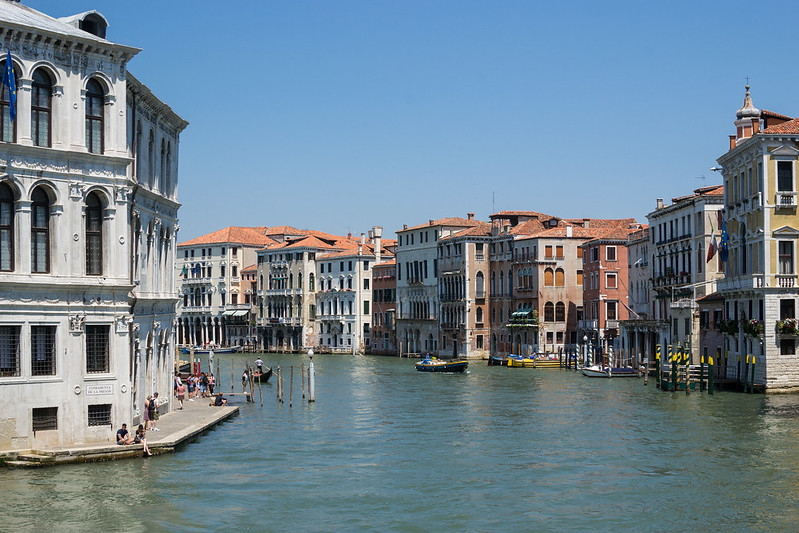 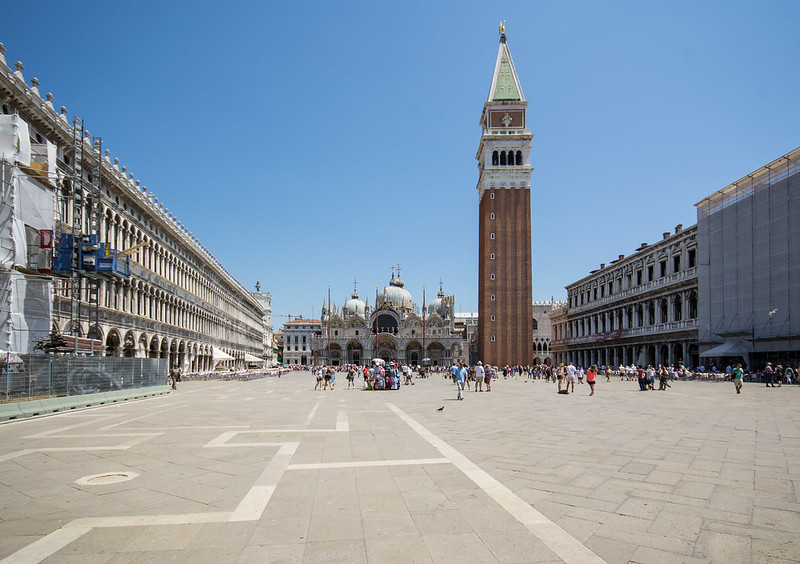 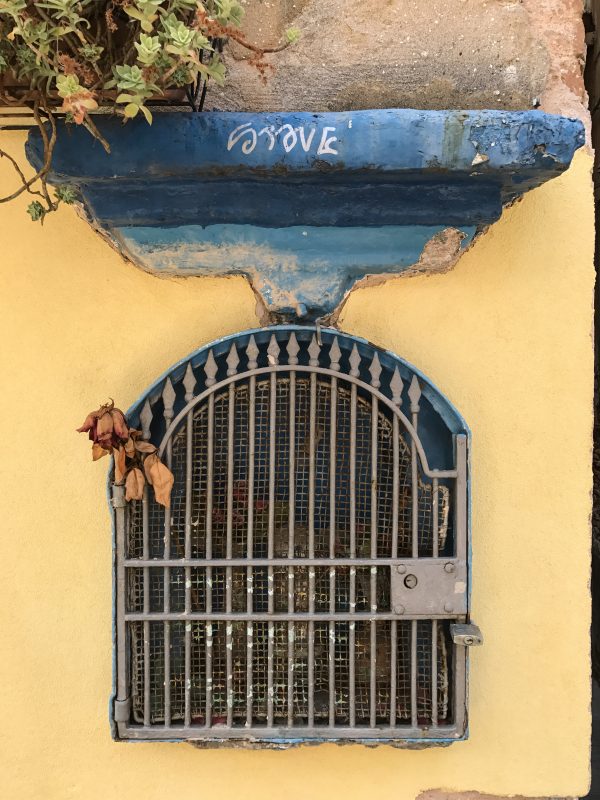 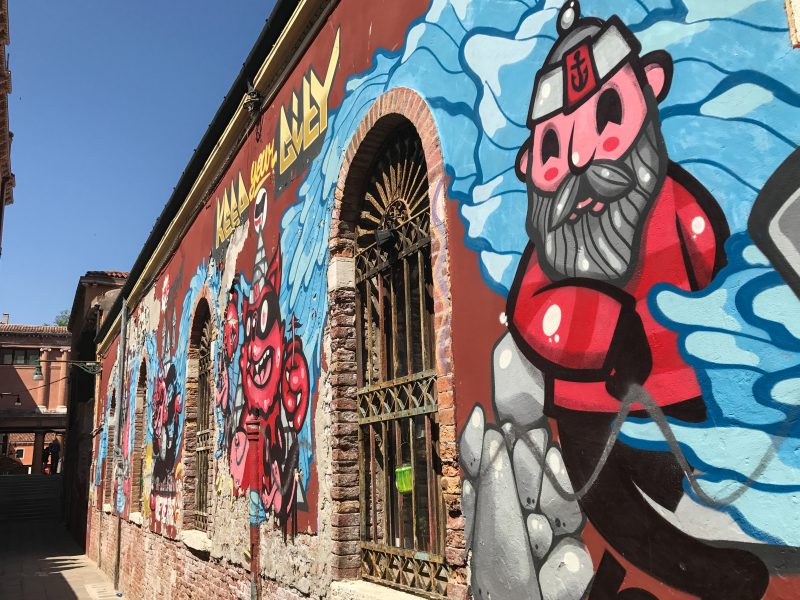 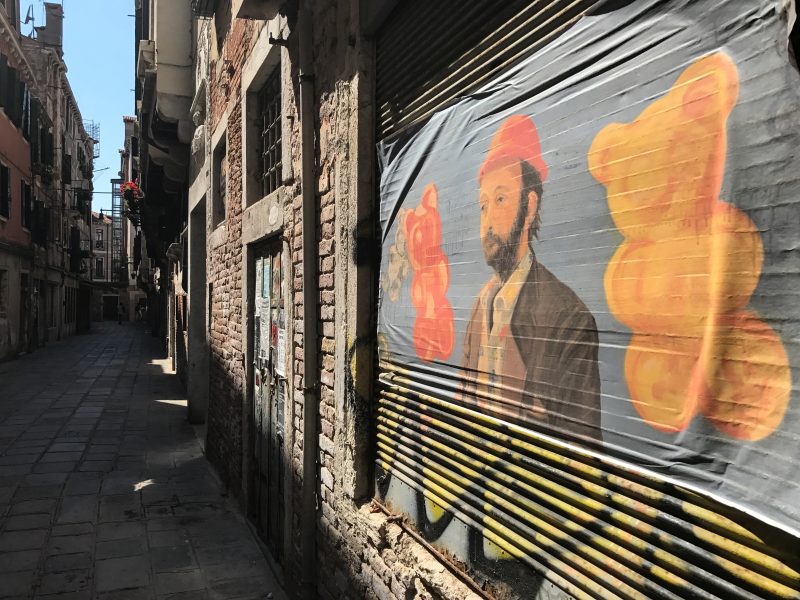 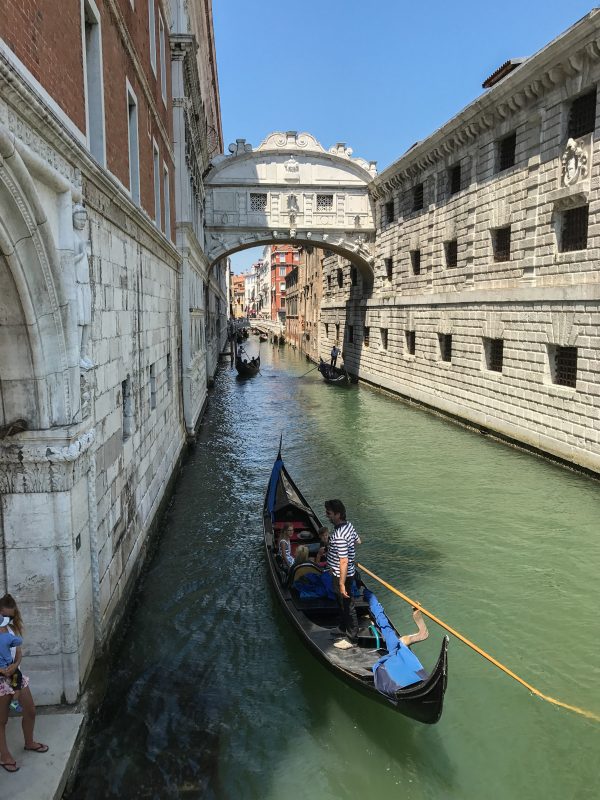 We found a park full of sculptures, one area was a swimming theme and other was random which included a huge shiny rhino!

There are so many bridges! After a while they all started to look the same. This satisfied us to the point that we’d seen enough.

We almost missed the bus, there was a bus at the stop bus it had ‘airport transfers’ written over the sides, we assumed it wasn’t ours. Keith thought he’d just ask to be on the safe side and it was a good job he did because it was our bus!!

After freshening up we got some food in the on site restaurant followed but a couple of ‘Ed Sheeran’s’ in the bar.

It was Monday night and the campsite was busier, lots of people outside my room drinking on the bench.

We got a fairly early night because of check out and the drive in morning. 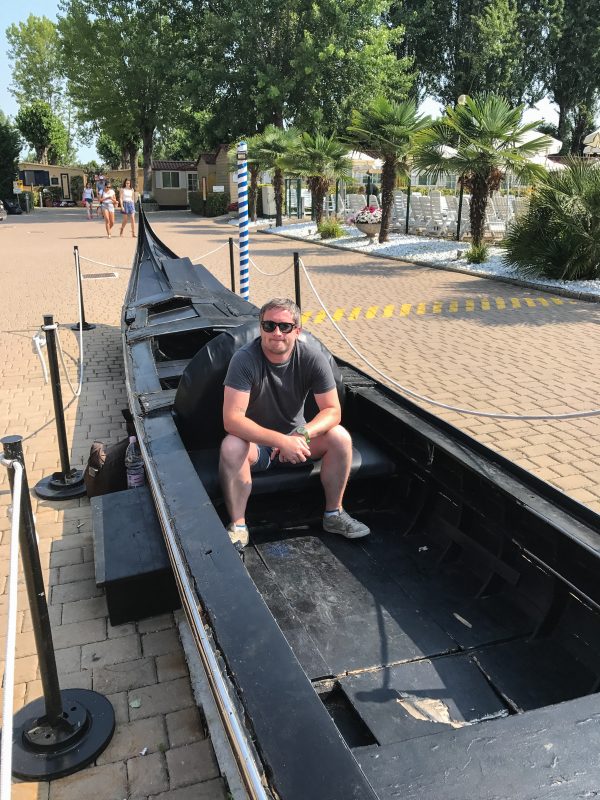 Keith, myself and another friend Rusty went to Rome for a few days in March. We checked out the usual touristy stuff, we went to Vatican City etc but the best thing (for me and Keith, not so much for Rusty!) was our excursion to Casa Sperimentale in coastal town of Fregene. Built in the late 1960’s by architect Guiseppe Perugini it has apparently been derelict since his death in the 1990’s. 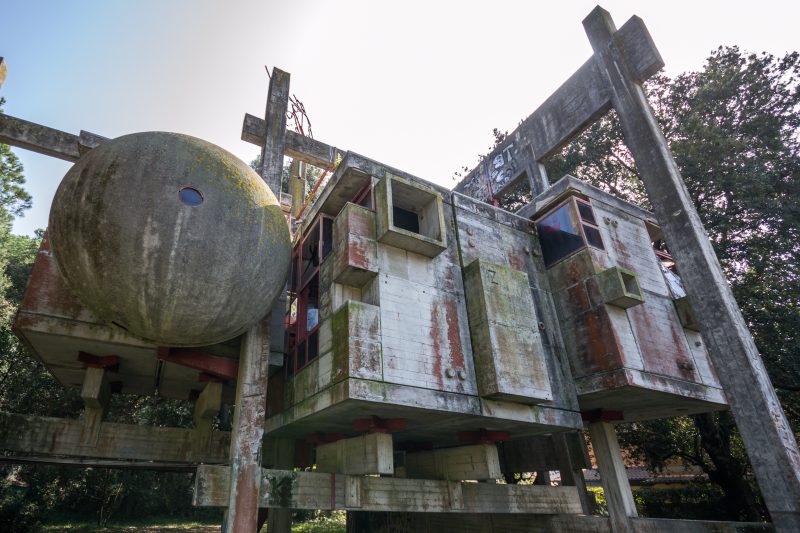 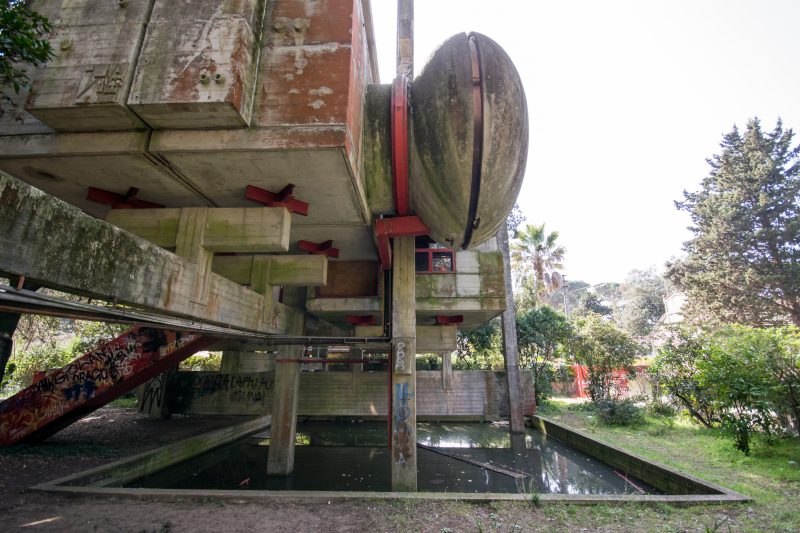 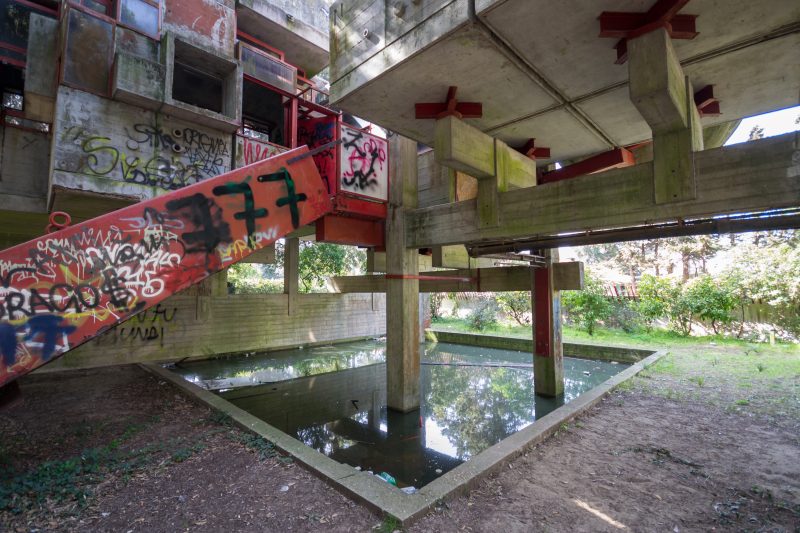 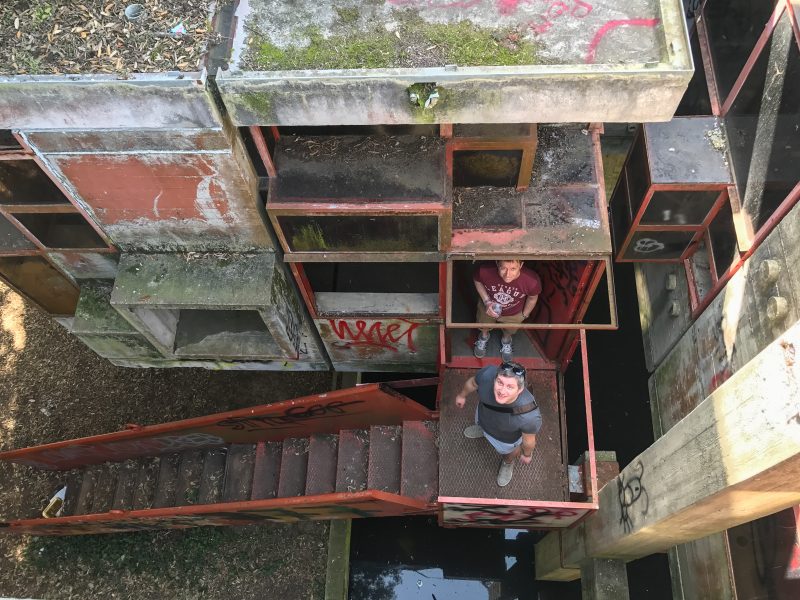 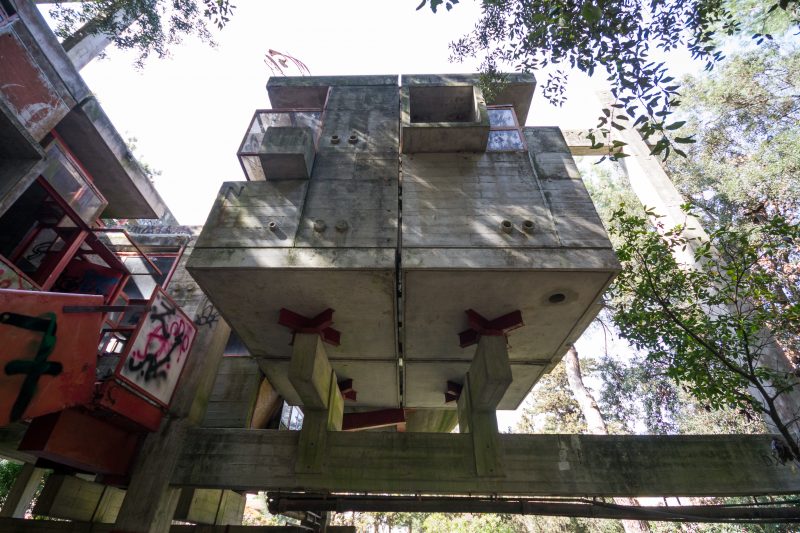 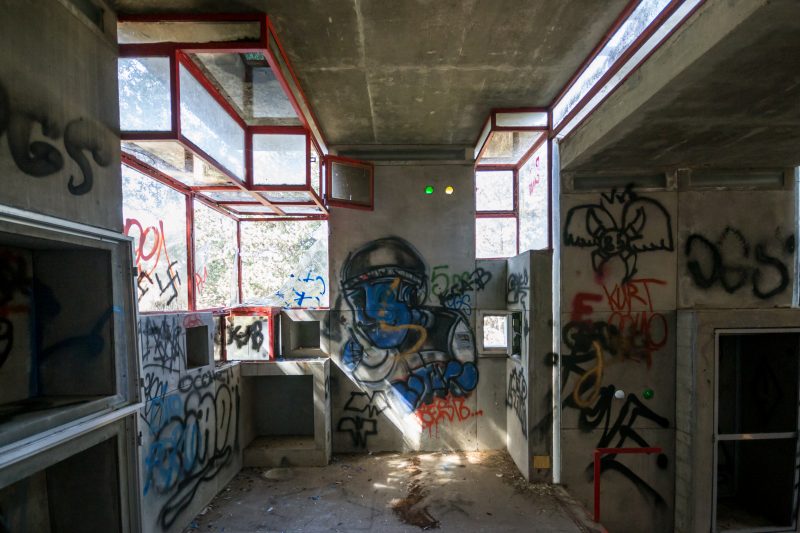 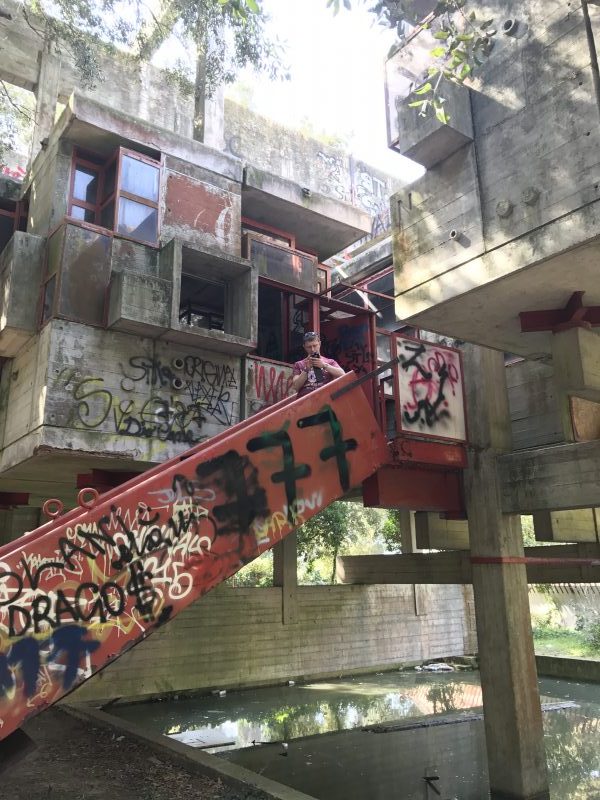 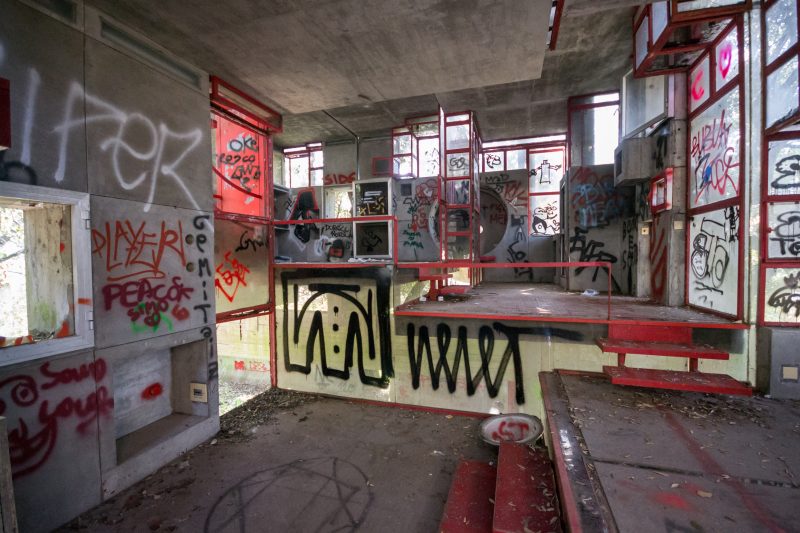 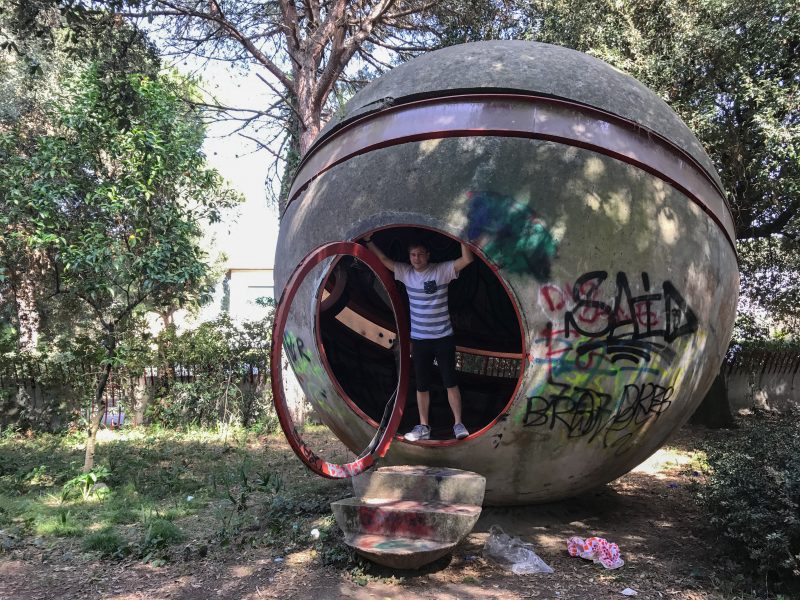 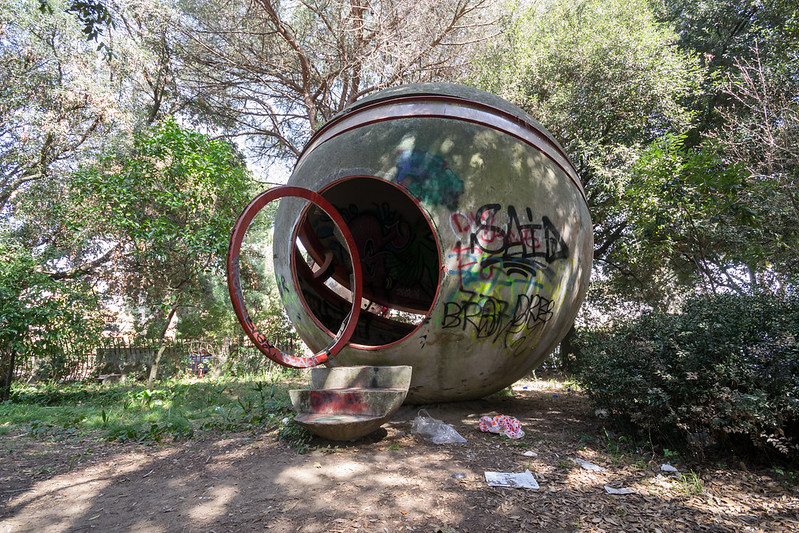 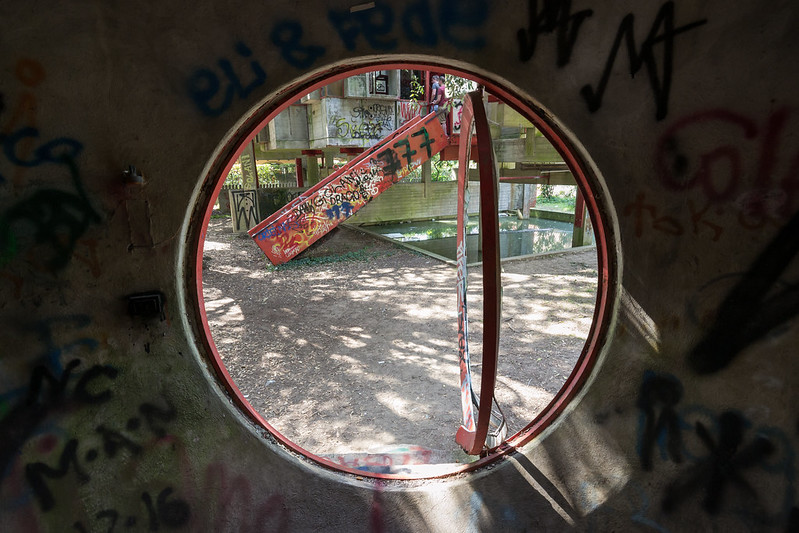 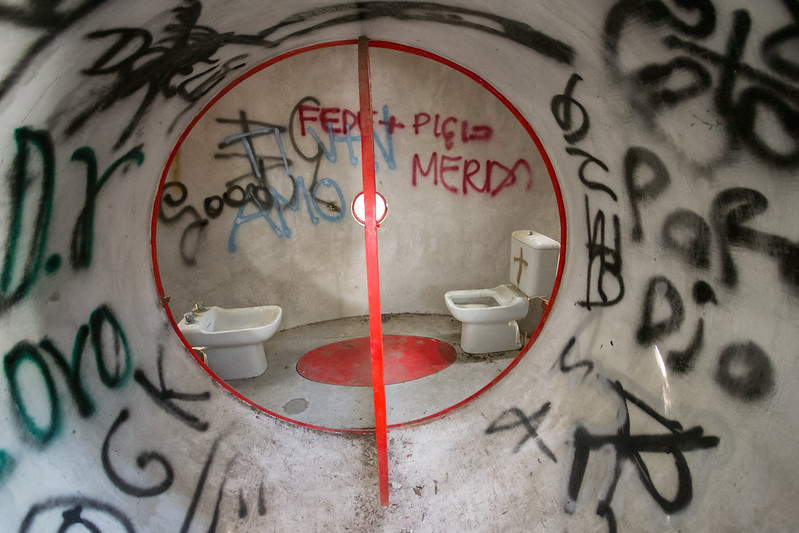 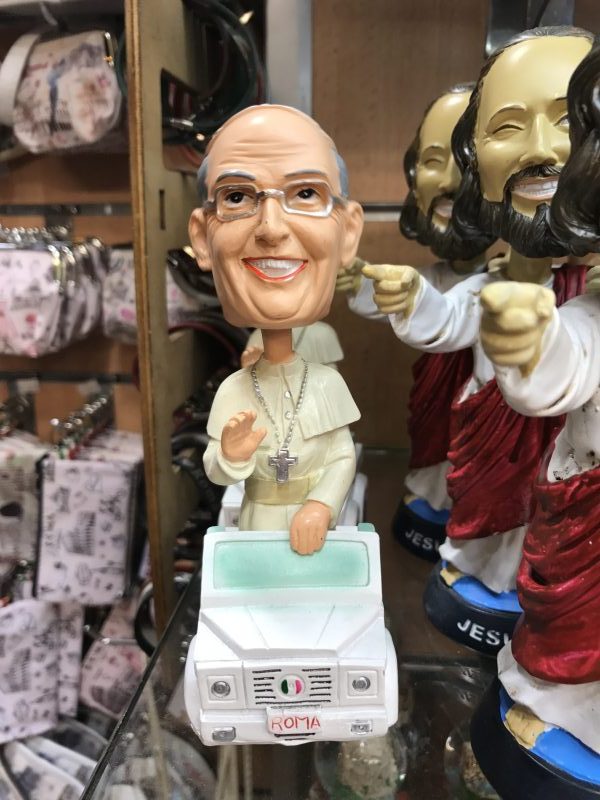