We were up, packed and out by 10am. Ready to leave Ljubljana and drive to San Marino.

The drive was predominantly motorways which made it pretty easy. The motorways in Slovenia require you to have a highway pass in the car due the motorways being toll roads. You can’t pay the at the tolls themselves. Because we hired the car in Slovenia we had a pass. If we had done this trip in reverse (hired a car in Italy) we would have never known and probably got a massive fine.

We were almost in Italy but decided to stop at a service station for the toilet and to get some food.
There were some pre-made rolls and paninis we both chose the “vege” one which looked like cheese salad.

It was horrible. We still don’t know what was in it, I think it was some sort of cheese but it had very little taste and the little taste it did have was disgusting, we both had to chuck the cheese away and try and eat a bit of the remaining roll. Luckily I also discovered Nutella B-ready, wafer bars filled with Nutella.

Soon after entering Italy we were greeted with one of many tolls.

At one of the tolls I occidentally drove in to the lane for cars with prepaid passes. I had to reverse out annoying a queue which had built up behind!!

It was a long drive, after 5 and a half hours we were getting close. Finally we left the motorway where we drove through the province of Rimini, finally in the distance we saw the medieval city of San Marino high up on the mountain in front of us.

After some steep winding roads we located the apartment. Keith had been messaging the apartment owner in English and she’d been replying in Italian but with Google translate it wasn’t a problem.

Her English wasn’t good but good enough to show us round, she had a card printed in English explaining how to get to the city and welcoming us which was nice.

The apartment was awesome. In a doorway there is a glass floor, under the glass there is a rocky area. Now I don’t know if this is just for show whether the apartment was built on some ruins of an old building. It looks cool though especially when lit up at night. 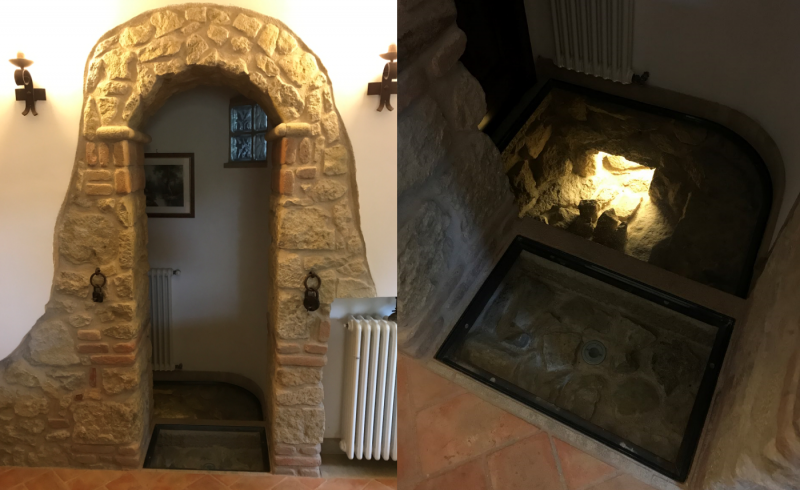 There was a random pond outside with some terrapins in it. 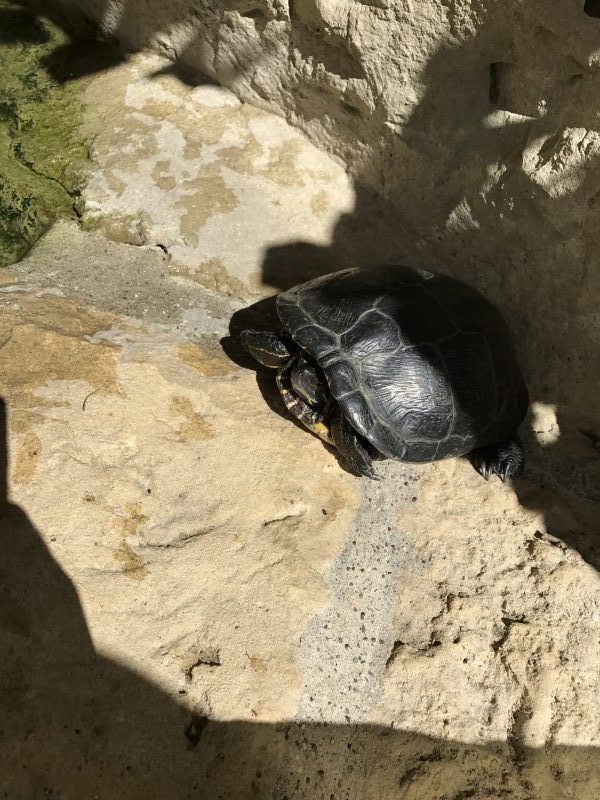 Some of the streets are very steep, all are filled with old buildings full of souvenir shops along with restaurants and weapon shops.

We wandered around trying to cover all the streets and I think we must have done most of it. 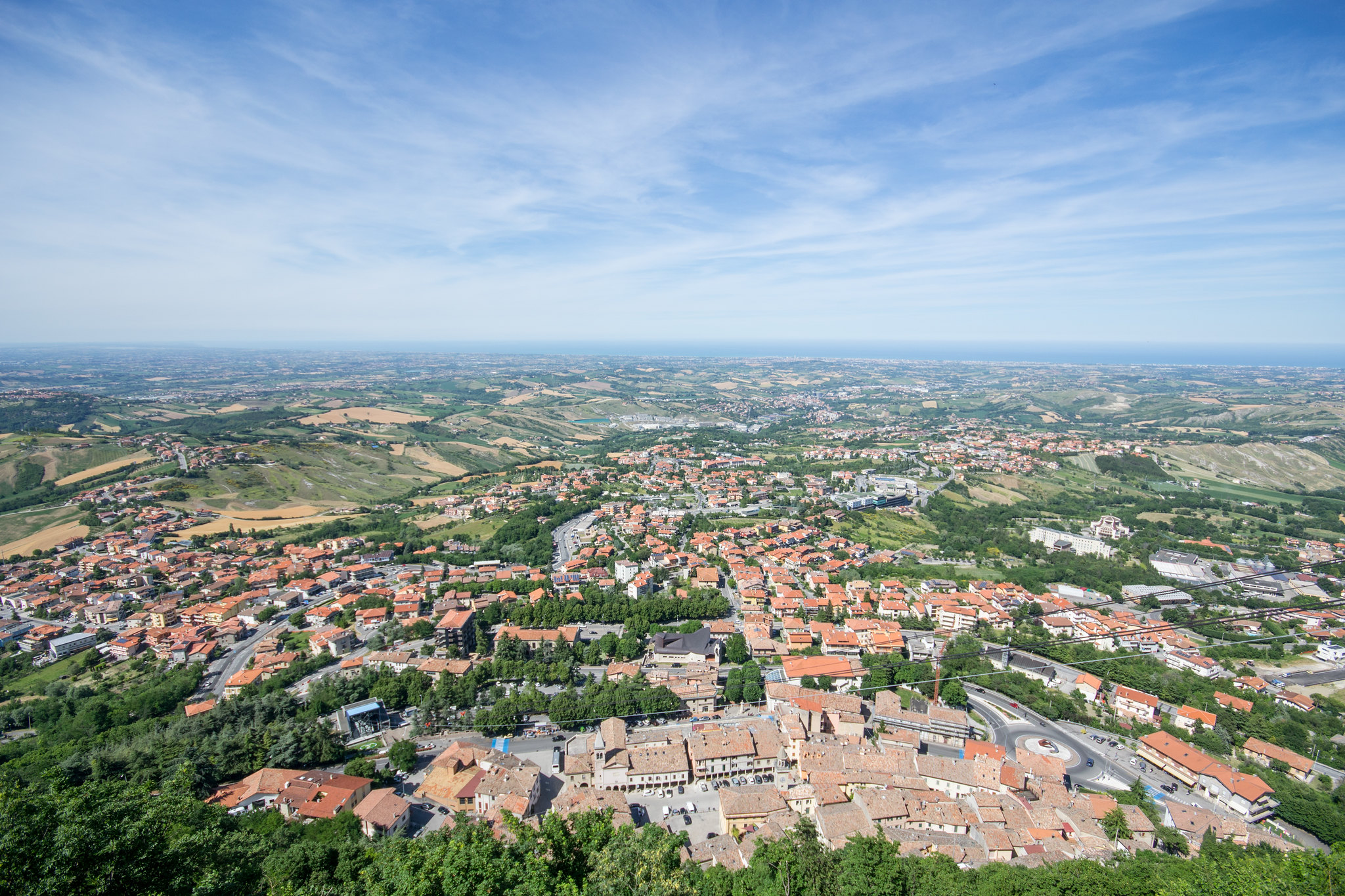 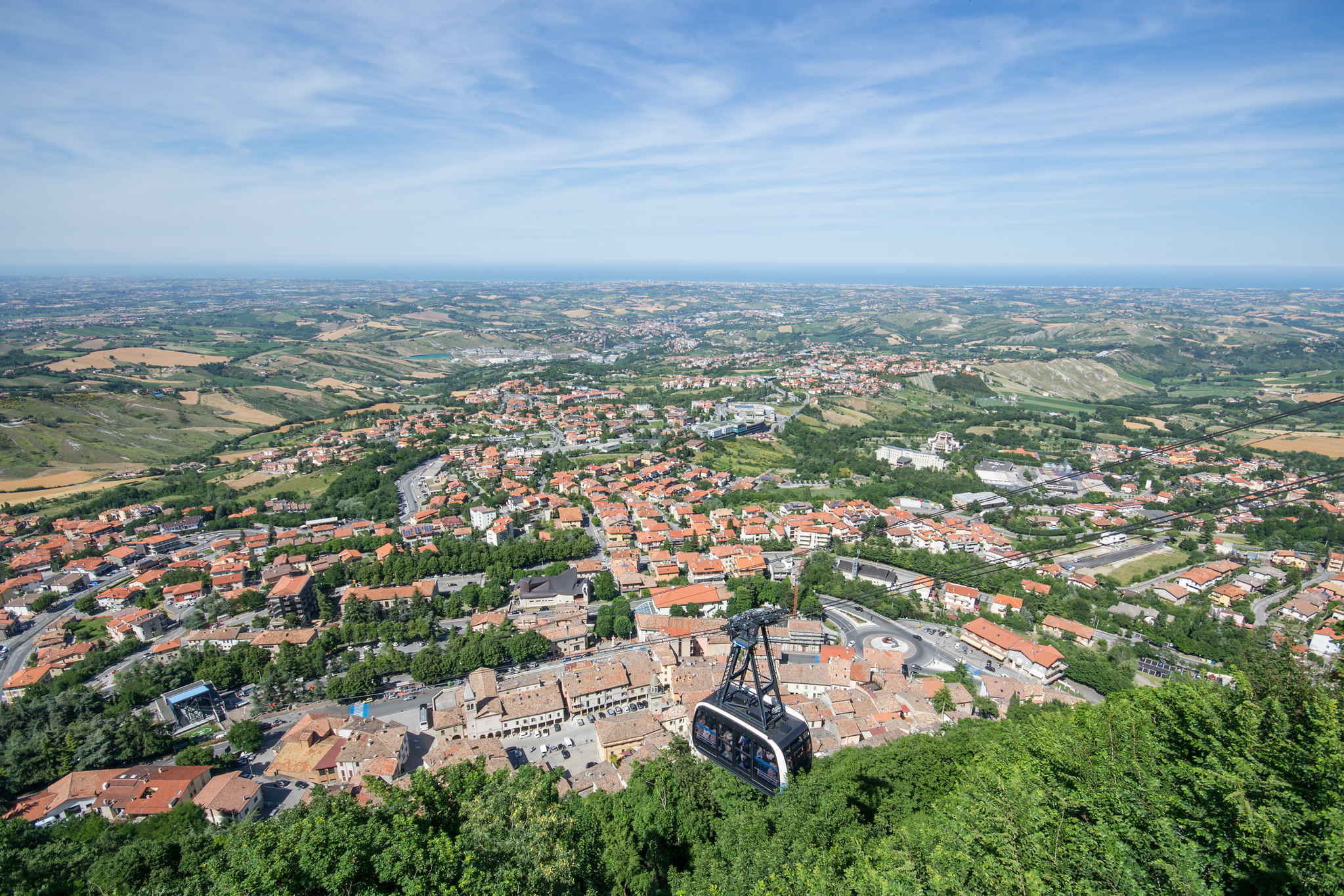 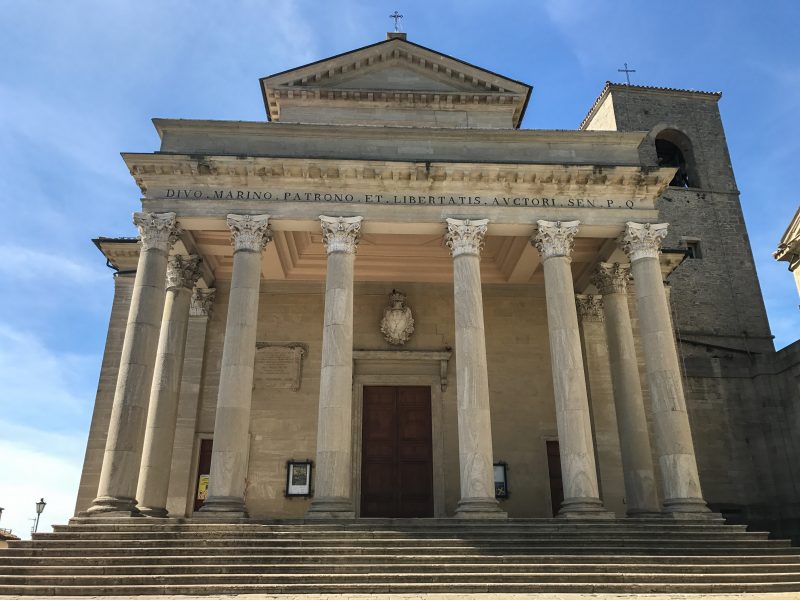 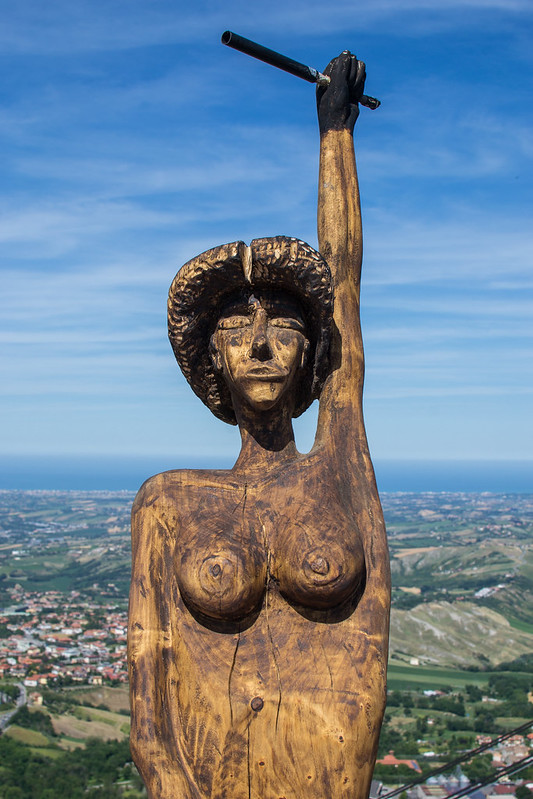 I went to the tourist information office, I’d heard they will stamp your passport for a small fee. It cost €5, they stick a stamp in the passport then stamp over it with an ink stamp. I thought it was nice souvenir.

Keith was feeling worse, it was pretty hot which probably didn’t help. He wanted to get some food before going back for some rest. The meal we had at a restaurant seemed a lot cheaper than in Slovenia and Italy.

It was still pretty early so I decided to go back out and try to get some sunset photos. 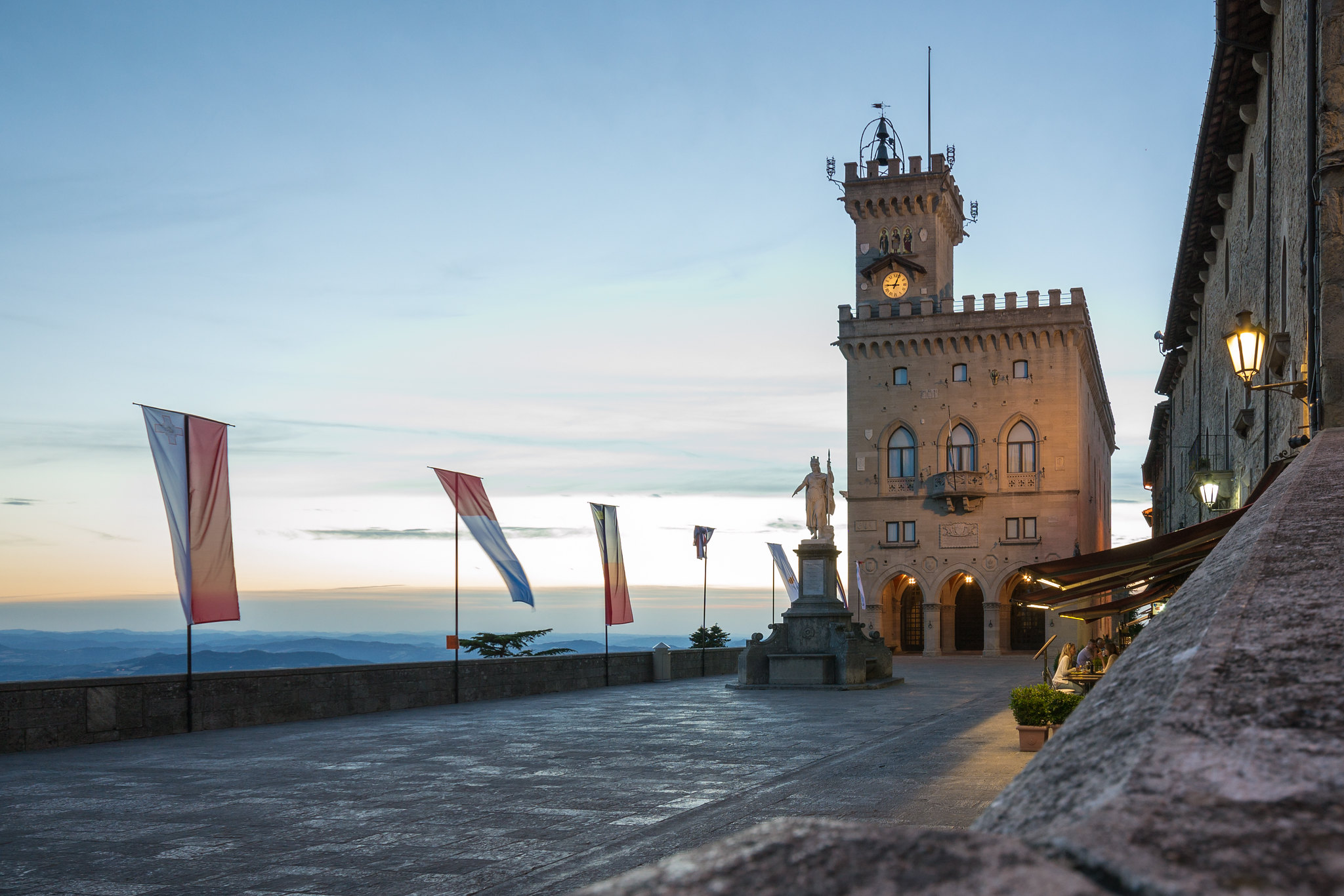 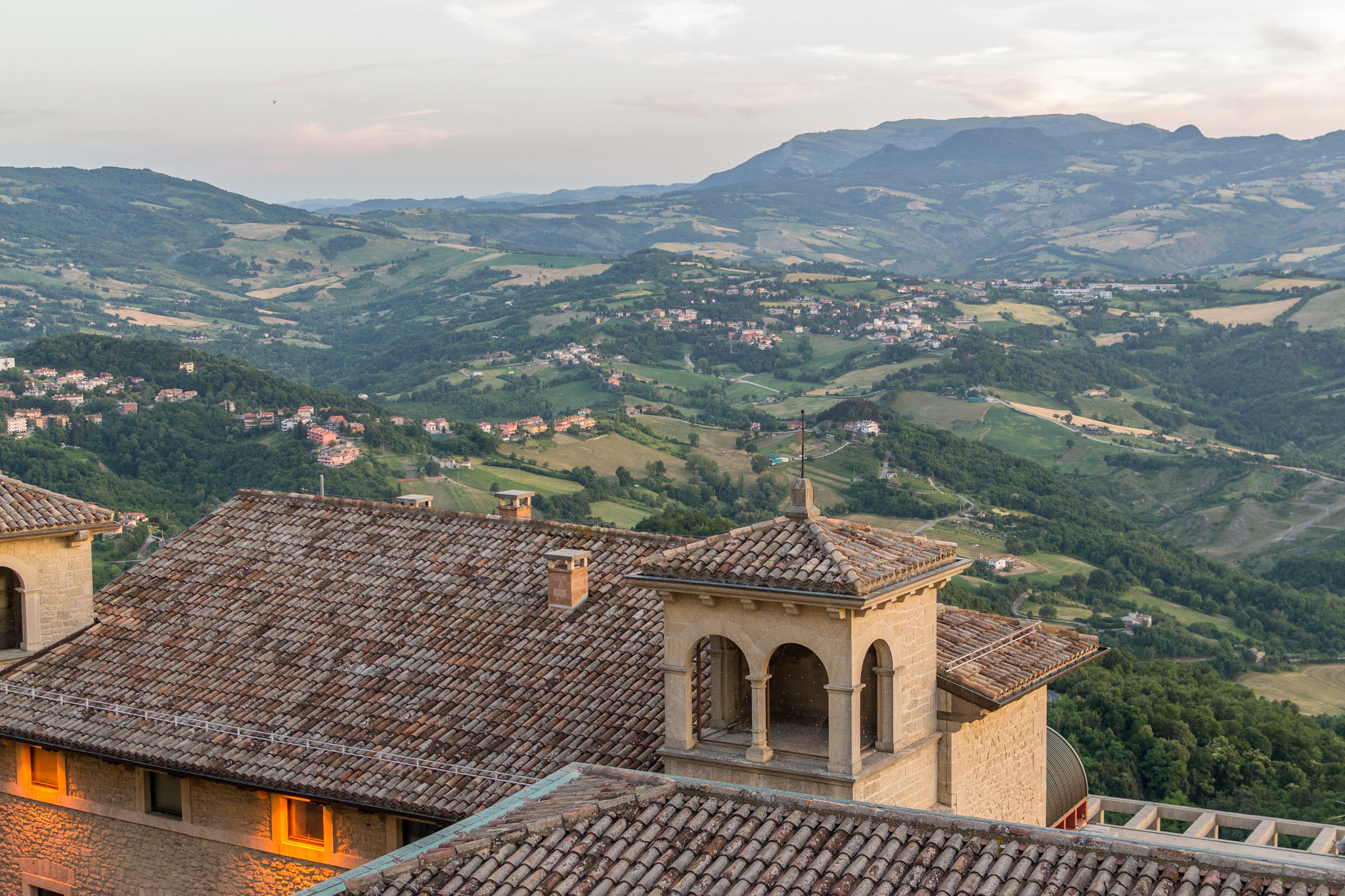 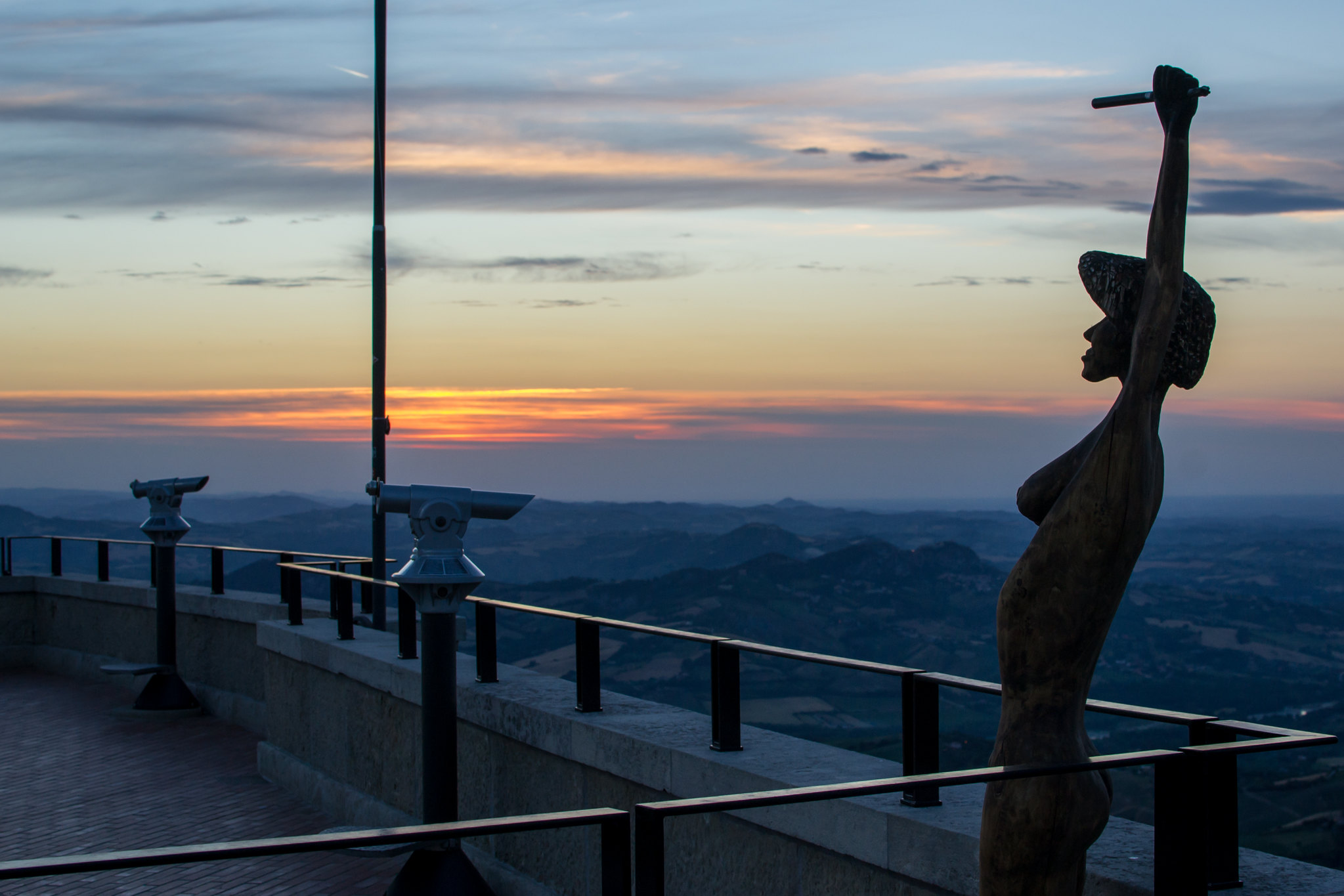 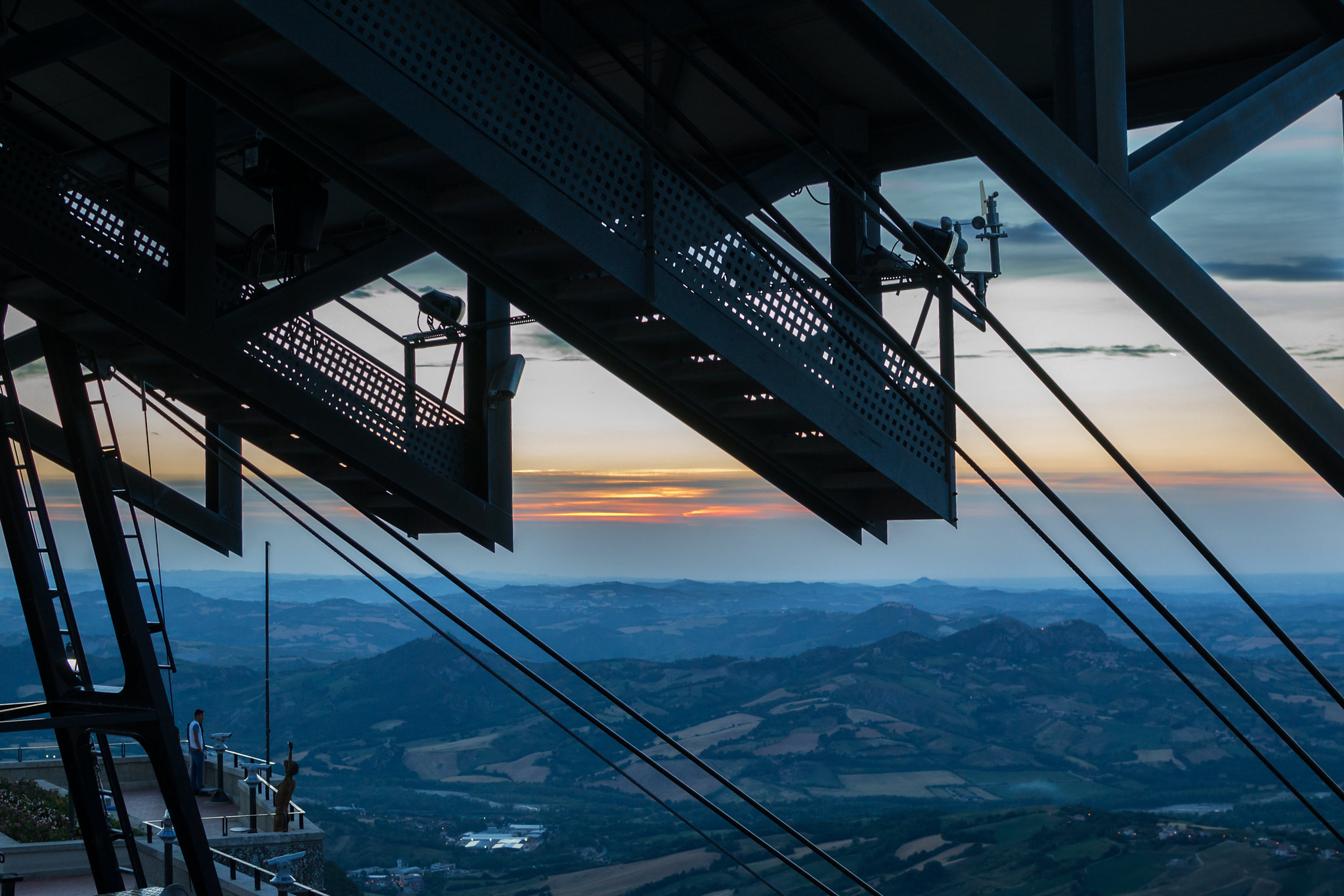 All the shops were closed, some restaurants were still open but it was very quiet (it was a Friday evening). 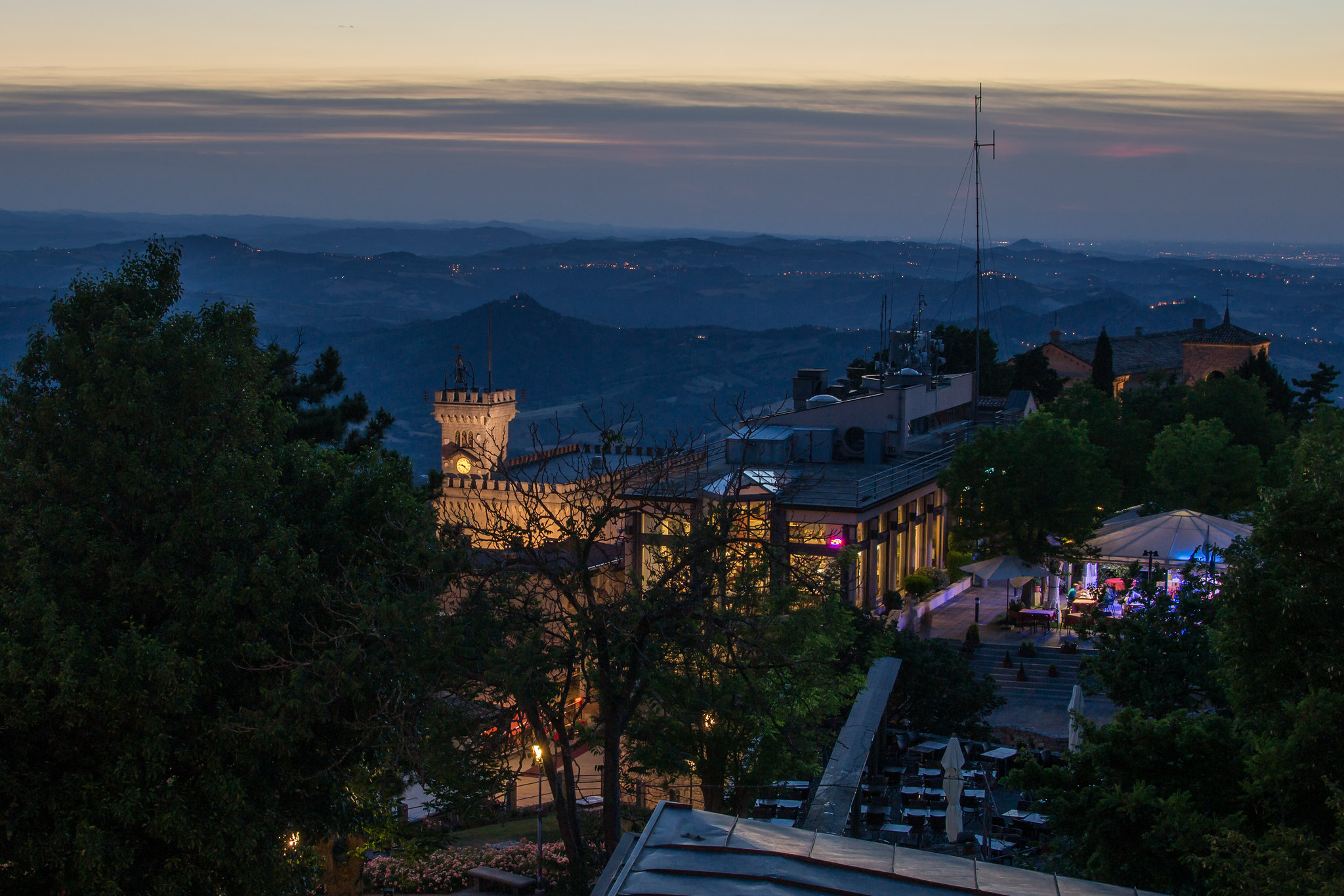 I ended up staying out for quite a while and exploring the city at night. 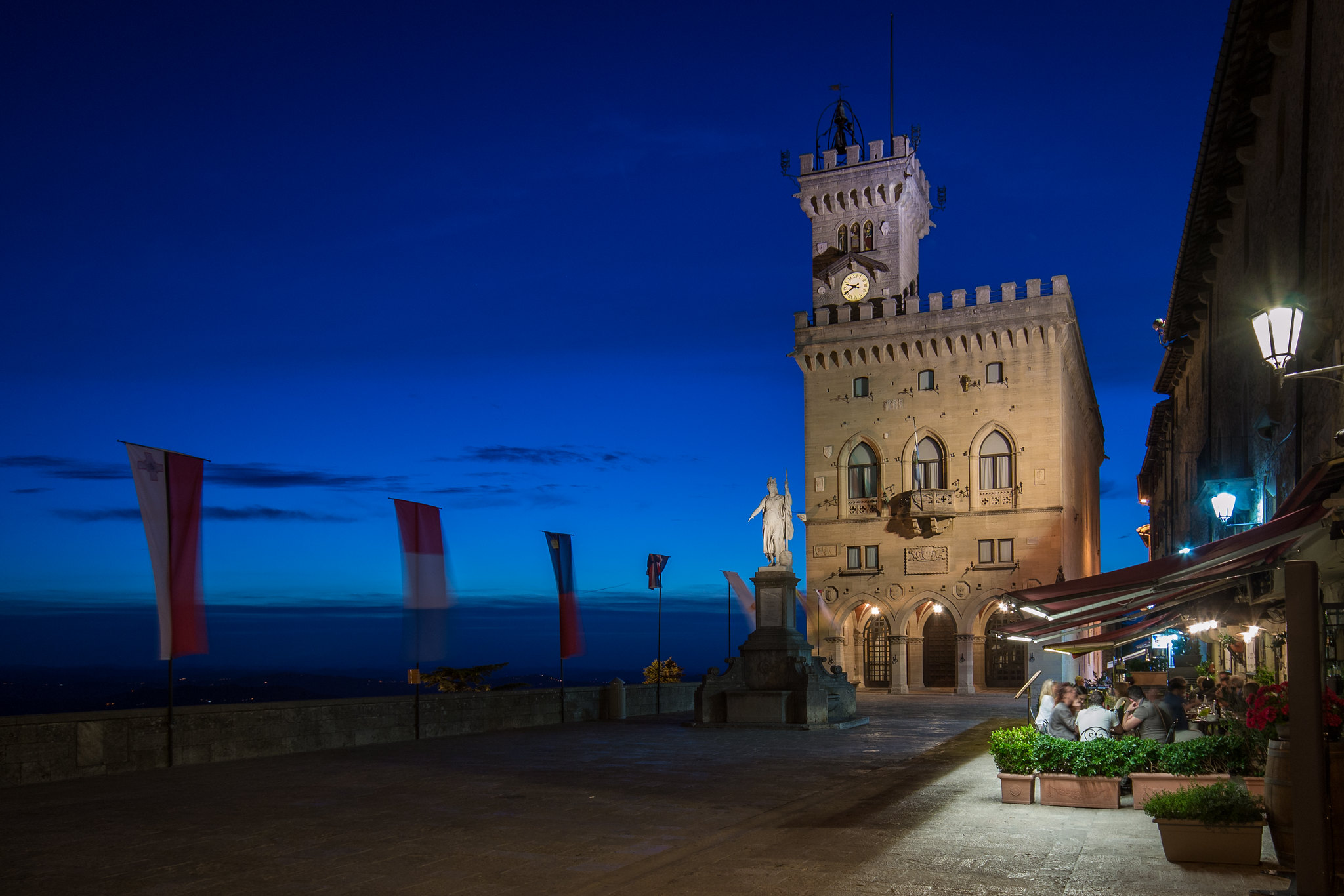 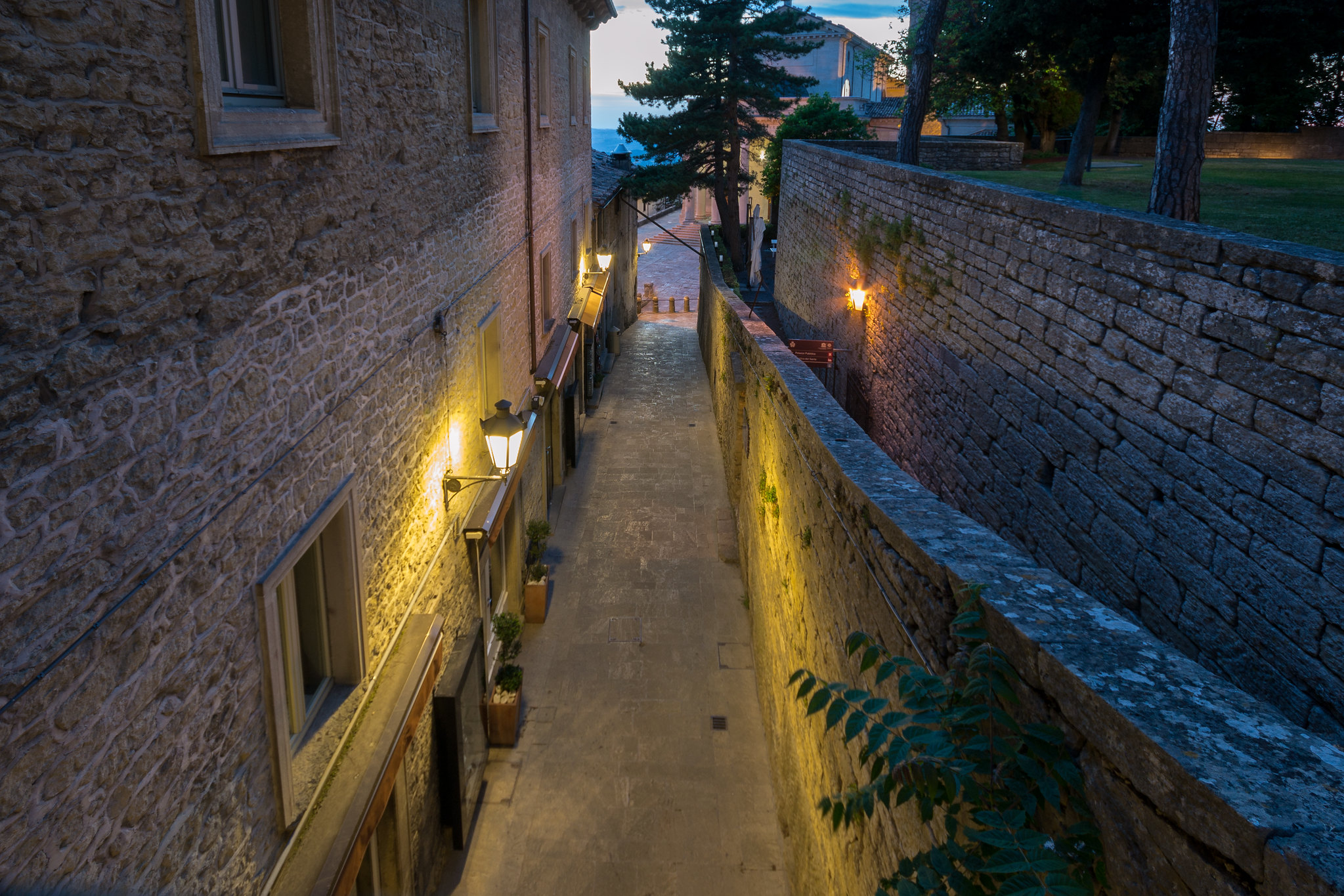 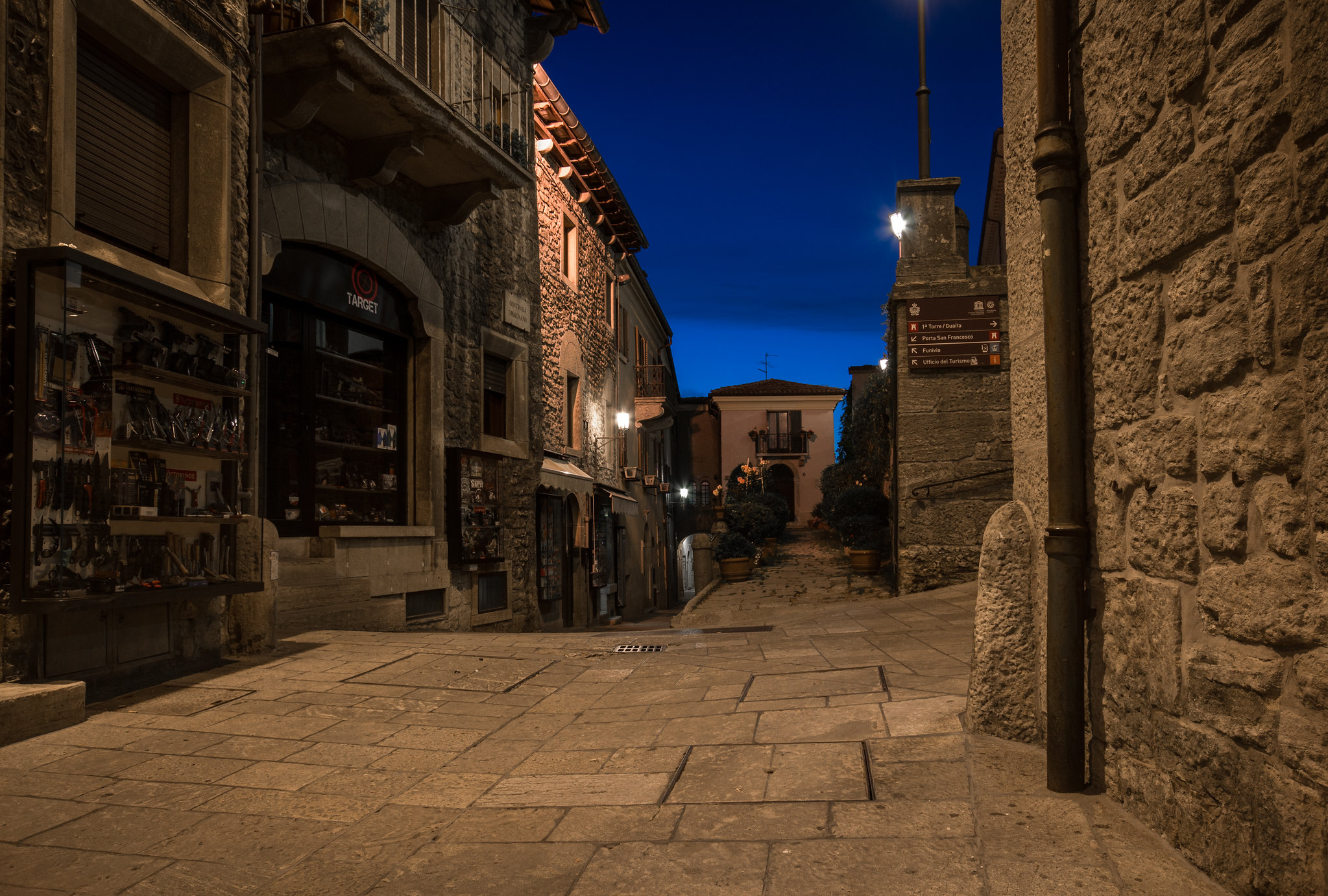 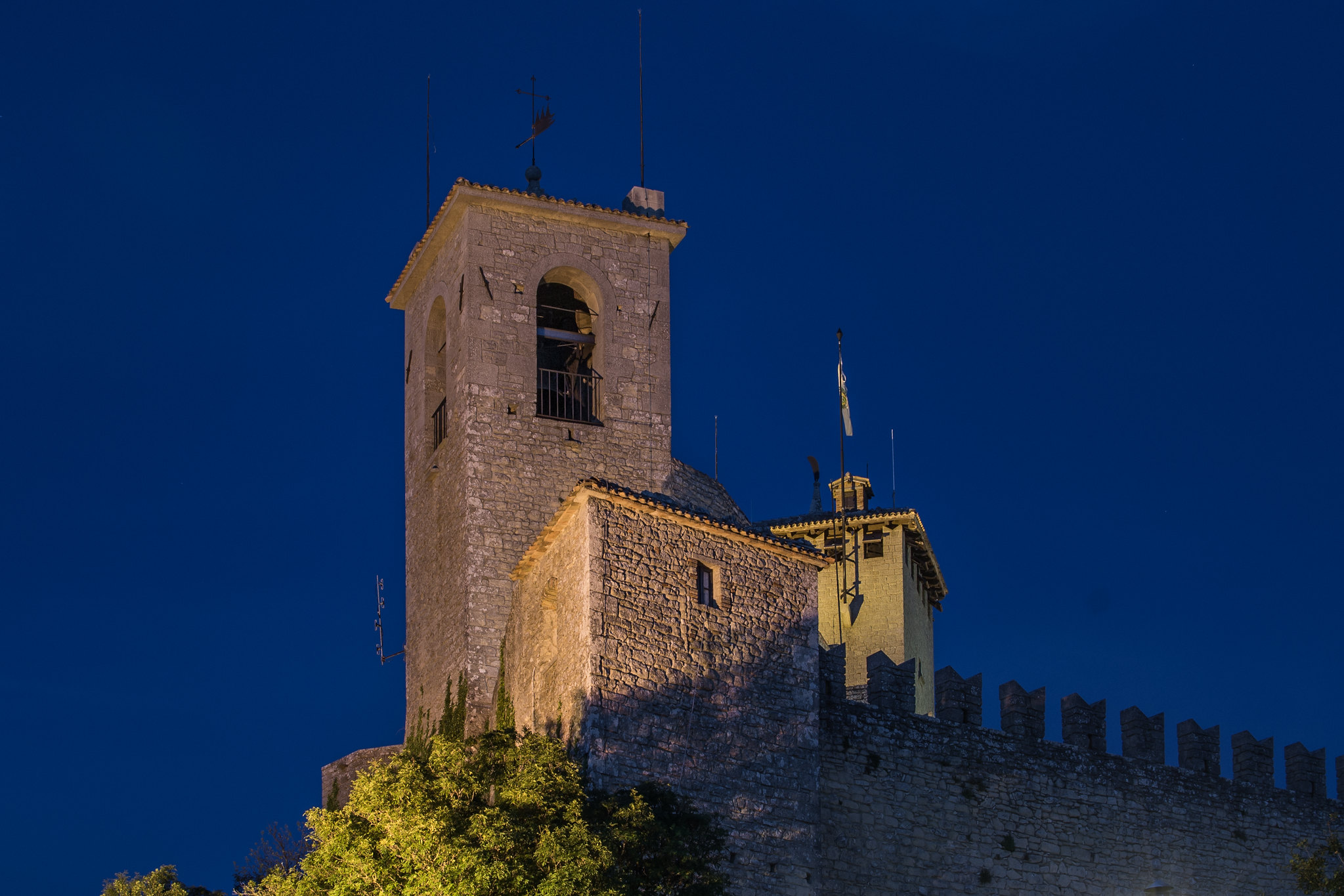 The apartment was so hot, in an attempt to get the aircon on I occidentally turned the heating on!!

Keith had to message the owner who told us the air con remote’s were in a drawer.

We checked out of the apartment and made the fairly short drive to the Italian coastal resort of Rimini stopping on the way to get a photo of San Marino from a distance. 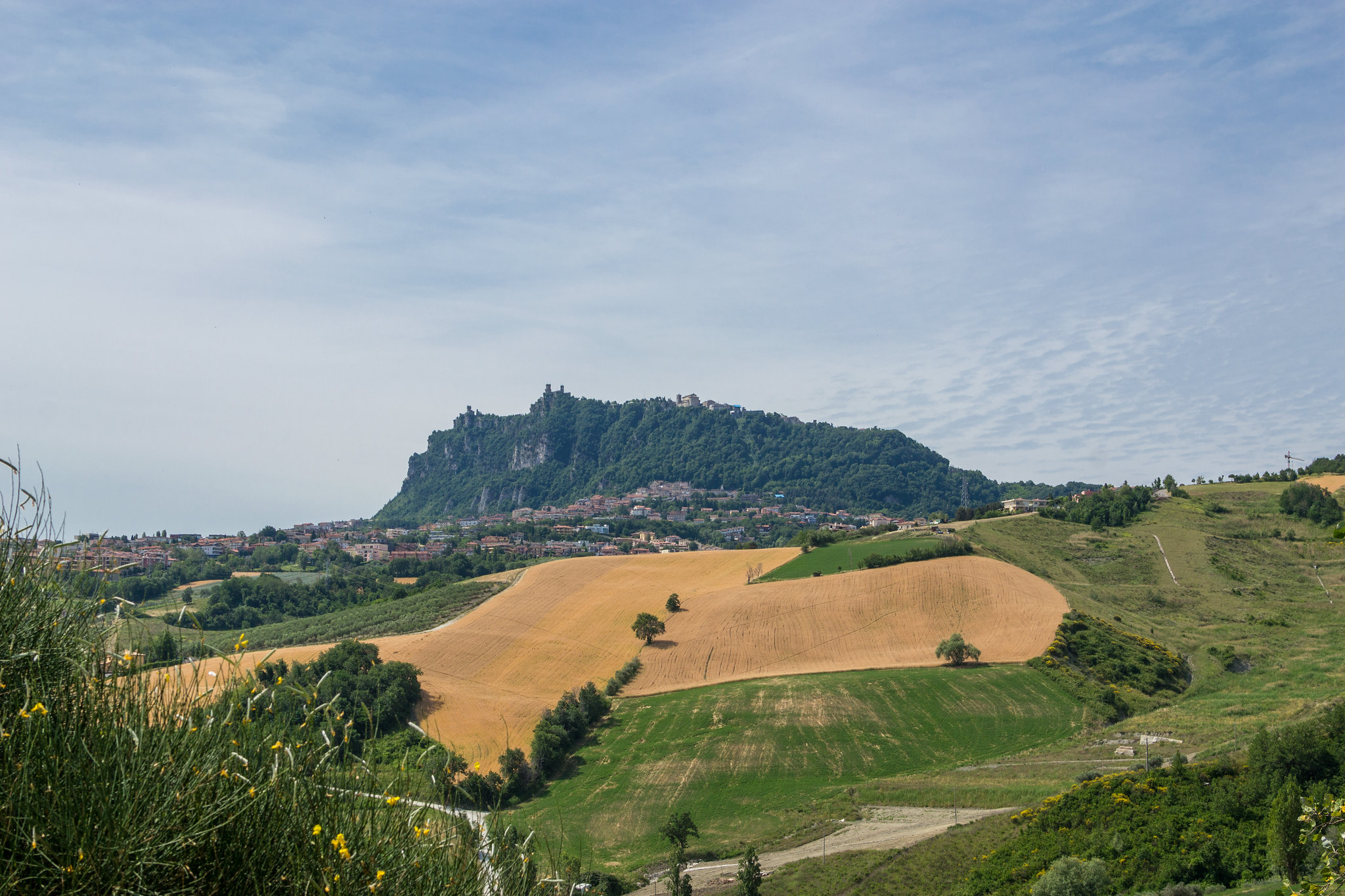 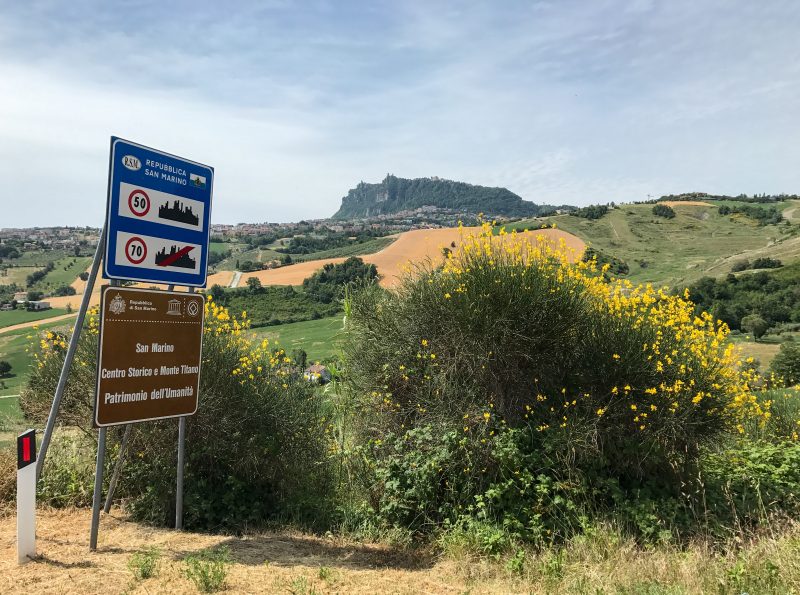