Our interest in these monuments started after seeing various websites with titles such as “Abandoned Futuristic Monuments in Ex-Yugoslavia”. The abandoned part isn’t strictly true. Most of the monuments are very neglected, some are not, few are totally abandoned. Most of the monuments are dedicated to events which took place during World War 2 and were constructed during the presidency of Josip Broz Tito in the 1960s and 70s. The monuments were designed by architects and sculptors making them all very unique, interesting, random and often epic especially compared with the monuments we have have in the UK which are quite often a concrete pillar or plaque.

It took a lot of research and planning to find the locations, work out routes and eventually go see them. Lots of the monuments are in quite remote settings. There are still quite a few we would like to visit so watch this space. The background information about them is taken from various websites so may not be 100% accurate.

So far our quest has taken us through Republic of Macedonia, Kosovo, Croatia, Boznia and Herzegovina and Montenegro. That’s 18 monuments so far.

The first monument to catch my eye was the Makedonium or Ilinden Memorial in Kruševo, Republic of Macedonia, it reminded me of a plant pot my mum used to have! I wanted to try and visit it in 2015 as part of a Euro trip we did but we just didn’t have enough time. It seemed like a good place to start for 2016. So in March Keith and I set out on the first adventure.

Below are all the monuments visited so far. I have embedded albums from flickr so scroll across to see more photos. I also had the idea of taking photos of the monuments with a disposable camera though unfortunately I kept forgetting to use it.

Ilinden, also known as Makedonium is a monument in Kruševo, built by Jordan Grabulovski and Iskra Grabulovski. It opened on August 2 of 1974, it is dedicated to all the fighters and revolutionaries who participated in the Ilinden uprising of 1903, as well as soldiers-partisans of the Macedonia National Liberation Struggle 1941-1944.
Unfortunately at the time of our visit the building was closed. 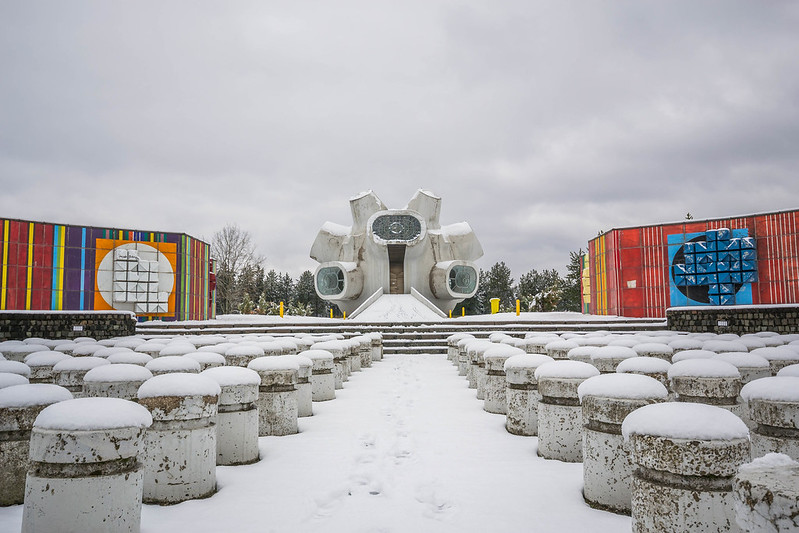 Monument to Freedom, Kočani, built in 1977. Dedicated to fallen fighters from Kočani and neighbouring places in WW2. It was designed by Gligor Cemerski. 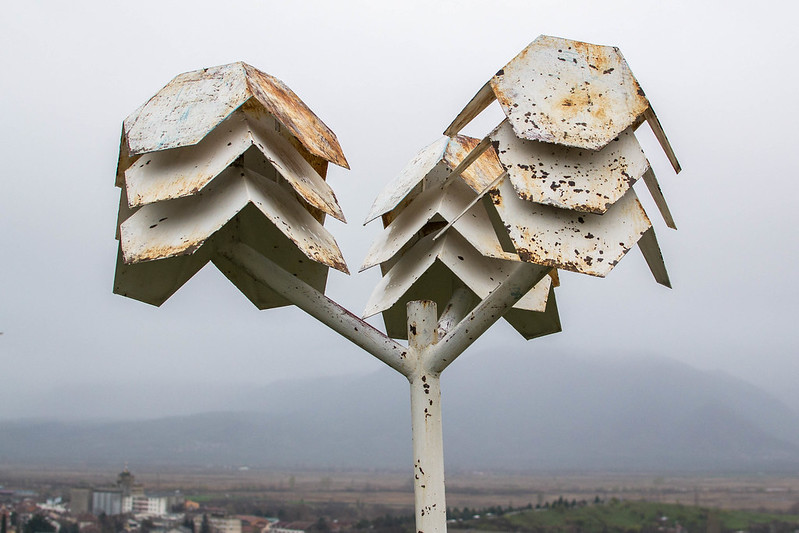 Mausoleum of the fallen fighters and victims of fascism, Kavadarci, Republic of Macedonia

It is an ossuary or mausoleum, a place where the bones of the soldiers fallen during World War 2 from the Tikves region are buried. Designed by Peter Mulichkoski. 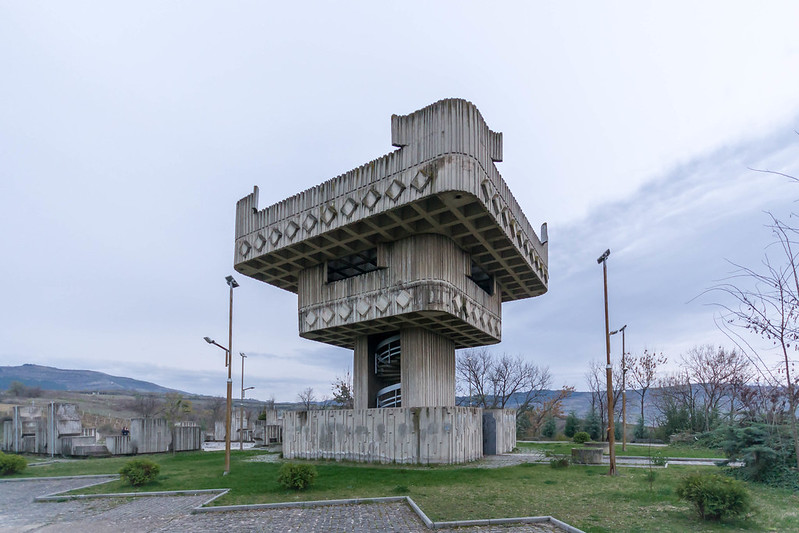 It honours the partisans that died during the liberation of the region in World War II. 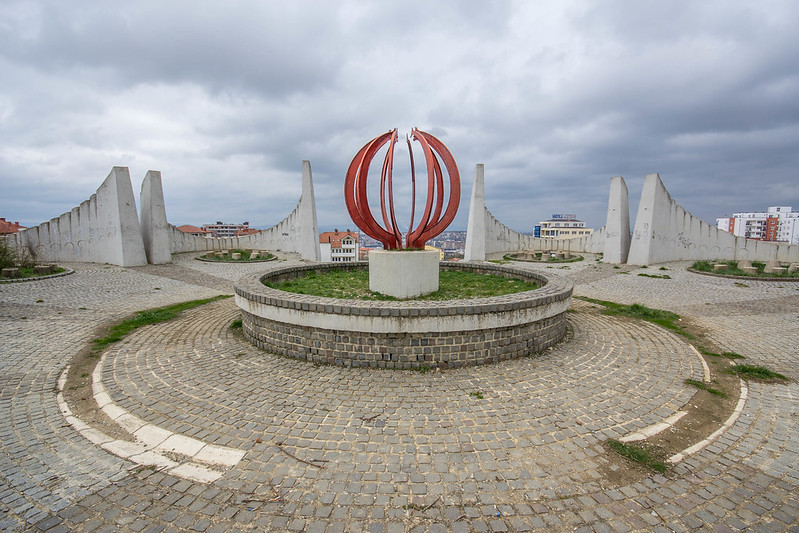 We were in two minds over visiting the next pin on our map due to the UK governments advice on the area. The Miners Monument is situated in the Northern half of Kosovo, in the Serbian part of the town of Mitrovica.

Foreign & Commonwealth Office warning:- The security situation in Kosovo remains calm but tense. There have been violent clashes in the north and incidents involving grenades and vehicle explosions in northern Mitrovica. Incidents in the south are rarer, but violent demonstrations have occurred in Pristina. Northern Kosovo
The FCO advise against all but essential travel to the municipalities of Zvecan, Zubin Potok and Leposavic, and to the northern part of the city of Mitrovica due to occasional violence and security incidents there.

This was a little off putting and we debated whether or not it was worth it just to see a monument, we decided it was.

The town looked like any other European town, apart from a couple of UN vehicles and increased police presence.

We got flagged down by the police who were in a layby.

They asked to see our documents, I handed them over. Could our monument dream be over when we’d got so far??? No chance! When the officers saw we were English they didn’t even bother checking the documents, just handed them back and waved us on.

Two columns holding a mining cart represent the mining tradition of the city. The monument is a memorial to Mitrovica’s Albanian and Serbian miners who lost their lives during World War II, symbolising unity between the ethnic groups. After Yugoslavia disbanding, tensions between Albanians and Serbs and the Kosovo war has caused the monument to lose some of its significance.

It was built in 1973 by the architect Bogdan Bogdanović 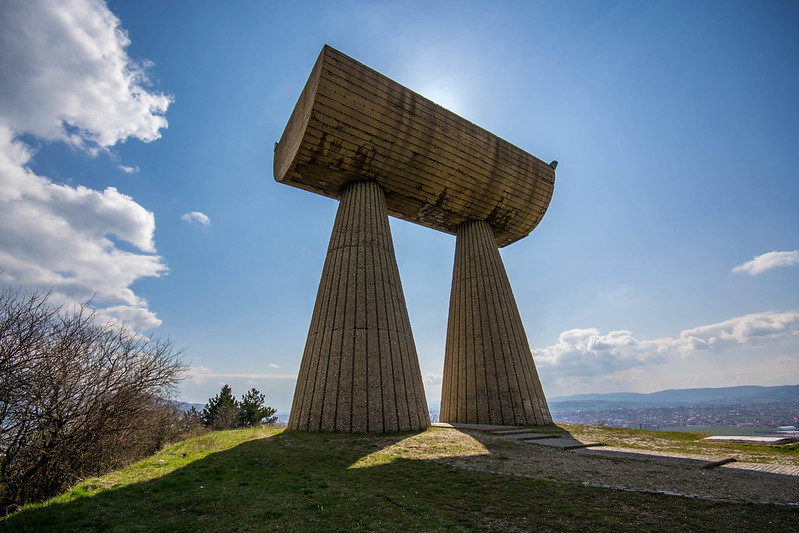 Monument to the Revolution of the people of Moslavina, Podgarić, Croatia

Monument to the Revolution by Dušan Džamonja is dedicated to the people of Moslavina during World War II. It is really cool and epic and such a interesting design.

There is a plaque which reads (translated by google translate): “Buried here are more than 900 soldiers from a wider area Moslavina who sacrificed their lives for freedom and independence of our nation during the national liberation struggle from 1941 to 1945.” 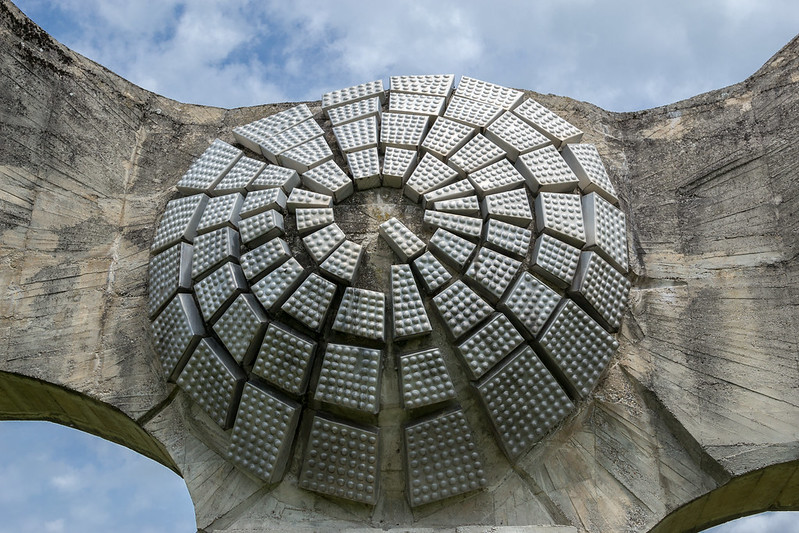 The stone flower (actually made of concrete) is set in a picturesque location next to a lake, formerly the location of the Jasenovac concentration camp during World War 2. It is a memorial to the victims the concentration camp. Around 100,000 people were killed there. It was designed by Bogdan Bogdanović.

The flower is a symbol of eternal renewal, as a connection between the victims and new life (from the website below). 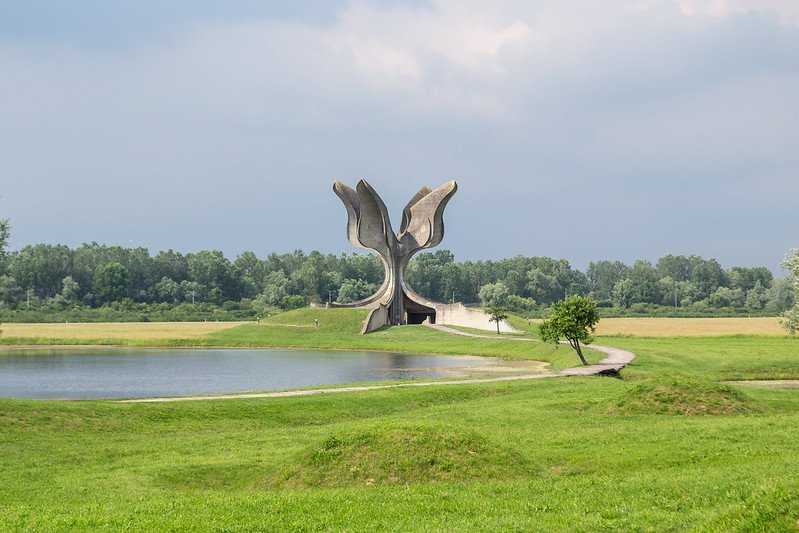 Monument to the uprising of the people of Kordun and Banija, Petrova Gora, Croatia

The Ustaše took control of Croatia during World War 2 after the Axis powers invaded Yugoslavia.They were a a Croatian fascist, ultranationalist and terrorist organization. The monument is dedicated to the struggle and suffering endured by population in the region. The first partisan units in Kordun and Banija; Croats and Serbs fought together against fascism and occupation. The construction of the monument was completed in 1981.

This main building is clad with stainless steel sheets, many of which been stolen. It was designed by Vojin Bakić and completed in 1981.

The building is in a very derelict state; all doors are open bar one where you can hear an electrical humming coming from inside, it must be the plant room for the telecommunications equipment on the roof.

The basement and lower floors were quite eerie, it really sounded like there were other people inside the building but it was it was just the noise of wind and rain. 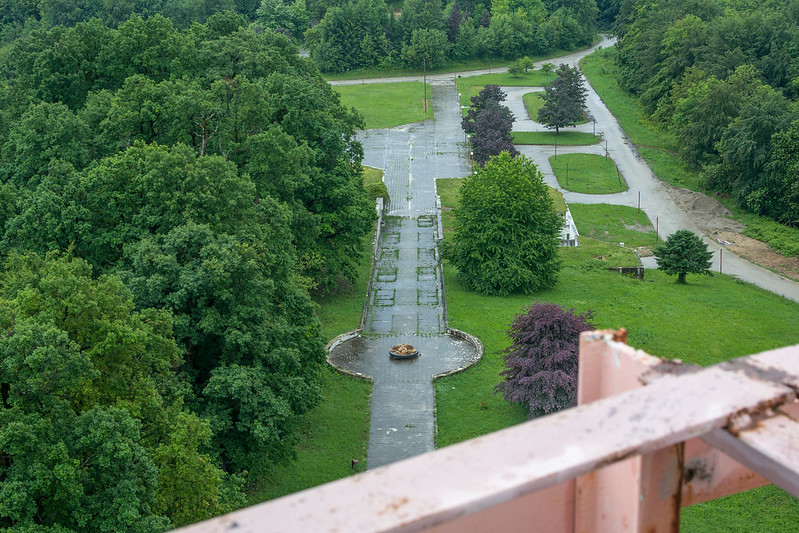 The Ruduši monument at Sinj was one of the easiest to get to. It is a very simplistic design compared to some of the others we had visited.

The monument was erected in 1962 in memory of the executed captured soldiers of the First Split Partisan Unit during World War 2. 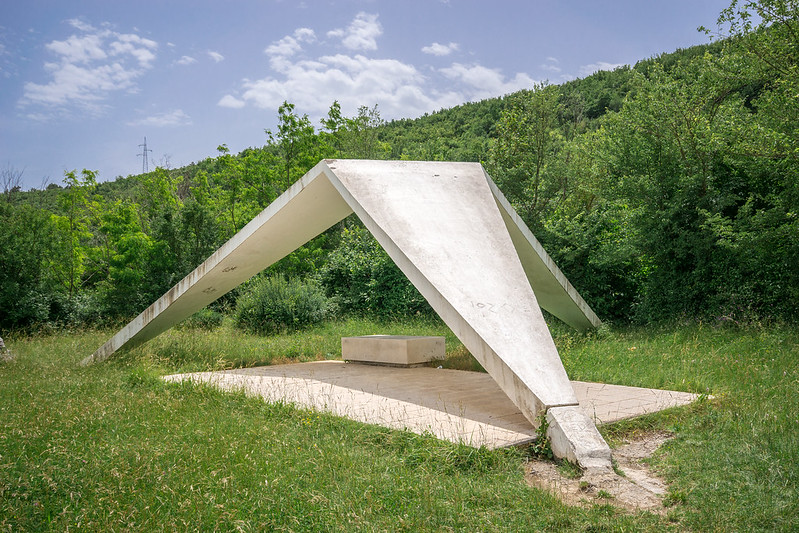 We parked up as close to the pin on my map as possible, we found a narrow over grown track heading into the woodland that seemed to be in the right direction. It was a long trek up a hill. The monument came into view and it was really overgrown, again it was huge in comparison to what I expected from the photos seen online.

I’d never seen an really old photo of the monument and it wasn’t until I’d walked around the back that I realised it used to be vertical; you can see rebar sticking out from the fallen structure.

By doing some research I found some old photos and bit of information on it.

The monument is dedicated to the soldiers who liberated the city of Knin during World War 2. It was a difficult 15 -day struggle against 8,500 Germans , 3,500 Ustashe, 629 partisans from Dalmatia mostly Croats were killed .

The monument was blown up in 1990s war. I found a scanned in page from a Croatian book on a facebook group, I translated it using google translate and a bit of common sense, it asks the question “why did the people who participated in the war from 1991 to 1995 destroy the Liberation monument 1941-1945 and profane the victims of the Croatian people who gave their lives for survival and freedom? How would you feel if those same wreckers that started to demolish the monument to the Homeland War? That would be a crime.” 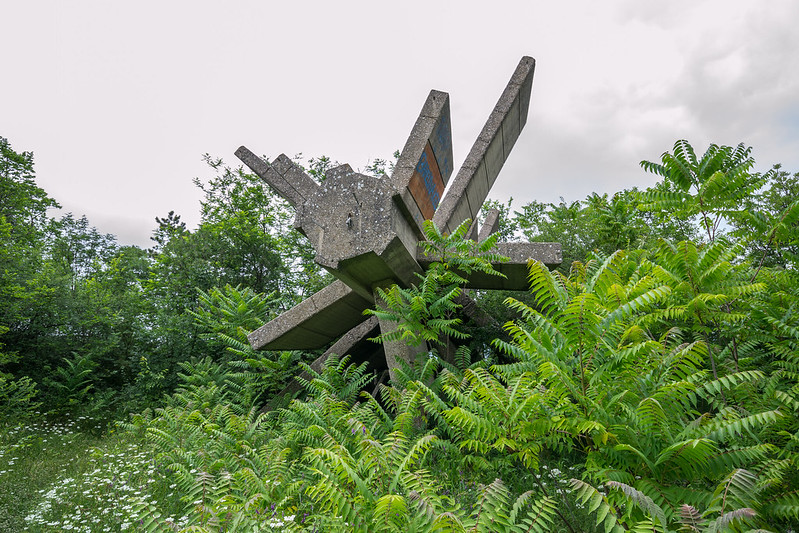 The Šušnjar Memorial is dedicated to the victims of the Ustasha massacre of 5,500 Serbs and 50 Jews that took place on 2 August 1941 during World War 2. It is located in Sanski Most at the scene of the crime. 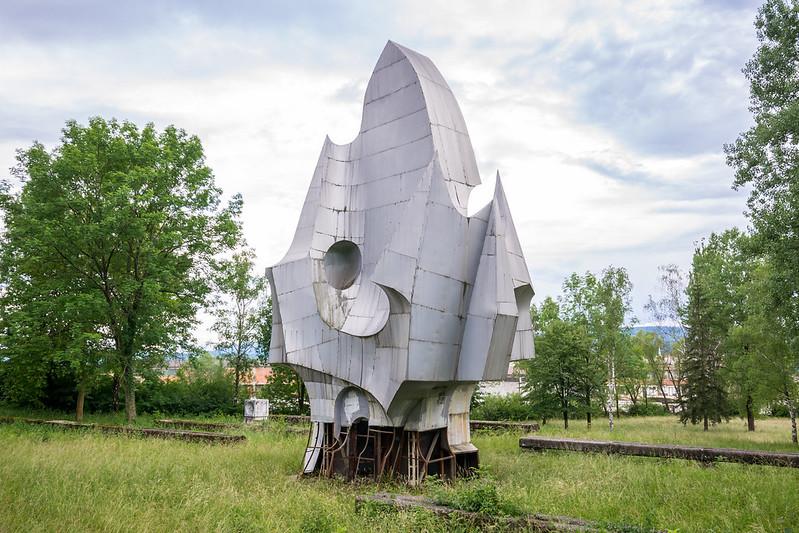 Monument to the Revolution in the Korčanica memorial zone, Grmeč, Bosnia and Herzegovina

Monument to the Revolution, Grmeč. The memorial centre of Korčanica commemorates the liberation of Sanski Most during World War 2.

The monument was really cool but very neglected. 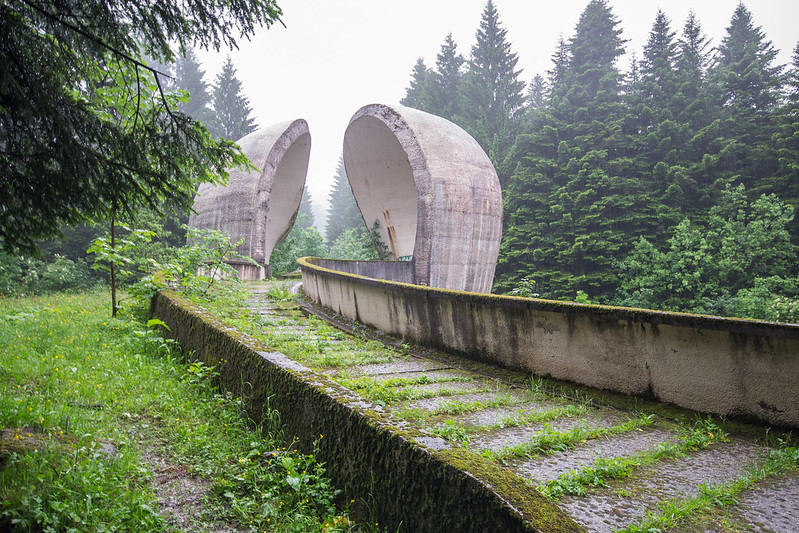 Monument to the Revolution, Kozara, Bosnia and Herzegovina

At Kozara in 1942 during World War 2 there was fierce battle where 45,000 enemy soldiers fought against 3,500 partisans (Europe’s most effective anti-Axis resistance movement). According to wikipedia 2.500 Yugoslav partisan fighters and 68.500 of civilians were killed or deported to Ustaše concentration camps. The battles at Kozara lasted for all four years, but the region was never conquered by the enemy.

The monument is located within a national park. 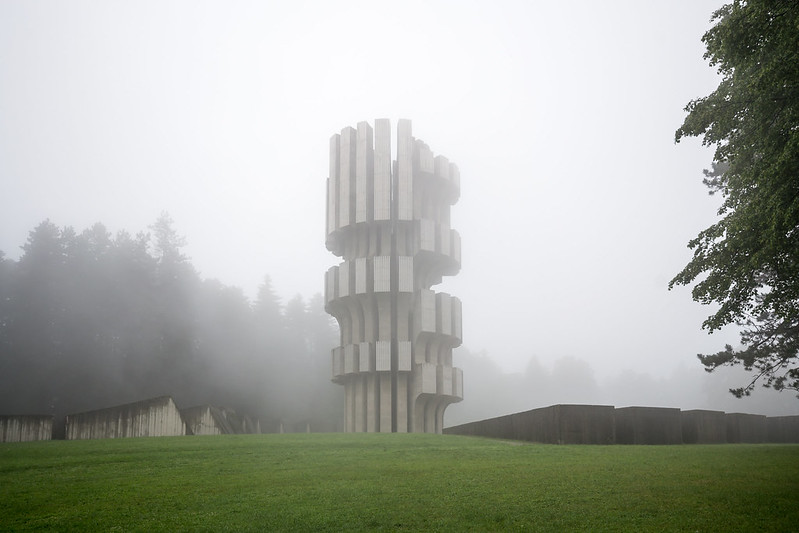 Located on the Smetovi mountain; the monument was built in 1968.

It is dedicated to fallen fighters of Zenica Partisan Detachment – an anti-Nazi resistance movement. 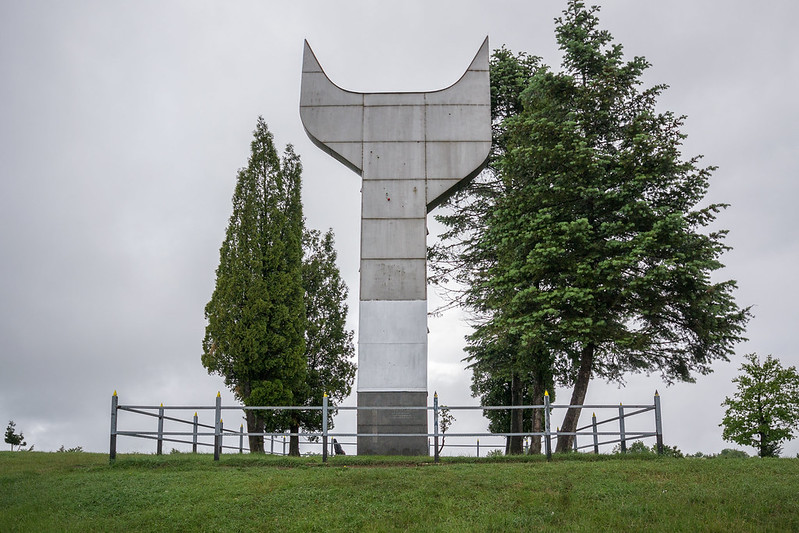 It commemorates the battle of the Sutjeska during World War II. Over 7,000 people were killed, but the Yugoslav forces were able to foil a Nazi plan and escape. 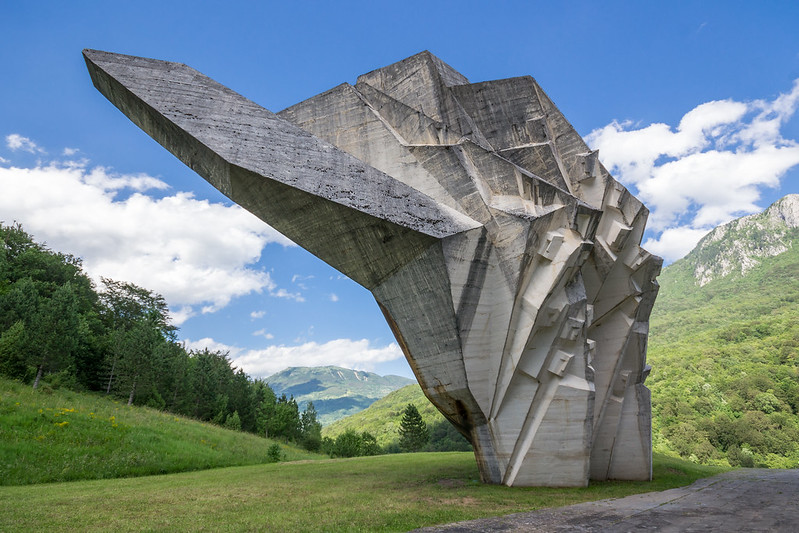 Grasshopper on my bag in front of spomenik #spomenik #bosniaherzegovina #tjentiste

The monument which sits on the edge of the mountain looking over Mala Plaža (small beach). Searching the internet to find what it is in honour of doesn’t really come up with anything concrete but it seems to be dedicated to Montenegro’s war times specifically the Yugoslavian air force. 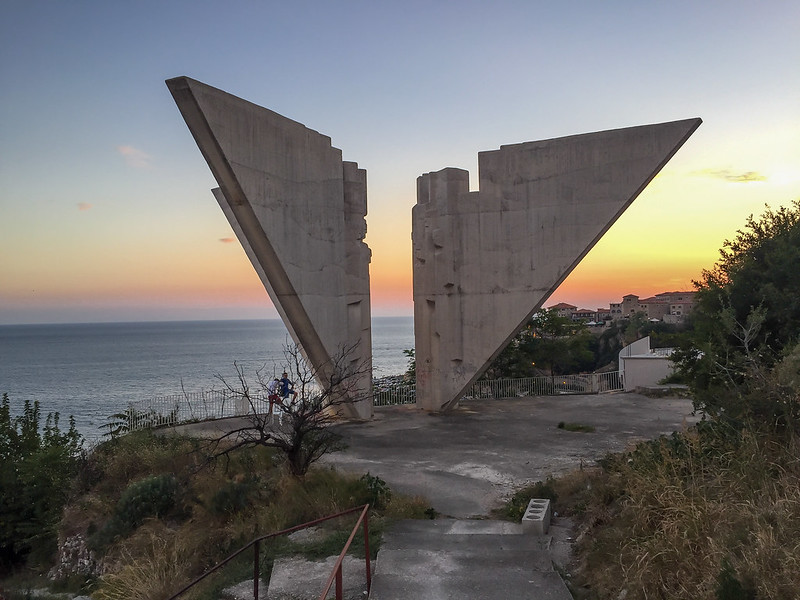 It honours the 32 patriots from Nikšić Monument to fallen patriots, who were executed by Italian fascists during 1942.

Most of the monuments we have visited have been very remote and we’ve barely seen a soul around, this one is not quite as remote. There is a path that runs in front of it where we saw joggers, people walking dogs and kids hanging around. 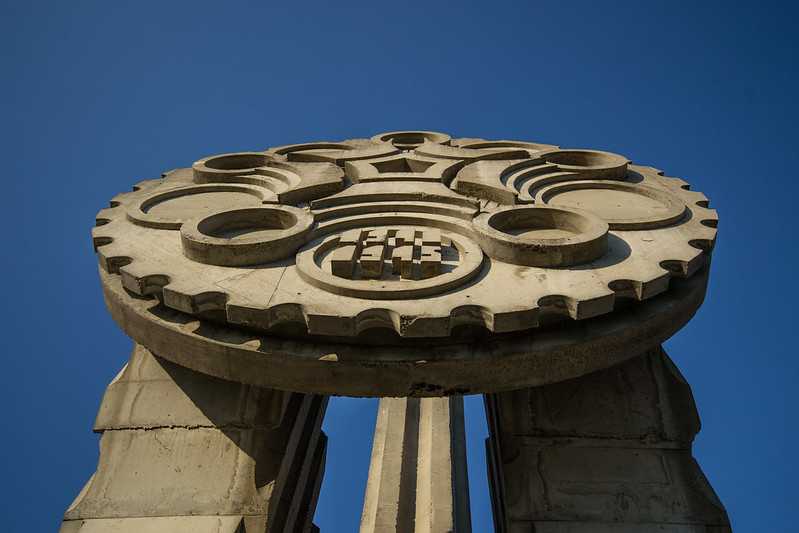 The monument was; like most others we’ve visited kind of neglected and overgrown but still impressive. 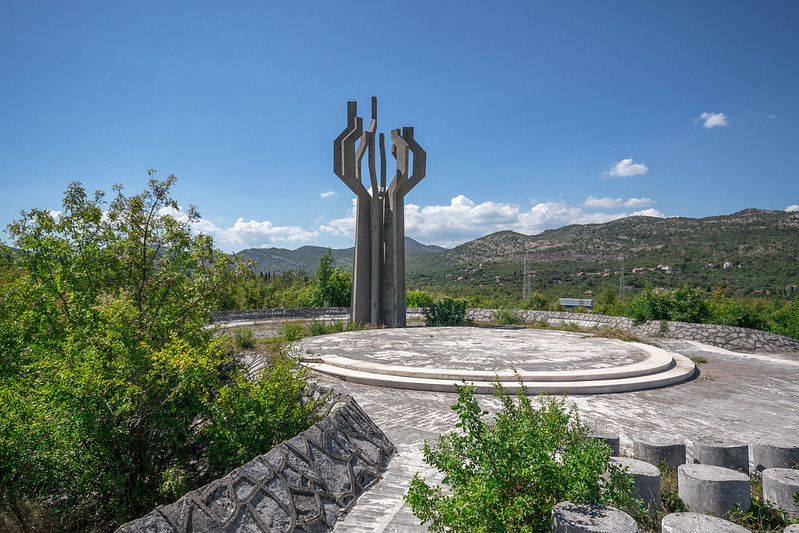 Monument to the Battle of Dražgoše, Slovenia

The monument seemed to be very well kept compared with most of the others we’d visited, it looked quite new; though it wasn’t, it was completed in 1976, maybe it had had some restoration work done on it fairly recently, who knows.

In January 1942 the Cankarjev Battalion tried to stop Nazi German troops advancing towards the village of Dražgoše. They fought to prevent the deportation of locals. The village was destroyed by the Nazis who had lost over 100 soldiers in the battle. They shot 41 hostages and deported the remaining residents. 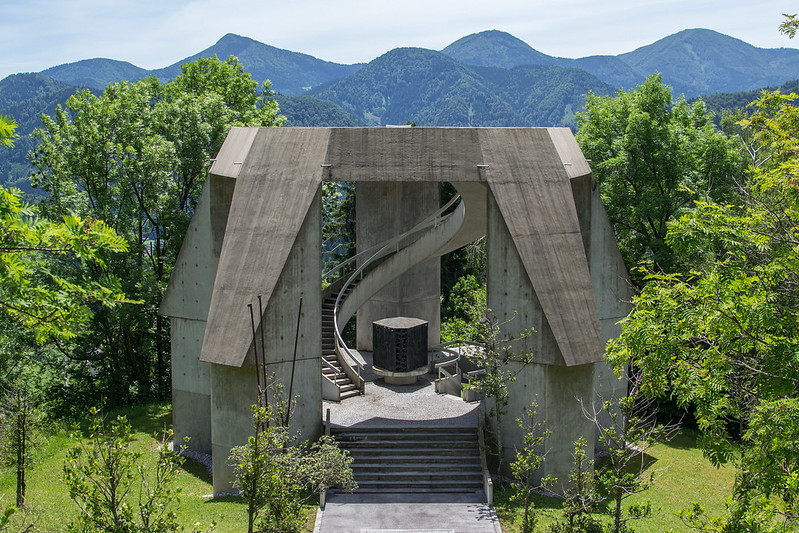 It is within the memorial park in the town of Ilirska Bistrica. The momunment is dedicated to the fighters of the 4th Yugoslavian Army who liberated this area during WWII. 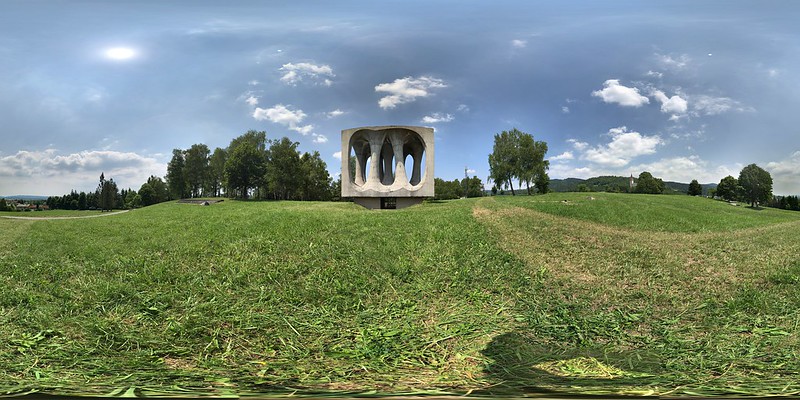 Other random monuments spotted during our travels…………

It is very close to the Mausoleum of the fallen fighters and victims of fascism, not sure what it is in honour of. 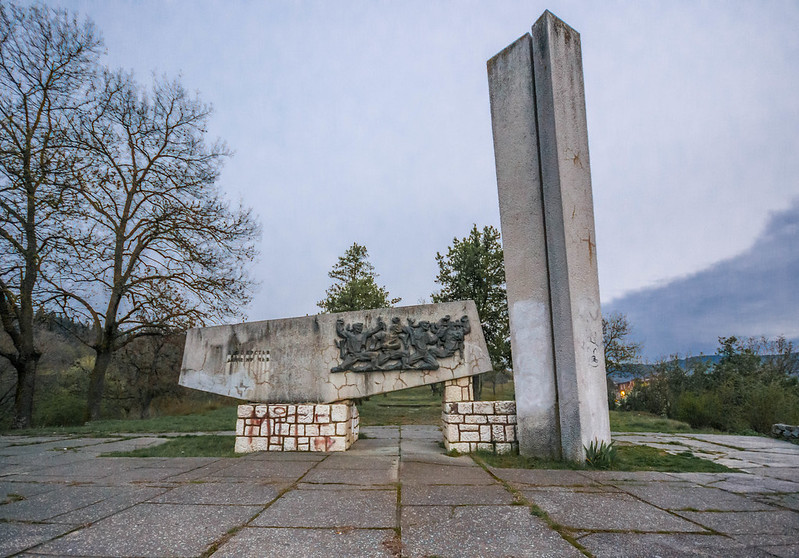 It is a symbol of the Brotherhood and Unity between three peoples of Kosovo: Albanians, Serbs and Montenegrins. 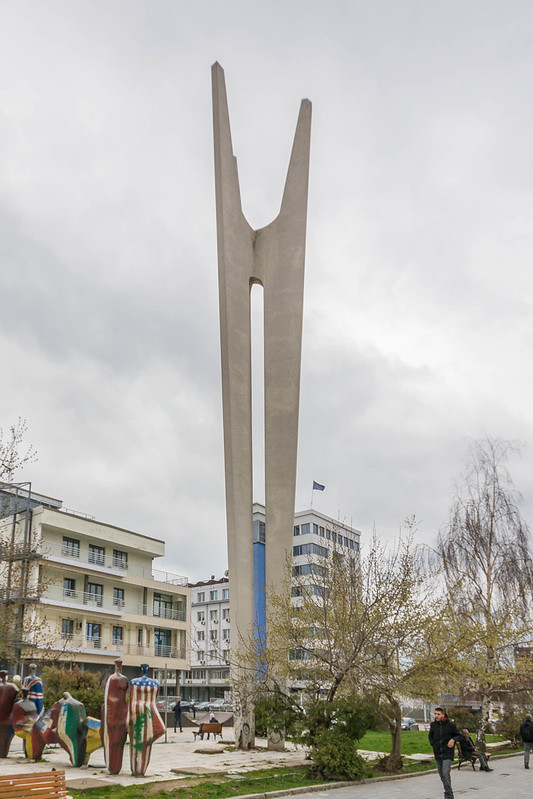 Spotted this while playing Pokemon Go in Montengero, it was a Pokestop. Not sure what it is in honour of.

Again I have no idea what it is in honour of.

Kolašin town hall seems to be on a lot of those futuristic Yugoslavian monuments/spomenik websites but as far as I can tell, where all the others are monuments dedicated to events/battles/ people during WW2 this seems to purely be the town hall. Although it some of it looks abandoned I don’t think it is, in fact the door was open and the man inside let us have a look round. 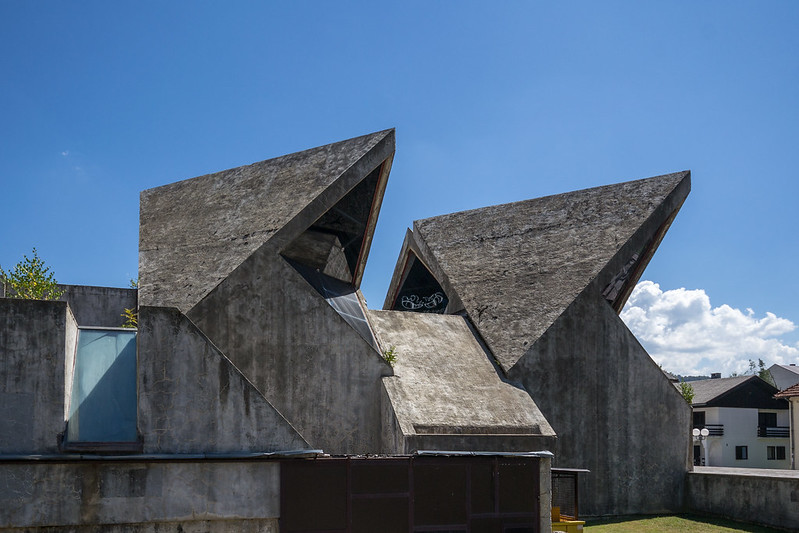